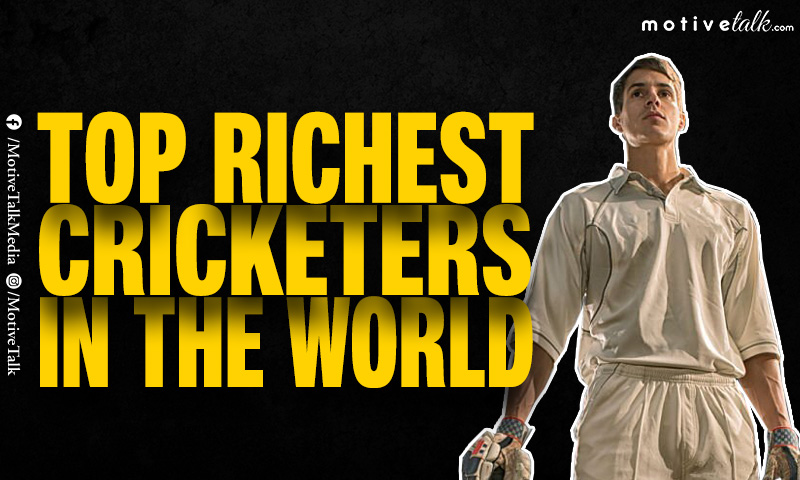 Are you wondering to know the Most Richest Cricketers All over the world? Then the answer is here!

Cricket is one of the most popular and prominent games in the world. Do you too wish to become a popular cricketer like your favorite player when you grow up? The rate of cricket lovers is increasing day by day making cricket a more popular and everyone’s favorite sport over time.

Are you too one of them? Cricket now holds a significantly influential role in the global games culture. That is why well-known cricketers enjoy a huge fan base which includes the youth, aged people, and even children.

9 Most Richest Cricketers All over the world

Cricket is a very famous sport, it will get 8 billion searches every month worldwide. Now you decide, how popular the sport it is. But shockingly Indian players are taken the first 3 places in wealth.  In this article, we have listed some of such richest cricketers in the world who earn millions by playing the sport.

When talking about the richest cricketers in the world, the first one is everyone’s favorite. Who could it be other than Sachin Tendulkar?

Tendulkar is not regarded as the God of cricket for no reason. He is one of the greatest batman histories has ever witnessed. Tendulkar is the brand ambassador of Pepsi, BMW, Phillips, Canon, Adidas, Britannia, and many more brands.

Even years after his retirement from the world of cricket he still remains a magnet for brands. When he was chosen as the brand ambassador of MRF tires in 2021, he became the first athlete to crack a deal of such a grand amount. As of 2022, his estimated net worth is $170 million.

Dhoni, the captain Cool, regarded as the most successful Indian captain rules the heart of all cricket fans due to his evergreen legacy. Apart from being the audience favorite for his calm and cool attitude, he ranks second in the list of richest cricketers in the world.

MSD in itself is a brand everyone wants to collaborate with. He has some of the biggest endorsements from Sony Bravia, Lays, TVS Motors, Snickers, Gulf Oil, GoDaddy, and many more. He has been the brand ambassador of Reebok for over 7-8 years.

Virat is called King Kohli by his fans. He is the former captain of the ongoing squad. He is regarded as one of the finest batsmen.  He is the caption of Royal Challengers Bangalore, a team in the Indian Premier League.

Not only he is famous for his skills on the field but also for his tremendously stylish looks and that is what makes him one of the most followed personalities on social media. Virat is the third richest cricketer in the world.

In the Indian Premier League, he serves as the head coach of Delhi capitals.  People consider him the most successful captain in international cricket history. He has out of 324 matches,  won 220 matches, and his winning ratio – is 67.91%.

He’s one of the most successful athletes and has endorsed brands like Adidas, Rexona, Valvoline, etc. among others.  As of 2022, his estimated net worth is $65 Million.

Maybe You Also Like: Top 11 Richest Footballers in the World (May 2022)

5. Brian Charles Lara (The Prince of Port of Spain)

Brian Lara is properly-known for his skipping skills in the West Indies cricket team. Tendulkar of the Indian team and Brian Lara of the West Indies dominated the world-class bowlers the span of the middle 90s to the early 2000s.

Lara holds multiple incredible records including the highest individual score in first-class cricket where he scored 501 against Durham for Warwickshire in the year 1994 at Edgbaston. He is endorsed as a brand ambassador of MRF Tyres.

Even after his retirement, his net worth is estimated to be $60 million.

Shane Keith Warne, the former one-day international captain, and Australian cricket player are largely considered to be the favorite of the audience all time spinners of test matches. He has many cricket-related titles like the world’s leading cricketer received in 1997, Wisden Leading Cricketer in the world in 2004, and Wisden Cricketers Almanack in 2005.

Shane has been the brand ambassador for many well-known brands all across the globe like Pepsi McDonald’s etc. Even though he retired many years ago, he is still regarded as one of the wealthiest and highest-paid cricketers of all time.

The ex-Indian captain and opener, and current commentator, Virender Sehwag Is known for his  Strong, dominant, and destructive batting style. He’s also participated in the games as a part-time right-arm-off spinner.

He has promoted multiple international brands like Reebok, Samsung, Boost, Adidas, etc. among others. He has also been the brand ambassador of Honda.  Back in April 2009, he became the first Indian to get the Wisden Leading Cricketer in the world.

The South African coach and former cricket player come on the right-handed batsman and fast-medium right-arm swing bowler, Jacques Henry Kallis isIs it is all rounded and one of the most favorites of all times.

Shane Watson is an all-format player who used to play for the Australian Cricket team in international cricket. He was also the occasional captain of the team. He also plays for CSK and has a record of scoring a match-winning 100 for the team in 2018.

He has played for multiple teams like Rajasthan Royals, and CSK in IPL. As of 2022, he is recently appointed as the assistant coach for Delhi capitals.

Shane Watson’s net worth is $30 million.

Did you spot your favorite cricket player on the list? Cricket is no more just a  mere sport and that is evident in the net worth of the cricketers. Cricket, in addition to earning them a reputation has also earned them a position among the richest athletes in the world.

Hi, I'm a Head Content writer at Motive Talk. I have been in this content industry for the past 2 years now. I am interested in various industries and I always keep myself updated with new trends and content. I can help you will all the SEO-friendly top-notch content you desired to have that will increase the engagement of your website.