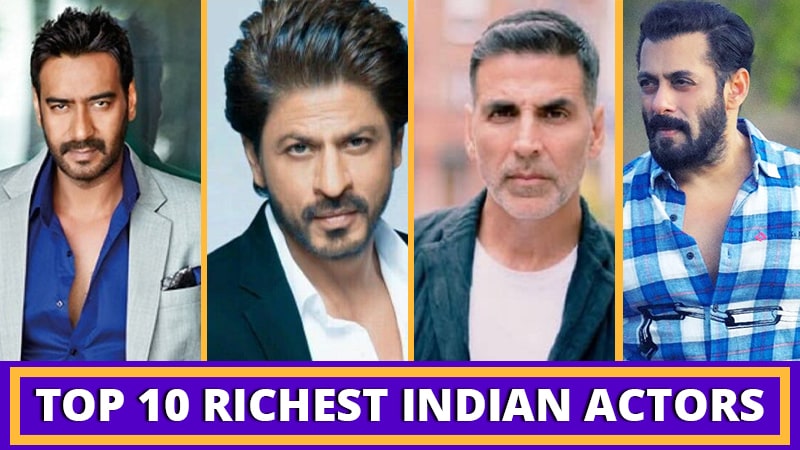 Do you love India and Bollywood? Then read this post and meet the Top 10 Richest Indian Actors and their famous quotes. Let’s start now;

Our Bollywood has given us so many successful and talented actors to date and some of them are the richest of all. If you are a Bollywood buff you must be wondering who can be the richest one in Bollywood. Don’t worry we’ll help you to uncover it today with this article.

Not everyone in this film industry is earning a lot with their acting skills only rather they are showing every card they have to be the highest earner. So here we are bringing to you the top 10 richest actors in India. Shahrukh Khan is taking 1st place in the Top 10 Richest Indian Actors. His famous quote is

“Art is more important than the artist – have no attachment to your own art. It is regressive, move on.”― Shahrukh Khan Quotes

He has put his great efforts to make his box office hit movies like “Darr”, “Dilwale Dulhania Le Jayenge”, “Mohobbatein”, “Dilwale” and many more.

He is charging an average amount of Rs. 25-30 crores per movie. He is also associated with big brands like Videocon and Emami for endorsements. “Bad luck either destroys you or makes you the man or woman you really are.” ― Amitabh Bachchan Quotes

Big B or The Angry Young Man is probably the only actor of his times who is still pulling a great movie every year. Even at the age of 75, he is driving his ends meal by acting and endorsing big brands. He has made appearances in more than a hundred and ninety movies of Bollywood.

He has portrayed several characters in his movies quite successfully. He is endorsing big brands like Dabur, Tata Sky, Dairy Milk, etc. He is also a TV host of the show Kaun Banega Crorepati. “Sometimes I feel I hope I am not taking advantage of my stardom.” — Salman Khan

Bollywood’s Bhaijan is the third richest actor in India who has made a strong presence in the entertainment industry be it acting or producing in the film. He charges an average amount of 60 crores per movie and he is also a TV host of renowned show Big Boss.

His property includes Galaxy apartments, two of his production house and some motorcycles, and a farm in Panvel. 14 of his films have helped him earn Rs. 100 crore at the Box Office. “I don’t believe in strategies. I love what I am doing, that’s the main thing.” ― Aamir Khan Quotes

Aamir Khan is widely known for him being picky about his movies that are why he has only one release over a year. He charges an average amount of Rs. 60 crores for every movie. Despite the fact that he doesn’t make so many films, he still comes under the list of top 10 richest actors in India.

He is associated with top brands like Vivo, Tata Sky, Titan, Toyota, and others. He also has a production house with the name Aamir Production House. “Controversies are a package deal in this industry. You just have to understand that and accept it.” — Akshay Kumar

Akshay Kumar is a renowned Bollywood actor who has managed to appear in the Forbes US lit of the World’s Highest-Paid Celebrities. Multiple of his releases have made several blockbusters with his superb acting.

He is supporting renowned brands like Pepsi, Manappuram Gold loans, Micromax mobile, Relaxo footwear, and others.

Akshay is a self-made star who has achieved so much stardom with his hard work and determination. He is one of those actors who make high grossing movies. “I think a lot of a man’s outlook in life – at least mine – is shaped by his relationship with his father.” — Saif Ali Khan

Next in the list of Top 10 Richest Indian Actors is Saif Ali Khan.

Saif Ali Khan, an Indian actor, and producer is in sixth place of the top 10 richest actors in India. Saif was born in a Nawaabs family as a son to Sharmila Tagore and Mansoor Ali Khan Pataudi.

He managed to be a prominent actor in the early 2000s his success has helped him to be o net worth $140 million. He is a brand ambassador of great brands like Lays, Ponds, Amul, and Asian Paints. He is the owner of 10 beautiful apartments in the posh locations of the world. “It is my duty to be better than my predecessor and to see that my successor is better than me.” — Kamal Haasan

He has started acting in films right from his childhood in the movie Kalathur Kannamma and he also won President’s Gold medal for that.

Hassan is one of the richest actors in Indian film with an eminent net worth of $100 million. He has achieved enormous success in Bollywood and is still making his contribution to filmmaking. “I am a shy person and I actually get embarrassed when people compliment me for my looks. But when I think about it later, I feel good.” — Dharmendra

Next in the list of Top 10 Richest Indian Actors is Dharmendra.

Dharmendra the well-known “He-Man” or “Action King” of Bollywood has been recognized by the Filmfare Lifetime Achievement award because of the contributions he has made in Bollywood. He is also a film producer and politician.

The popular actor has received the Padma Bhushan award and is the eighth richest actor in India. One of the most famous movies of him was Sholay and his career includes several other blockbuster movies. “I truly believe that God has given us few brain cells, and you have to direct them to the right things that make you happy.” — Ranbir Kapoor

Ranbir Kapoor, the highest-paid actor in Bollywood and has also got recognized by Forbes India’s Celebrity 100 list from the year 2012. He has achieved multiple awards for his great work and he has given several Box office hits including “Yeh Jawani Hai Deewani”, “Rockstar”, “Ajab Prem Ki Gajab Kahani” and “Barfi”.

Ranbir also co-owns the Mumbai City as a football team in Indian Super League. He is charging an amount of Rs. 15-20 crores per movie. “I don’t see the risk, I enjoy performing stunts, and I don’t get scared.” — Ajay Devgan

Next in the list of Top 10 Richest Indian Actors is Ajay Devgan.

Ajay is an Indian actor born to Veeru Devgan and is a famous film director, producer, and actor. He has performed roles in Bollywood films for more than a hundred and his Bollywood debut was with the movie “Phool Aur Kante”.

He has received several awards like Filmfare, National Film Awards, and several others. Ajay was the first Bollywood celebrity to have a private jet for traveling to shooting venues, for promotions, and for personal trips.

Most of the Bollywood actors who are highly paid are those who are highly successful and have performed mesmerizing roles in their hit movies. We have tried to pen down the list of 10 richest Indian actors by our researches that have a huge net worth. Let us know your thoughts.