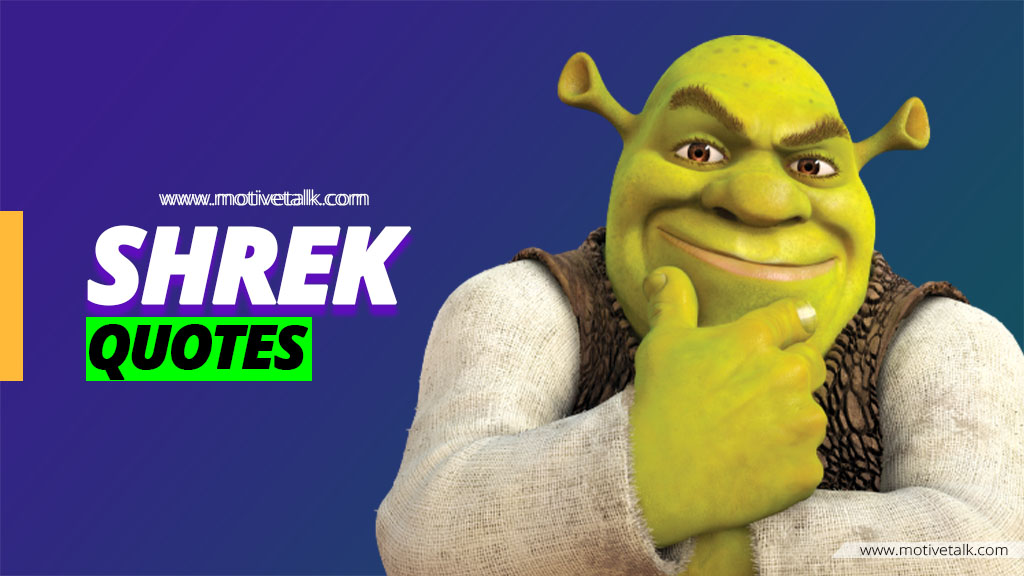 Are you a Shrek series fan like me? And searching for Shrek Quotes?

The Shrek series is the second animated highest-grossing movie. Here we will share the 21 Best Shrek Quotes of all time. Let’s shart now;

Ogres are a community that is supposed to be giant creatures who like to damage things and eat even humans. But our lovely Shrek is one silly, acute, and funny ogre who is a lovable husband and a family man.

Shrek quotes are inspired by his funny sides, difficulties he faced in his real life and love life, and many more. Life is never easy for Shrek because of his appearance. His giant and green appearance makes him despicable even by his in-laws.

It’s Shrek and his talking donkey which is the actual lifeline of this beautiful Shrek series along with his love Princess Fiona. He was supposed to rescue the lone and cursed princess who was locked away in a castle because of her curse.

His love was reversed by Fiona who also gave up her human form and choose to live with him in the Jungle and have a family with him.

The funny acts of the Donkey and Puss also add to the whole drama. In the journey with the princess, Donkey, and Puss he becomes the King of the Duloc.

Donkey is just a child who never understands a word that many quotes are there only to insult him. Shrek over the years has befriended most of the villagers he used to scare off. He is now a family man with his loving man with a darling wife and fuss creating triplets.

To add more fun in the series, Shrek is accompanied by two side-kick, Donkey and Puss who is the other lifeline of the series. His friends help him to solve all the problems and ups and downs he faces in his life.

Shrek’s life is full of adventures and fun and his quotes are funny, sarcastic, and inspiring all at the same time. He is a carefree man who never runs away from his duties and solves all the troubles with the help of his most trusted friends.

Shrek thinks himself to be an onion which the Donkey misinterprets to that the ogres smell bad but in reality, he means to say that Ogres make people cry like onions and so people should always remain away from them.

Shrek may seem to be dumb-minded but in reality, he is a smart Ogre who deserves to be the King. For instance, when they find a plate of Waffles in the middle of the Jungle he warns the donkey to not eat them as he gets suspicious that who would leave such a delicacy in a place like this.

Let’s have a look at the famous Shrek Quotes to enjoy and make your day. “But this isn’t right. You’re meant to charge in, sword drawn, banner flying-that’s what all the other knights did.” – Princess Fiona “Yeah, right before they burst into flame.” ― Shrek Quotes

“What are you doing? You know, you should sweep me off my feet out yonder window and down a rope onto your valiant steed.” ― Princess Fiona (The Shrek Series)

“Sure it’s big enough, but look at the location.” ― Shrek Quotes

“Wow, only a true friend would be that truly honest.” ― Quotes from Shrek Series “You might have seen a housefly, maybe even a superfly, but I bet you ain’t never seen a donkey fly.” ― Donkey (The Shrek Series)

“Five shillings for the possessed toy. Take it away.” ― Captain of Guards (The Shrek Series)

“You didn’t slay the dragon? – Princess Fiona “It is on my to do list. Now come on.” ― Quotes from Shrek Series “Yes, right, brimstone, don’t be talking about no brimstone. I know what I smelt and it wasn’t no brimstone and it didn’t come off no stone neither.” ― Donkey (The Shrek Series)

“Well it’s no wonder you don’t have any friends.” ― Shrek Quotes

“What kind of a knight are you? – Princess Fiona “One of a kind”.” ― Shrek Quotes About Life “Man, you gotta warn somebody before you crack one like that. My mouth was open and everything.” ― Donkey (The Shrek Series)

“Whoa. Look at that. Who’d wanna live in a place like that?” – Donkey “That would be my home.” ― Shrek Quotes

“The Princess will be up the stairs in the highest room in the tallest tower.” ― Shrek Quotes “No! I’m an ogre! You know, “Grab your torch and pitchforks!” Doesn’t that bother you?” ― Shrek Quotes

“Wow, that was really scary and if you don’t mind me saying, if that don’t work, your breath will certainly get the job done, ’cause you definitely need some Tic Tacs or something ’cause your breath stinks.” ― Donkey (The Shrek Series)

“All right, you’re going the right way for a smack bottom.” ― Shrek Quotes

“Donkey, if that was me, you’d be dead. That’s brimstone… we must be getting close.” ― Shrek Quotes

“That must be Lord Farquaad’s castle. Do you think he’s maybe compensating for something?” ― Shrek Quotes “Well my stomach aches and my palms just got sweaty, must be a high school.”
― Shrek Quotes

“After a while you learn to ignore the names people call you and just trust who you are.”
― Shrek

Last 6 Shrek Quotes Are Below

“Don’t you want to tell me about your trip? How about a game of Parcheesi?”
― Donkey [ Shrek Series ]

“What are you doing in my swamp?”
― Shrek Quotes

“We can stay up late swapping manly stories, and in the morning, I’m making waffles!”
― Donkey [ Shrek Series ]

“It’s not supposed to be an ogre!”
― Princess Fiona [ Shrek Series ]

We hope that these beautiful quotes have put a smile on your face and don’t forget to share these quotes with your friends and family.

The best and the most inspiring thing about Shrek his that you might not like people at first sight. But when start knowing them you eventually create a good bond with them over time.