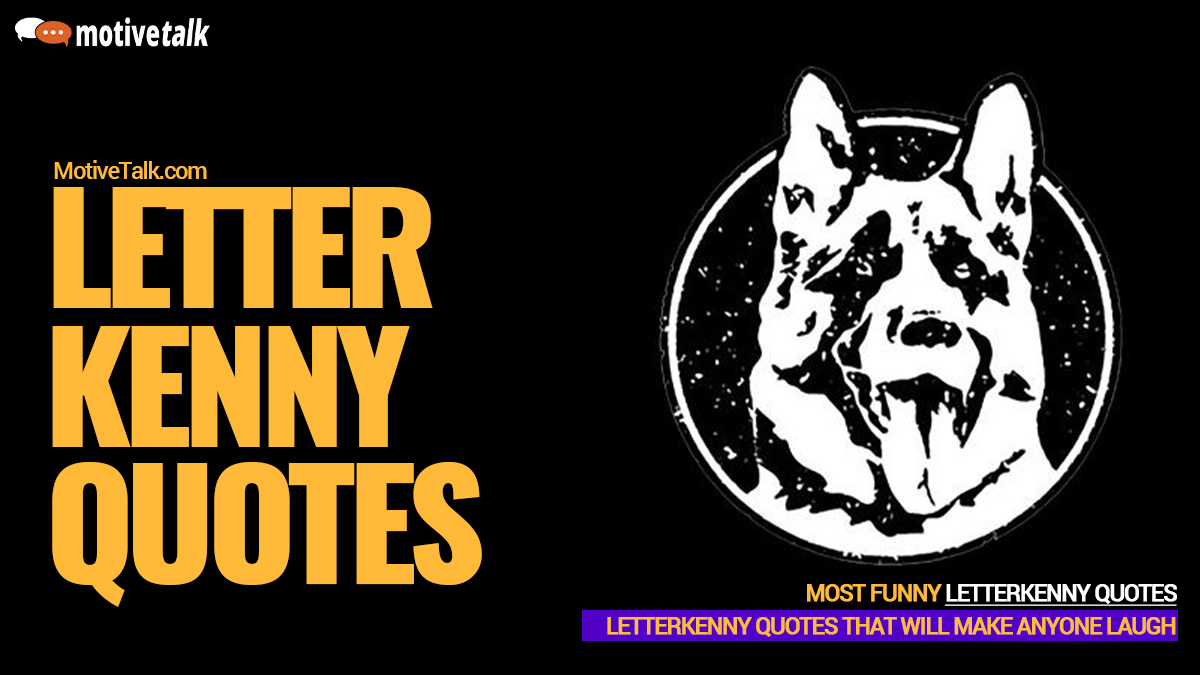 Are you a fan of Letterkenny? Here we will discuss the Letterkenny Quotes, the joke that will make anyone laugh. Now start with the short intro and the quotes will be on the later part.

Imagine that you have moved to Canada and you have ended living in a rural area. Even the normal day to day life can become hilarious.

The comedy series ‘Letterkenny’ revolves around 2 siblings Wayne and Kate. To earn their living both the siblings run a farm and along with their friends to create a series of hilarious situations.

The series paints a really funny life in the countryside. To understand these quotes you have to add some new words in your vocab. Don’t worry we are fully equipped to give you the exact meaning of every word.

So, let’s give you an idea of how different words mean as the ‘Chel’ in the series means hockey, ‘Donny Brook‘ means a fight and many more. The series is a way hilarious then you think as the words can mean entirely different from your definition and the definition used by the writer.

The series is full of many hilarious punch lines. In case you have never heard or seen the series, these quotes will definitely encourage you to watch the series.

Wayne and his friends live in their own small wonderful world. Their quotes are funny in their way and will leave stitches thanks to the hilarious inappropriate sense of humor.

The Letterkenny quotes will help you to learn new slang and bring a smile on your face.

‘Letterkenny’ is one of the awesome shows given by the great CANADA. The show over the past seasons has never disappointed anyone and with every season it keeps on improving.

With every new season, the writer adds some new hilarious slangs which can be added to your vocab easily. The smalltown folks of the show have found their ways to keep themselves entertained in their way. Their birthday bashes can be hilarious and the hockey team also has some great punches to throw.

Being a country bumpkin I could easily relate to the show and the situations which were faced by the actors. The writer has very beautifully and ironically shown how small town simple-minded people solve their problems.

With every new season, many new characters are introduced which adds up to the whole chaos. So, let’s go through these quotes and add up some funny slangs to our list. You never know they might come handy in some way during a fight. The Letterkenny quotes will definitely uplift your spirit. “It’s a hard life picking stones and pulin’ teats, but as sure as God’s got sandals, it beats fightin’ dudes with treasure trails.” ― Wayne

“It’s like algebra, why you gotta put numbers and letters together? Why can’t you just go fuck yourself?” ― Wayne

“You stopped toe curlin’ in the hot tub ‘cause you heard sperms stay alive in there and you’ve seen Teenage Mutant Ninja Turtles enough times to know how that story ends.” ― Quotes of Letterkenny

“You’d best be preparin for a Donny Brook if you think I’m going to that super soft birthday party of yours.” ― Letterkenny Quotes “You knew your pal had come into money when he started throwing out perfectly good pistachios like he was above cracking ‘em open with a box cutter like the rest of us.” ― Quotes of Letterkenny

“You ever hoover schneef off a sleeping cow’s spine? I’ve hoovered schneef off an awake cow’s teet.” ― Letterkenny Quotes

“You’re pretty good at wrestlin’ there, Katy, and that’s what I appreciates about you.” ― Letterkenny Quotes “That was well brought up. Too bad you weren’t.” ― Letterkenny Quotes

“We only got one shot at this. One chance. One win. You know? Vomit on your mom’s spaghetti, or whatever that talking singer says.” ― Letterkenny Quotes

“Oh I’m stomping the brakes, put that idea right through the fucking windshield.” ― Quotes of Letterkenny

“What’s up with your body hair, you big shoots? You look like a 12-year-old Dutch girl.” ― Letterkenny Quotes “I see the muscle shirt came today. Muscles coming tomorrow? Did ya get a tracking number? Oh I hope he got a tracking number. That package is going to be smaller than the one you’re sportin’ now.” ― Quotes of Letterkenny

“Buddy you couldn’t wheel a fuckin’ tire down a hill.” ― Wayne

“Call me a cake, ‘cause I’ll go straight to your ass, cowboy!” ― Quotes of Letterkenny

“Tim’s, McDonald’s, and the beer store are all closed on Christmas Day. And that’s your whole world right there.” ― Letterkenny Quotes “I wish you weren’t so fucking awkward, bud.” ― Letterkenny Quotes

“Seeing as this is most certainly a one-off event and not a tradition that also falls on some made-up holiday that I couldn’t give a cats queef about, I’m out. There’s happiness calling my name from the bottom of a bottle of puppers.” ― Quotes of Letterkenny

“You seen a ‘coon havin’ sex with a barn cat on top of your truck? Fuck what’s the nature of that David Suzuki.” ― Quotes of Letterkenny So if you have read these hilarious quotes or binge-watch the show, I am pretty sure your vocab will be added up with some new slangs.

“Pitter-patter” or “Donny Brook” will be your new slang for calling a fight.

The quotes are so hilarious that sometimes you laugh for not getting what the other is really trying to say.

The new season is packed with some action and so make sure to add the season to your watchlist.