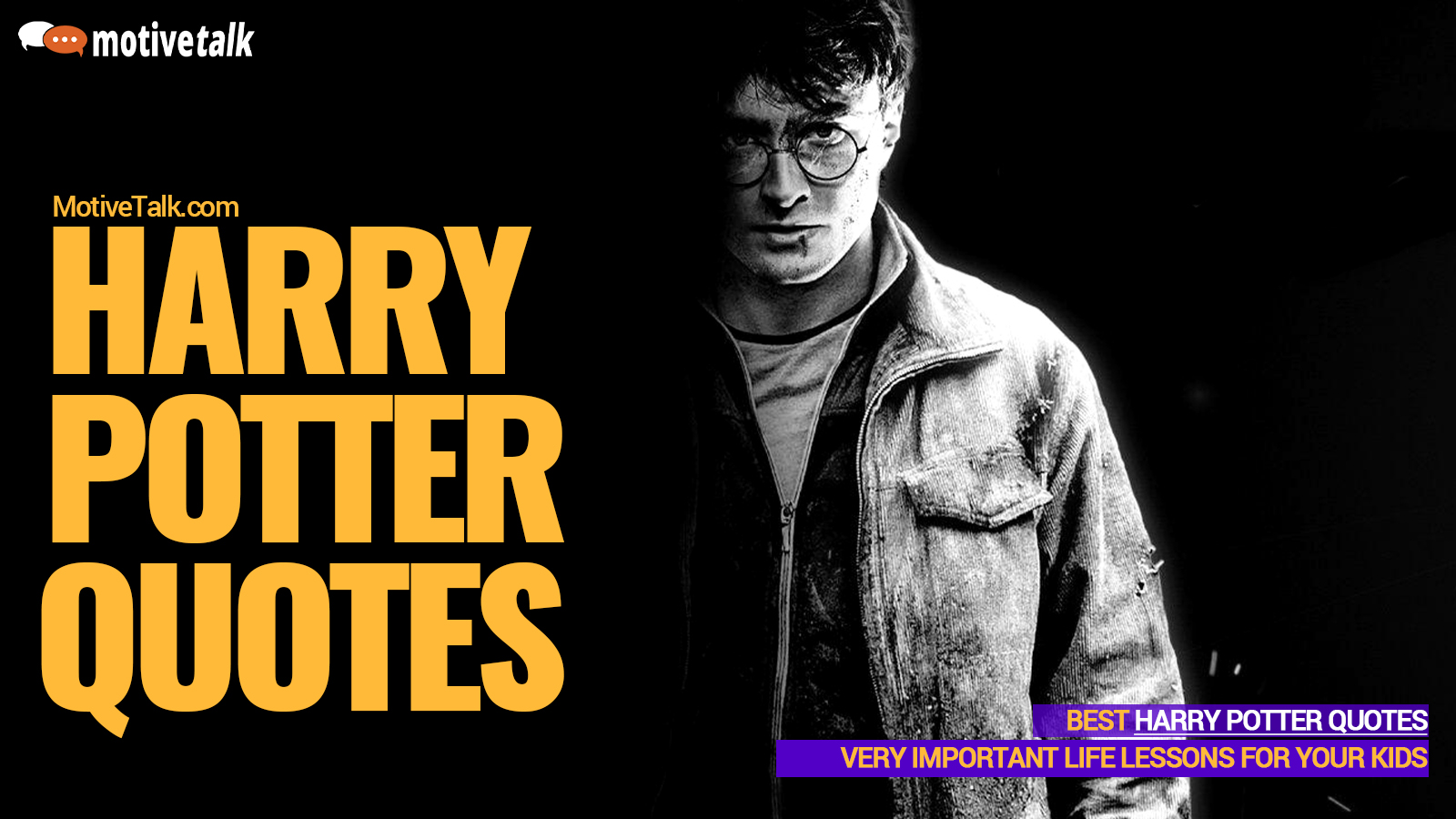 Harry Potter series is the most famous series worldwide. The best Harry Potter Quotes are given good and very important life lessons for your kids.

The book shows how the writer J.K Rowling beautifully portrayed all the characters and the magical world. Some people still wait for the train to Hogwart’s turn into reality so that we can also visit the magical world created by the writer.

Though we are living in the Muggle world the problems faced by him in the Hogwart’s are faced by us here too. His bravery and friendship have set new roles for others. They guide us on how to tackle all the problems we are facing here.

Harry Potter has shown us the value of friendship and what role friends play in our life. It’s really hard to find true friends in life who stand by our side in every situation. Hermione Granger and Ronald Bilius Weasley risked even their own lives to stand and fight beside their best friend’s side.

Apart from many other characters in the movie inspired us with their words to achieve big in their life. Hagrid with his quotes has inspired everyone to accept us the way we are so that others also love and accept us.

Harry Potter has many quotes that have shown us that we should always take the right path. In the last part when Harry was confused about killing Voldemort that inspiring words said by Dumbledore that if one person’s death can save countless lives than his death by any means is justified.

The story has inspired us all that all the ups and downs in life ultimately lead us towards a good ending. Always work hard and learn from your mistakes so that you can taste the sweet pie at the end.

We should never reveal our weakness to anyone nor should we allow these weaknesses to build inside us. These weaknesses are tools which can be used others to doom us. Our weakness makes our vision blur and our decision making power poor.

Ultimately Dumbledore’s words to Harry that one’s intentions are the base of his character. So, he should not fear his powers, which are equivalent to Voldemort as his evil intentions turned him into a villain. “And Percy was shaking his brother, and Ron was kneeling beside them, and Fred’s eyes stared without seeing, the ghost of his last laugh still etched upon his face.” ― Harry Potter Quotes

“Just because you have the emotional range of a teaspoon doesn’t mean we all have.” ― Hermione Granger

“I hope you’re pleased with yourselves. We could all have been killed, or worse, expelled. Now if you don’t mind, I’m going to bed.” ― Harry Potter Quotes “The truth. It is a beautiful and terrible thing, and should therefore be treated with great caution.” ― Albus Dumbledore

“I’ll be in my bedroom, making no noise and pretending I’m not there.” ―Best Harry Potter Quotes

“Just because it’s taken you three years to notice, Ron, doesn’t mean no one else has spotted I’m a girl.” ― Best Harry Potter Quotes “We are only as strong as we are united, as weak as we are divided.” ― Albus Dumbledore

“There are some things you can’t share without ending up liking each other, and knocking out a twelve-foot mountain troll is one of them.” ―Best Harry Potter Quotes

“Fawkes is a phoenix, Harry. Phoenixes burst into flame when it is time for them to die and are reborn from the ashes.” ― Albus Dumbledore “You think the dead we loved truly ever leave us? You think that we don’t recall them more clearly in times of great trouble?” ― Albus Dumbledore

“I want to commit the murder I was imprisoned for.” ― Best Harry Potter Quotes

“We’ve all got both light and dark inside us. What matters is the part we choose to act on. That’s who we really are.” ― Harry Potter Quotes You may also read: ― Alice In Wonderland Quotes

“Dumbledore says people find it far easier to forgive others for being wrong than being right.” ― Hermione Granger

“Youth can not know how age thinks and feels. But old men are guilty if they forget what it was to be young.” ―Best Harry Potter Quotes

“Just because it’s taken you three years to notice, Ron, doesn’t mean no one else has spotted I’m a girl.” ― Best Harry Potter Quotes “Honestly, if you were any slower, you’d be going backward.” ―Inspiring Quotes Of Harry Potter

“It is the unknown we fear when we look upon death and darkness, nothing more.” ―Inspiring Quotes Of Harry Potter “Things we lose have a way of coming back to us in the end, if not always in the way we expect.” ― Luna Lovegood

“Fame is a fickle friend, Harry. Celebrity is as celebrity does. Remember that.” ―Best Harry Potter Quotes

“Your devotion is nothing more than cowardice. You would not be here if you had anywhere else to go.” ― Lord Voldemort “To the well-organized mind, death is but the next great adventure.” ― Harry Potter Quotes by Albus Dumbledore

“When in doubt, go to the library.” ― Ron Weasley

“I solemnly swear I am up to no good.” ― Best Harry Potter Quotes

“Are you insane? Of course I want to leave the Dursleys! Have you got a house? When can I move in?” ― Harry Potter Quotes

“Ah, music. A magic beyond all we do here!” ― Best Harry Potter Quotes by Albus Dumbledore

We hope that the wonderful quotes helped you re-live your childhood. These quotes inspire you to believe in the magic and try hard in every situation so that you can pass every bad time of life. Life is full of thorns, but our friends are a source of pleasure to pass them so that we can together enjoy the sweet at the end.

Please let me know in the comments section, what is your favorite quotes?

Harvey Specter Quotes To Inspire Success in Your Life and Business