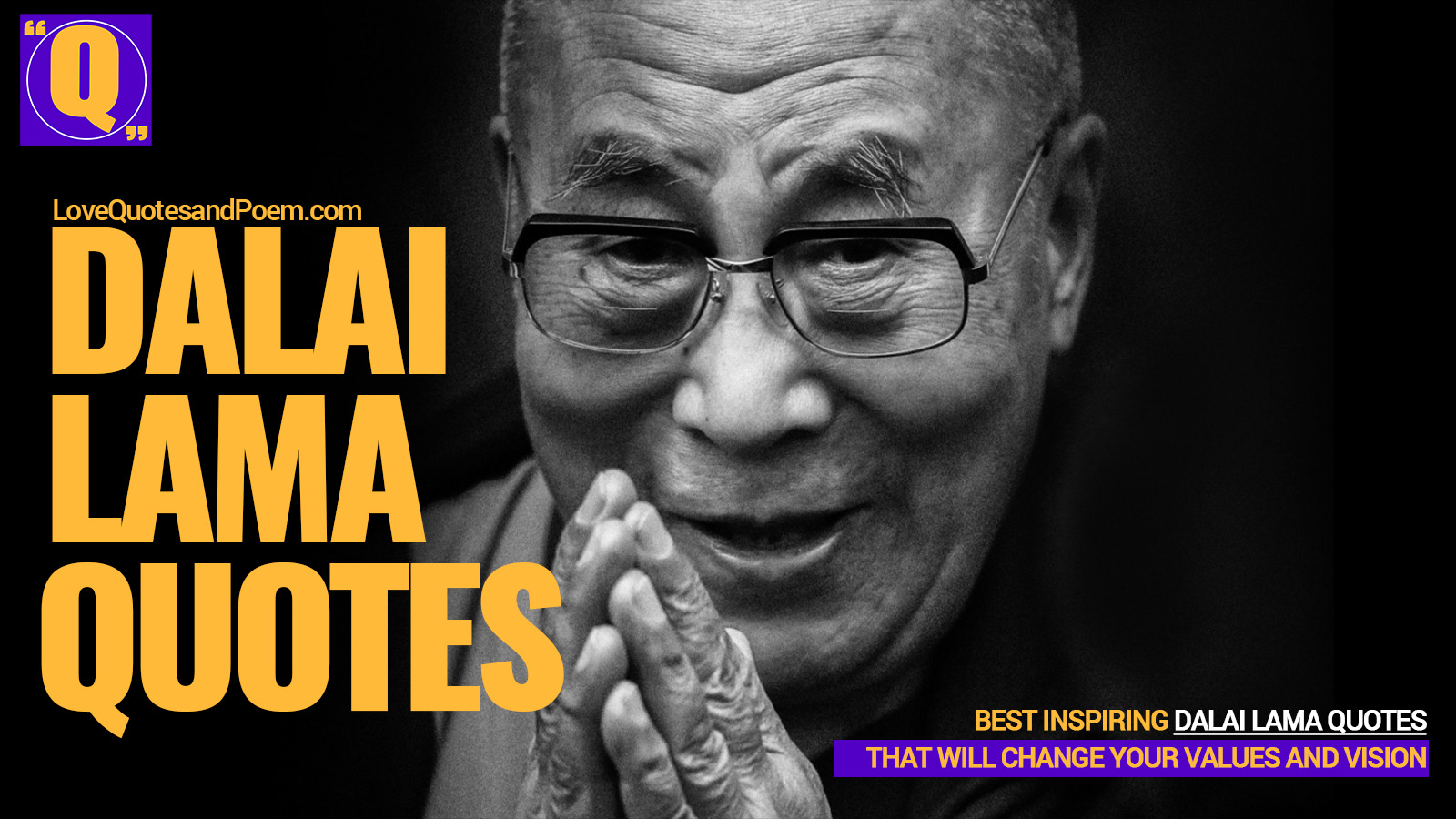 In this article, We are discussing the 14th Dalai Lama of Tibet and his values, vision, and Dalai Lama Quotes.

At the tender age of two years, he was accepted as the reincarnation of the previous Dalai Lama, Thubten Gyatso.

A simple Buddhist monk and a spiritual leader are considered as a manifestation of Bodhisattva of benevolence and a benefactor saint of Tibet.

They are the reincarnation of the previous Dalai Lama and by a wish attain Buddhahood to serve humanity. His Holiness began his ascetic education at the age of six. Based on the Nalanda tradition of education his curriculum comprised of five major and five minor subjects. His education mainly focused on Buddhist philosophy and other subjects like medicine, poetry, arts, astrology, etc.

Jokhang Temple in Lasha from the summer of 1958 to February 1959 his holiness at the age of 23 gave his final examination. He passed with a Geshe Lharampa degree, the highest philosophy degree in Buddhism philosophy that was his main subject. He took his full power over Tibet in the year 1950 after China’s invasion and tried to settle things peacefully.

In, 1959 his holiness was forced to escape into exile after Chinese troops uprising in Lhasa and has been living in Dharamshala, India after that.

After his appeal, the United Nations General Assembly adopted three resolutions on Tibet in 1951,1961 and 1965.

To solve the worsening situation in Tibet His Holiness proposed a Five-Point Peace Plan in Washington, DC on 21, September 1987. He proposed to convert Tibet into a peace zone and save its natural environment from the Chinese Nuclear test and nuclear waste dump. He emphasized respecting Tibetan people’s Fundamental rights by the Chinese government.

For his non-violent struggle towards the liberation of Tibet, His Holiness was awarded the Nobel Peace Prize in the year 1989. All around the world His Holiness is considered a man of peace. He has been awarded many doctorates and prices and has visited near about 67 countries during his lifetime.

On 29 May 2011, the democratically elected leader formally got the power transferred from His Holiness through a signed document. He concluded the 368-year-old tradition in which the Dalai Lama was the temporal as well as the spiritual head of Tibet.

Dalai Lama has declared that Gaden Phodrang Trust under him will be fully responsible for recognizing the 15 Dalai Lama after his death. In doing so Oath-bound Dharma protector and heads of Tibetan Buddhist Traditions opinions will also be taken into consideration. He said apart from reincarnation no other method should be taken into consideration excluding all political connections to save the tradition.

“Someone else’s action should not determine your response.” ― Dalai Lama 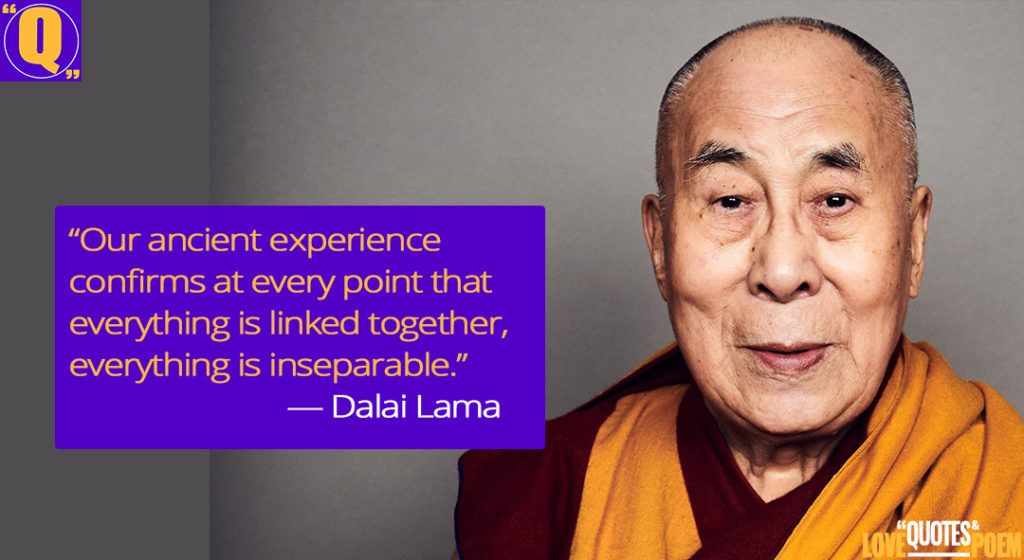 “Happiness doesn’t always come from a pursuit. Sometimes it comes when we least expect it.” ― Dalai Lama

“Anger or hatred is like a fisherman’s hook. It is very important for us to ensure that we are not caught by it.” ― Dalai Lama Quotes

“Irrespective of whether we are believers or agnostics, whether we believe in God or karma, moral ethics is a code which everyone is able to pursue.” ― Dalai Lama 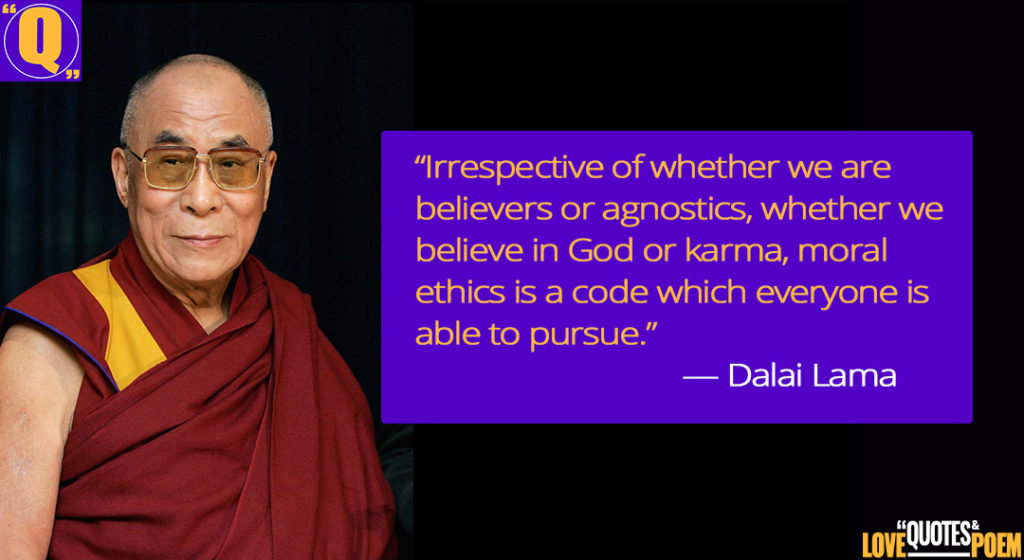 “I defeat my enemies when I make them my friends.” ― Dalai Lama Quotes

“When we meet real tragedy in life, we can react in two ways–either by losing hope and falling into self-destructive habits, or by using the challenge to find our inner strength.” ― Dalai Lama

“A good friend who points out mistakes and imperfections and rebukes evil is to be respected as if he reveals the secret of some hidden treasure.” ― Dalai Lama 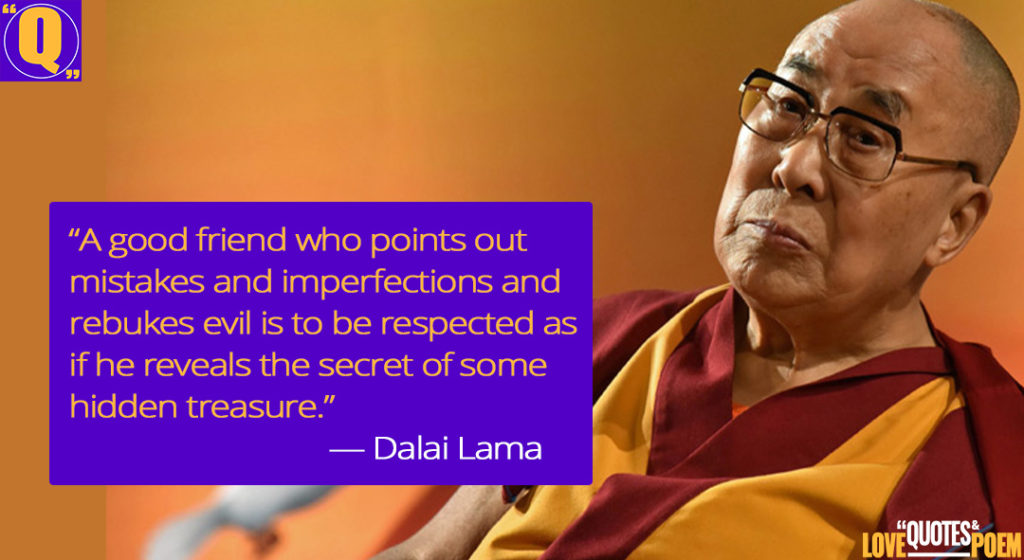 “Because we all share this planet earth, we have to learn to live in harmony and peace with each other and with nature. This is not just a dream, but a necessity.” ― Dalai Lama

“Compassion is the radicalism of our time.” ― Dalai Lama

“The topic of compassion is not at all religious business; it is important to know it is human business, it is a question of human survival.” ― Dalai Lama Quotes “Through violence, you may ‘solve’ one problem, but you sow the seeds for another.” ― Dalai Lama Quotes

“Inner peace is the key: if you have inner peace, the external problems do not affect your deep sense of peace and tranquility. without this inner peace, no matter how comfortable your life is material, you may still be worried, disturbed, or unhappy because of circumstances.” ― Dalai Lama

“It is under the greatest adversity that there exists the greatest potential for doing good, both for oneself and others.” ― Dalai Lama “Love and Compassion are the true religions to me. But to develop this, we do not need to believe in any religion.” ― Dalai Lama

“Although you may not always be able to avoid difficult situations,you can modify the extent to which you can suffer by how you choose to respond to the situation.” ― Dalai Lama “The whole purpose of religion is to facilitate love and compassion, patience, tolerance, humility, and forgiveness.” ― Dalai Lama

“The ultimate source of happiness is not money and power, but warm-heartedness.” ― Dalai Lama

“This is my simple religion. No need for temples. No need for complicated philosophy. Your own mind, your own heart is the temple. Your philosophy is simple kindness.” ― Dalai Lama Quotes “Our prime purpose in this life is to help others. And if you can’t help them, at least don’t hurt them.”
― Dalai Lama Quotes

“Happiness is not something ready made. It comes from your own actions.”
― Dalai Lama

“Old friends pass away, new friends appear. It is just like the days. An old day passes, a new day arrives. The important thing is to make it meaningful: a meaningful friend or a meaningful day.”
― Dalai Lama Quotes

“The purpose of our lives is to be happy.”
― Top Dalai Lama Quotes

During his lifetime Dalai Lama used non-aggressive methods for the liberation of Tibet.

He has written many books and his quotes reflect his peaceful attitude to guide humanity to live peacefully.

His continuous non-violent action has shown that wars can also be won without lifting any weapon.

His teachings encourage us to live with peace and harmony. I hope Dalai Lama Quotes will motivate you enough.

What are your favorite Dalai Lama Quotes? Please comment below.

Inspirational Monday Quotes to Motive Start of the Week