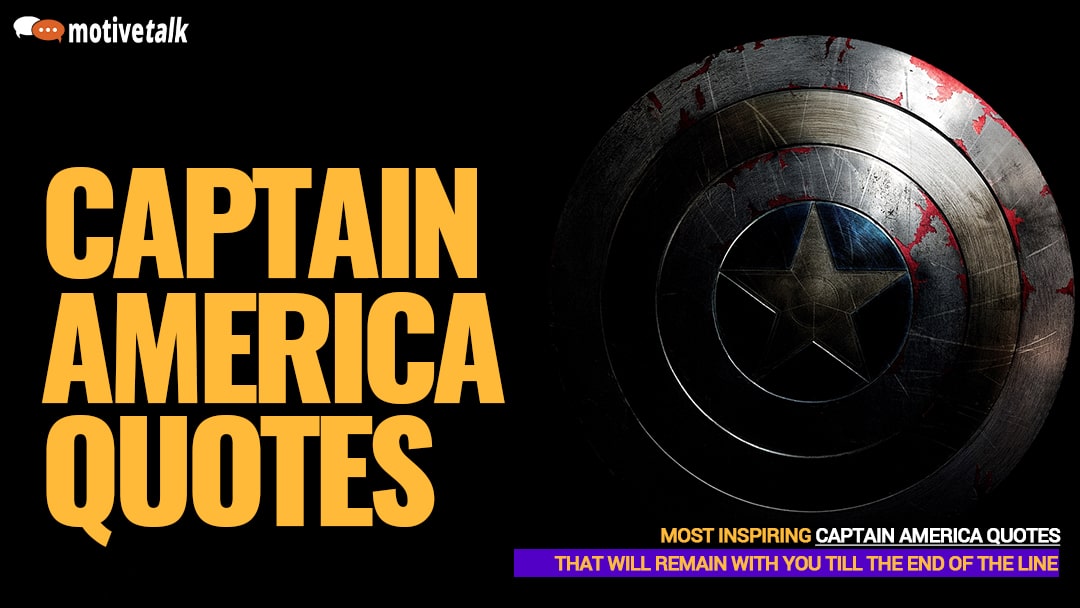 Captain America is the first avenger of the Marvel Comics. He is the most loved superhero, who never deserts his friends whatever the situation is. Are you guys excited to read Captain America Quotes?

4th July is the birthday of Steve Rogers and it is the day when America got its independence. Marvel Comics created the character Captain America in 1941, but in the past decade, the popularity of the character has been rocket high.

The on-screen character of Captain America is portrayed by Chris Evans and he is now one of the most recognized superheroes all around the world.

He was first portrayed as a very soldier during the first war where he was not accepted in the army because of his weak physique. Who knew that this small, timid, and weak Steve Rogers, who was bullied in the alley by some guns will one day become the world’s most loved superhero.

Even before he became a strong Captain America, Steve Rogers had the spirit of a hero, he faced the bullies with full spirit. The goodness inside him has been an inspiration to all.

Erskine believed that his medicine will amplify the goodness inside the weak Steve Rogers and he will become Nation’s true hero. Steve Rogers with his acts all around these years, has proved that he deserves to be the chief of the Avengers.

He always stood by his friend’s side and his team. He gives 100% of his team and expects the same from his team. His words inspire his team during tough times. After the death of many civilians during the Age of Ultron and Civil War most of the avengers lost their morale.

The Avengers team members found themselves guilty for the death of so many civilians, but Captain America’s words boosted their morale that it is not possible to save every life. Even victory has its price and sometimes it is the lives of innocent people.

Steve Rogers may never be fit into society, he may never be able to fit inside the S.H.I.E.L.D properly but still, he is a true people’s man, A Nation’s first true hero. His words and fighting spirit even against the aliens and many more have inspired many people all around the world.

His quotes will inspire you to face tough situations and bullying and keep up your spirits. Let’s have a look at some of his famous quotes (Captain America Quotes). “I’ve been asleep for 70 years. I think I’ve had enough rest.” ― Captain America

“The price of freedom is high. It always has been. And it’s a price I’m willing to pay. And if I’m the only one, then so be it. But I’m willing to bet I’m not.” ―Steve Rogers

“If I see a situation pointed south, I can’t ignore it. Sometimes I wish I could.” ― Captain America Quotes “If they’re shooting at you, they’re bad.” ― Captain America Quotes

“You know for the longest time I dreamed about coming overseas and being on the front lines. Serving my country. I finally get everything I wanted, and I’m wearing tights.” ― Captain America

“You start running, they will never let you stop. You stand up, push back. Can’t say no forever, right?” ― Captain America Quotes “You just can’t stop yourself from lying, can you?” ― Captain America Quotes

“Be careful. Look out for each other. This is the fight of our lives. And we’re going to win. Whatever it takes. Good luck.” ―Steve Rogers

“We all need family. The Avengers are yours, maybe more so than mine.” ―  Captain America Quotes “You know, you may not be a threat, but you better stop pretending to be a hero.” ―  Captain America Quotes

“This job, we try to save as many people as we can. Sometimes that doesn’t mean everybody. But if we can’t find a way to live with that, next time, maybe nobody gets saved.” ― Captain America

“I know this neighborhood. I got beat up in that alley. And that parking lot. And behind that diner.” ―  Captain America Quotes “I know we’re not perfect, but the safest hands are still our own.” ― Captain America Quotes

“That’s great. You did the hardest part. You took the jump, you didn’t know where you were gonna come down. And that’s it. That’s those little brave baby steps you gotta take. To try and become whole again.” ―Steve Rogers

“I don’t want to kill anyone. I don’t like bullies, I don’t care where they are from.” ― Captain America Quotes “There are men laying down their lives. I got no right to do any less than them. That’s what you don’t understand. This isn’t about me.” ― Captain America

“There’s a chance you might be in the wrong business.” ―  Captain America Quotes “There’s only one God, ma’am, and I’m pretty sure he doesn’t dress like that.” ― Captain America Quotes

“Well, things aren’t so bad. Food’s a lot better; we used to boil everything. No polio is good. Internet, so helpful. I’ve been reading that a lot trying to catch up.” ―Steve Rogers

“When I went under, the world was at war. I wake up, they say we won. They didn’t say what we lost.” ― Captain America Quotes He is always willing to listen to other people’s opinions. Though when he first met Tony Stark he treated him as a selfish and self-centered man, but later he took his advice and retired from the post of Captain America.

He is a true hero whose words will always inspire people around the world.