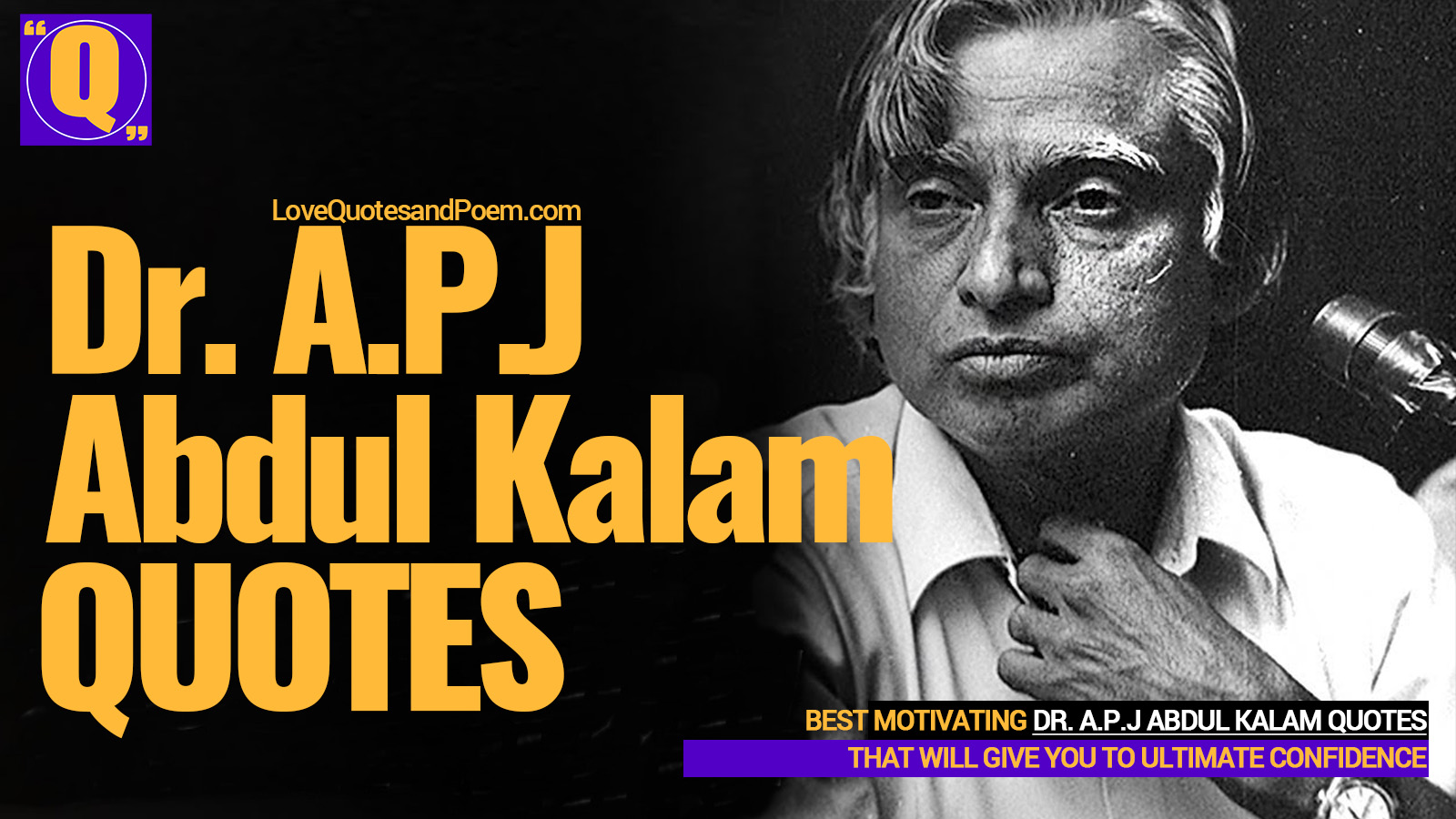 Dr. APJ Abdul Kalam India’s 11th President of India from 2002 to 2007. Also known as the Missile Man. Here you will get 20+ APJ Abdul Kalam Quotes, which will surely motivate you.

Dr. APJ Abdul Kalam Birth; On 15 October 1931, in the small village Dhanushkodi, Tamil Nadu 11 president of India Dr.APJ Abdul Kalam was born. His father Jainulabdeen was a fisherman and his mother Ashiamma was a housewife. He was the youngest child in the family which comprised of five siblings. His family’s financial condition was not good and he spent most of his childhood days in poverty.

In his school days, Kalam was grouped as a bright and hardworking student due to his keen desire to gain knowledge. After completing his schooling from Saint Joseph College he, later on, graduated in Physics from the University of Madras in 1954.

He found his passion in Aerospace Engineering and moved to Madras Institute of Technology to pursue his studies in this field. After completing his studies he joined the Defense Research and National Organisation(DRDO) and later on moved to ISRO.

During his tenure in ISRO, he worked as the project director of SLV-III, India’s first satellite launch vehicle. In,1982 he moved back to DRDO and earned the name of “Missile Man” for designing successful missiles under the mission “AGNI” and “Prithvi“. From the period of 1992 to 1999 he served DRDO as Chief Scientist Adviser & Secretary and under his supervision Pokhran-II nuclear tests were successfully conducted.

Successful tests created many concerns in the International community but established Kalam as a National Hero. In, 1998 he launched the mission Technology Vision 2020, which emphasized growing technology as a base of the economy and using it in other fields like agriculture, health care, and education.

In 2002, NDA proposed Kalam’s name for the presidency even though he was a Muslim and due to his stature and friendly got support for the presidency. He served as the Indian president’s office from 2002 to 2007 and was succeeded by Pratibha Patil.

In the year 1990, he was awarded the Padma Vibushan award and Bharat Ratan in 1997 the country’s highest award for his contribution to the technological development of the nation. His autobiography “Wings Of Fire” shows that despite all the difficulties in his life he patiently fought and won all the battles.

His death on 27, July 2015 in Shillong put the country in National grief for losing a true hero. The government of India declared a 7-Day state Mourning to pay tribute to the legend. He lived a simple lifestyle and after his death, his belongings were passed to his elder brother who survived him.

“Success is when your Signature changes to Autograph.” ― APJ Abdul Kalam

“In this world, fear has no place. Only strength respects strength.” ― APJ Abdul Kalam

“Look at the sky. We are not alone. The whole universe is friendly to us and conspires only to give the best to those who dream and work.” ― APJ Abdul Kalam Quotes “You have to dream before the dream comes true.” ― APJ Abdul Kalam

“Be active! Take on responsibility! Work for the things you believe in. If you do not, you are surrendering your fate to others.” ― APJ Abdul Kalam “If you fail, never give up because FAIL means “First Attempt In Learning.” ― APJ Abdul Kalam

“To succeed in your mission, you must have a single-minded devotion to your goal.” ― APJ Abdul Kalam Quotes “Science is a beautiful gift to humanity; we should not distort it.” ― APJ Abdul Kalam

“It means, people who are in high and responsible positions if they go against righteousness, righteousness itself will get transformed into a destroyer.” ― APJ Abdul Kalam Quotes

“Thinking should become your capital asset, no matter whatever ups and downs you come across in your life.” ― APJ Abdul Kalam “The bird is powered by its own life and by its motivation.” ― APJ Abdul Kalam

“Educationists should build the capacities of the spirit of inquiry, creativity, entrepreneurial and moral leadership among students and become their role model.” ― APJ Abdul Kalam “It Is Very Easy To Defeat Someone, But It Is Very Hard To Win Someone.” ― APJ Abdul Kalam Quotes

“Thinking is the capital, an enterprise is a way, and hard work is the solution.” ― APJ Abdul Kalam

“Unless India Stands Up to the World, No one Will Respect Us. In this World, Fear has no place. Only Strength Respects Strength.” ― APJ Abdul Kalam “DREAM is not what you see in sleep, Dream is the thing which Doesn’t Let You Sleep.” ― APJ Abdul Kalam

“To become ‘unique,’ the challenge is to fight the hardest battle which anyone can imagine until you reach your destination.” ― APJ Abdul Kalam “My view is that at a younger age your optimism is more and you have more imagination etc. You have less bias.” ― APJ Abdul Kalam

“Confidence and hard-work is the best medicine to kill the disease called failure. it will make you a successful person.” ― APJ Abdul Kalam

“I am not a Handsome guy, but I can give my hand-to-some one who needs help. beauty is in the heart not in the face.” ― APJ Abdul Kalam Quotes “Missile Man” of India was a true son of his Nation and served his motherland until his last breath. His gentleman nature and great personality earned him the status of a true global leader. His quotes are a source of inspiration for everyone to work hard to achieve their dreams.

He was a devoted leader who worked all his life in the social, technological, and economic growth of India. I hope these APJ Abdul Kalam Quotes will motivate you for sure.

21 Mukesh Ambani Quotes – That Will Boost Your Confidence