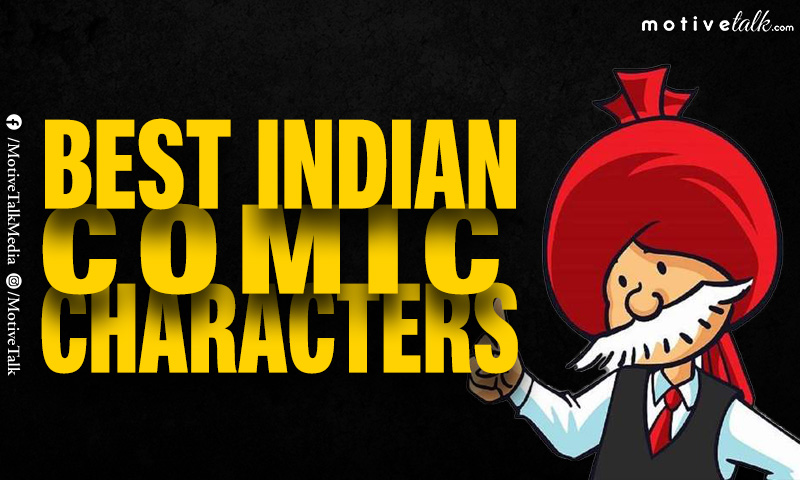 Comics have played an important role in our life. It makes our childhood memorable. Usually parents’ taught us moral things through comics. It also helps us to develop reading skills. Comics have good and interesting stories so we never get bored of them.

Some Indian comic characters leave their impression in our minds lifelong. Some stories are based on comedy versions and some are on real-life lessons. Let’s rewind the time to talk about some fabulous comics from India.

Chacha Chaudhary is a very famous series. It is created in 1971 and written by Pran Kumar Sharma. Chacha Chaudhary is an old man who is very intelligent. He wears a red turban on his head.  In this comic his wife Bini, his dog called the rocket, and the alien from Jupiter Sabu are the main characters.

He solved any problem with his common sense and also adds some humor to that. He is different from other superheroes he always proves that we can win by our intelligent body is not important every time.

Most of the stories are based on corrupt officers, thieves, roadside goons, and local thugs. He also teaches these villains moral lessons also. Sometimes Sabu and rocket come in a rescue operation at that time lots of humor generate and it also brings excitement and thrills. Even Sabu can change his body size from story to story.

Tenali Rama is one of the poets of Krishnadevaraya’s darbar. He is very smart and witty. A different director also made this character movie and series. Currently, Tenali Rama’s show is presented on sub TV. He is a Telugu poet from Andhra Pradesh.

He is an advisor in the king’s courtroom. Many times Tenali rescues the king from problems and proves his wittiness. Children have fun learning smart tricks also.

Champak was published in 1969 by Vishwanath. It is published in 8 different languages. Champak is a very popular comic among children. The theme of champak is very different. It is not based on any particular characters. Many puzzles and brainstorming activities are included in champak.

Panchtantra is a very famous storybook. It is the most ancient storybook ever firstly it is written in Sanskrit then it is converted into Hindi. It is based on animal stories.

We learn the moral ethics of loss and gain, how to deal with friends, how friends can help us, and how to come out from difficulties.

In short, it is based on life lessons but it is showcased by animal stories. Vishnu Sharma is the author of this book.

Panchtantra is a bunch of five moral values it is related to man’s integrated development of life in which prosperity, friendship, learning, and security are combined to create joy. Sometimes at the end of the story, it gives a straightforward moral message, and sometimes readers have to understand the moral in their own way.

Vikram and Betal are based on a mythological story. This comic is written by Mahakavi Somdev Bhatt. It is based on Betal’s Pachisi. Here pachisi means 25. Betal is a ghost who is set on King’s back and tells all 25 stories to King Vikram.

Every time when Betal told a story at the end he ask one query to the king and if the king couldn’t answer then he can kill the king and take his all power to rule the kingdom also king break his silence then flies back to the main tree where they started and the story went on and on but the king has maintained his patience and reaches desire destination and Betal failed in his plan. Stories are interesting readers get involved in them.

Whenever any situation happens and the king can’t take any decision then Birbal helps him. Many times people think that Birbal has the solution for every puzzle.

Many people are jealous of Birbal also they try to trap him but Birbal proves them wrong every time. Lots of things we can learn from Birbal.

So many stories are there when we actually implement Birbal‘s formula to overcome tricky situations. These folktales taught us how to calm down and take the right decisions.

This comic is based on a simple boy. It is created in1973 by Prankumar Sharma. Billoo is a teenage boy. He has fun-loving nature. Due to this many girls like him in school but he is not a Casanova-type boy.

He usually plays cricket with his friend and breaks the window glass then is punished by his elders. He has a pet Moti and other friends called Jozi, Gabdu, Mono, Bishmber, etc. Billoo is famous because of his look.

His hair covers his eyes and forehead. His cartoon character and his naughtiness made this comic famous among children. In earlier times story is based on childhood friendship and after that Jozi is become Billoo’s girlfriend.

Nagraj is the fictional hero in Indian comics. This character is created by Raj Kumar Gupta in late 1980. As the name suggests it is inspired by Ichchadhari nag from Hindu mythology. Nagraj has every supernatural power.

He can change his personality, he can resize his body or he can convert into anything. That time comes when people take this comic as snake mythology and are also interested to know about it.

Doga is a fictional hero like our Hindi movies, Who fights for ethical values, Who thinks that to resolve the problem we have to enroot the problem itself. Doga wants to clean all the crimes from his city.

Mostly his stories are based on reality not science fiction based. That’s why people can connect with it. He doesn’t believe in the system he thinks that the whole system is corrupt. He wears a dog mask on his face so no one can identify him and he became popular with Doga.

His name is Sooraj. It’s the story of an orphan boy called Sooraj who is hostage by dacoit Halkan Singh to protect himself from the police. After a time Sooraj escaped from Halpat Singh’s trap and stay with his paternal uncle by doing gym and martial arts he become strong physically after that he fight again all the crimes and become popular as a hero called DOGA.

Shrimatiji is the oldest character created by Pran Kumar Sharma in 1968. Her name is Sheela and the magazine is named after Sarita. She is a lady in her thirties who has 2 kids and a husband.

She is a typical middle-class housewife who wants to go to the beauty parlor and kitty parties. She lives her life fully and wants to do everything that life gives her. This magazine especially targets Indian housewives.

Tinkle is a very famous and beloved comic magazine among children. It is founded in 1980 by Anant Pai or Uncle Pai. It has 8 different series. It is published in    English and also in Assamese and Malayalam. Suppandi and Shikari Shambu are the two main characters of this magazine.

It contains not only stories but puzzles, quizzes, general knowledge, games, contest, and regular comics for school children also. It proves that we can learn new things by doing fun also. In this digital world, we can get tinkle as an application also.

By subscribing to this application we can read previous issues also. It is a good combination of entertainment and learning.

Amar Chitra Katha is based on Indian people’s biography, religious figures cultural stories. It is created in 1967 by Anant Pai. The reason behind this magazine is that Indian children can know about their cultural heritage.

They can inspire by real heroes who had to achieve major milestones in their life and also had faith in religious icons like Lord Rama, Lord Krishna, and Shiva.

The author also covered Ramayana and Mahabharata in this book. It is important to share our historic and mythological knowledge with every new generation.

Bankelal is known as the king of comedy in an earlier times. He was presented by Raj comics in 1987. Every story has some different issues to present but in this comic, the main motive is to get the throne of king Vikram Singh.

Every time he plans to kill the king but he fails.  By doing mischief he creates humor. Whenever he tries to do something things get reversed to him but he never gets hurt and Vikram Singh gets favors. Bankelal’s appearance is also very funny he looks like Charlie Chaplin.  He had a mustache and his two long teeth are coming out when he laughed.

Super commando Dhruva is a fictional character of “Pratisodh ki Jawala” by Anupam Sinha In 1987. His name is Dhruva Mehra and it is famous as captain Dhruva. He is not the typical type of superhero who has special superpowers.

He is the founder of a fictional government called crime-fighter organization commando force. He wears a yellow and sky blue costume with brown boots and a belt with a star symbol.

He solved any task with his intellectual skills, detective skills, scientific and general knowledge, and martial arts. He never hides his real identity and never wears any mask.

He is very kind to everyone and has no ego for anything. He becomes popular in a short time. Even many fans ask him to debut in Bollywood movies.

Pinky is 5 years of girl. She has a pet squirrel called Kutkut. This comic character is also created by Pran Kumar Sharma in 1978. This comic is printed in 10 different languages. Pinky is very popular in children there for Pran Kumar Sharma takes her in Billoo and Chacha Chaudhry also. Whenever she tries to manage something she creates a mess.

These are the top 15 comics of India that made our childhood memorable. Many more comics are also there but this all had made some special place in our hearts. Some characters have become real to us they are not fiction anymore. Most of the comics are get visualized on TV also.

Top 15 Most Successful Female Entrepreneurs in the World