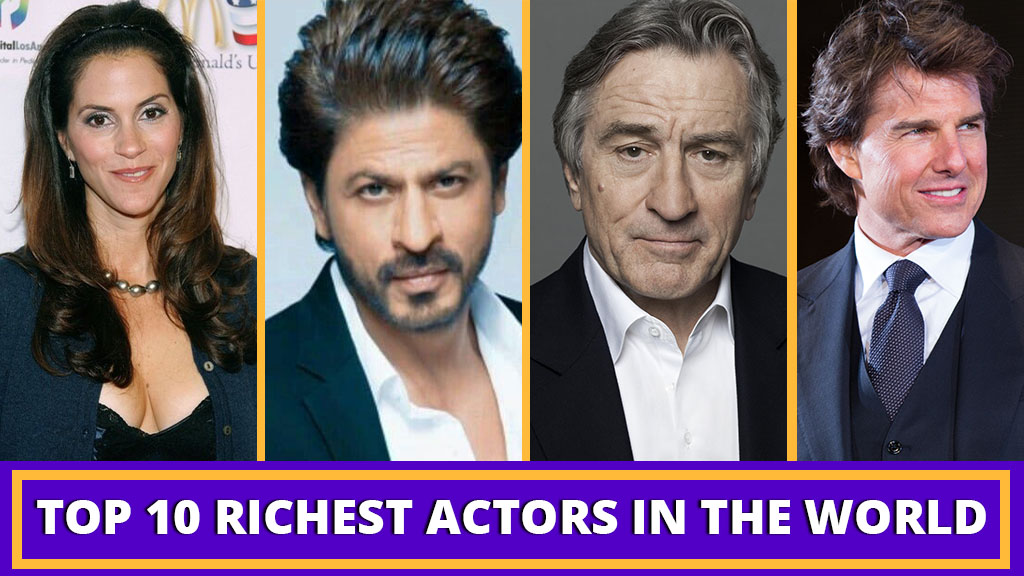 Have you ever wondered who can be the Richest Actors In The World? Don’t worry we are about to show you the list. The list contains some of the most popular and richest actors in the world that are worth more than half of the billion dollars.

There are so many actors who are famous but only a handful of actors from those who become iconic and have a lot more worth than the rest. We have performed deep research and prepared a list of high grossing top 10 richest actors in the world. Let’s have a look. Jami Gertz is taking 1st place in the Top 10 Richest Actors In the World. Her famous quote is

“Sometimes movies gloss over things, and it was important to me that this was realistic.”― Jami Gertz

Jami Gertz is a popular American actress and an investor too who has been widely known for her roles in great movies like Crossroads, Twister, Less Than Zero, The Lost Boys, and Quicksilver. She is popular for her appearances in popular television series. It’s believed that the majority of her worth has been derived from her husband Tony Ressler, Ares Management’s Co-founder. Both Gertz and Ressler are co-owners of the Atlanta Hawks NBA team. “Make no mistake about why these babies are here, they are here to replace us.”― Jerry Seinfeld

Jerry Seinfeld is one of the popular and richest actors in the world who has an incredible net worth of $950 million. He got high and eminent fame from his successful and long-lasting television series “Seinfeld” from which he earned $1 million for every single episode. Even at this age of 65, he is having many projects lined up and there is no sign of his retirement. “Success is not a good teacher. Failure makes you humble.”― Shahrukh Khan Quotes

Shah Rukh Khan is one of the most popular, eminent personalities and most liked by Indian and international audience. Often known as the King of Bollywood, SRK has appeared in more than 80 Bollywood movies and charge almost Rs. 20-25 crore for one film i.e. 30-35 million USD.

His popular movies include Devdas, Chak De India, Dilwale, Darr, and many more. He is the owner beautiful mansion in Mumbai Mannat plus he is co-chairman of Red Chillies Entertainment and co-owner of Kolkata Knight Riders cricket team of Indian Premier League. “Even in my dreams, I’m an idiot who knows he’s about to wake up to reality.”― Tom Cruise Quotes

Tom Cruise is a popular American actor and producer from New York and is known as the best and richest actors of all time. He is a 3 times winner of the Golden Globe award and has been a part of several blockbuster movies.

His notable Hollywood films include “Top Gun”, “Mission: Impossible”, and “Rain Man”. Tom is a co-founder of Cruise and Wagner productions with Paula Wagner. His net worth being $570 million helps him to be the 4th richest actor in the world. “An acting career usually has a shelf life of about 10 years before people get sick of seeing you.”― George Clooney

George Clooney is a mix of talent being an American Actor, Director, Screenwriter, and activist making himself one of the A-list Hollywood actors. Some of his popular films are “Good Night”, “Ocean’s Eleven” and “Good Luck” that was directed and acted by him.

Clooney along with his wife lawyer Amal Alamuddin has a real estate portfolio worth $100 million. He has received so many awards for his great movies and his net worth is $500 million. Robert De Niro is taking 6th place in the Top 10 Richest Actors In the World. His best quote is

An American writer, director-producer, and entrepreneur Robert De Niro is a widely known actor in cinema. Some of his famous movies with notable performances are “The Godfather II”, “Raging Bull”, “Taxi Driver” and “Goodfellas”.

He is a co-owner of Greenwich hotel of New York. He is a founder of the restaurant chain Nobu with Nobu Matsuhisa spread over forty locations over the world that is generating revenue of several hundred million dollars every year. He is taken 7th place in the Top 10 Richest Actors In the World.

“A lot of critics object to what I do, but I got into comedy to make people laugh, and I’ve always worked hard.”― Adam Sandler Quotes

Adam Sandler is the seventh richest actor in the world who has made several dozen off successful movies over the box office. Some of his top movies are “Billy Madison”, “Happy Gilmore”, “Click”, and “Grown Ups”.

Adam Sandler is widely known for his amazing comic timing, and not only this he has also played good serious roles. He went popular when he did a movie that was for $271 million at the box office. Now, his net worth is $20 million and he is one of the richest actors and producers as well. “Everybody wants to live. But sometimes the body just gives up.”― Amitabh Bachchan Quotes

Amitabh Bachchan, an Indian film actor, producer, TV host, playback singer, and a former politician, in fact, is an all-rounder. He gained popularity with his blockbuster movies Zanjeer, Deewar, and Sholay.

From that time he is known as the “Angry Young Man” of Bollywood. He is regarded as one of the greatest actors of Indian Cinema. According to him, he learned more of acting after he performed “Ganga Jamuna” in 1961.

Currently, he is a famous actor who has a net worth of $400 million and is the 8th richest actor in the world. Sylvester Stallone is taken 9th place in the Top 10 Richest Actors In the World. And his popular quote is

“Once in one’s life, for one mortal moment, one must make a grab for immortality; if not, one has not lived.”― Sylvester Stallone

An American actor, director, and producer Sylvester Stallone has gained revenue of more than $4 billion. Some of his notable works are “Rocky”, “Rambo”, “The Expendables” and many other great movies.

His movie “Rocky” was a great hit at the cinema and helped him earn $117 million at the box office. The actor has received several awards and today he has a net worth of $400 million. “With sons and father, there’s an inexplicable connection and imprint that your father leaves on you.”― Brad Pitt Quotes

Brad Pitt is an American actor and a great film producer too. 56 years old Brad is known as one of the most influential personalities of American Cinema.

His famous films include popular names like “A River Runs Through It”, “Fight Club”, “Mr. & Mrs. Smith” and some other blockbuster hits. It is known that Brad has got more revenue being a producer than being an actor and currently his net worth is $300 million.

Final Words For Top 10 Richest Actors In The World

So this was a conclusion from so many famous actors over the world that are the richest than others. The net worth these actors currently pursue can’t be considered as permanent as there is no limit for a person in Bollywood to earning.

Arijit Singh’s Net Worth And Quotes