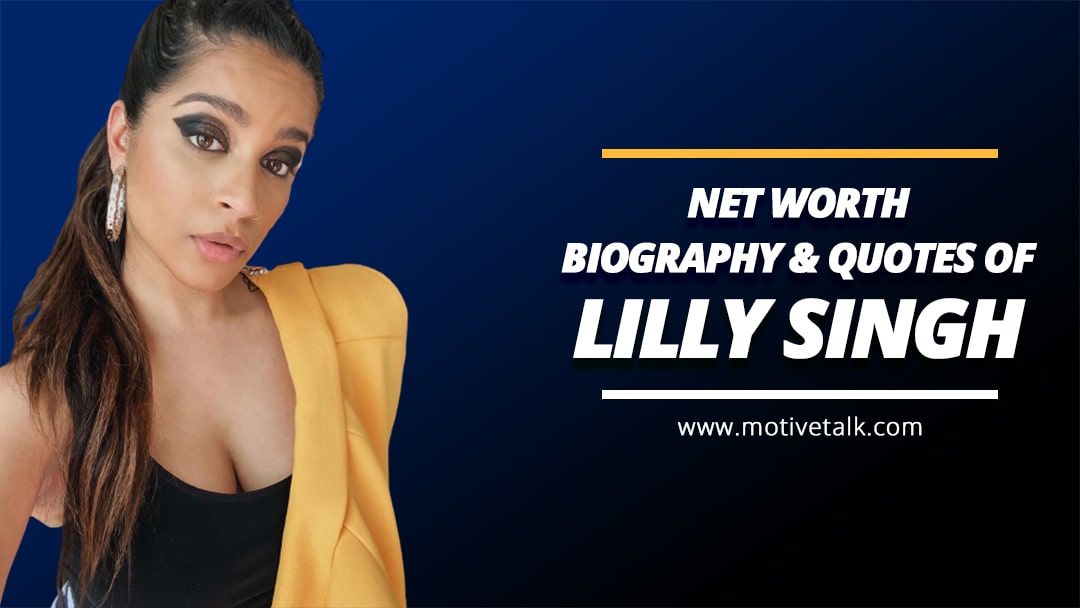 In this post, we will talk about a few Quotes from Lilly Singh. Lilly Singh Net Worth (10.5 Million USD) And Biography. Without further ado, let’s start the topic;

Lilly Singh also famous as a Superwoman is an Indian origin but born in Ontario, Canada. She is a famous YouTuber actress, rapper, and a well-known comedian.

She has been brought up with the traditional Sikh upbringing by her parents who had moved to Canada from Punjab. Being the first-ever South Asian woman to be a YouTube comedian she has become a celebrity gaining name and fame so rapidly.

She has acquired more than 3.2 billion YouTube views and around 14 million subscribers on her channel IISuperwomanII. Only in the twenties, she has got much of the fame that most people desire to have throughout their life.

YouTube channel Superwoman was ranked on 39th position in the Top 100 YouTube channels in 2014 by the magazine named ‘New Media Rockstars’. She is also popular for her motivational videos. She is a good rapper as well and has released many songs and music videos of her alone and in collaboration.

Lilly Singh Net Worth and Career Lilly has also been ranked in 8th position in the Forbes World’s highest-paid YouTubers list. And she was also recognized by ‘Fast Company Magazine’ under the 100 ‘Most Creative People in Business’.

She started making YouTube videos in December 2011 as a way of coming out of her struggling depression. She started her vlog named Superwoman that includes her daily activities and footage behind the scenes as well. She has also documented her meetings with several Bollywood and Hollywood stars.

She has stated in a tweet that she is a bisexual woman and she loves being the way she is. “Female, colored, bisexual”.

She made her appearance in the music video of Jassi Sindhu named as ‘Hipshaker’. She had her cameo role in ‘Gulab Gang’ and has rapped for one of its songs Mauj Ki Malharein. She also has one more channel of her i.e. Lilly Singh vlogs which has 3 Million subscribers and 400 Million views. By counting her number of subscribers and views on Superwoman, it is estimated that she earns almost $4,800 per day and her second channel has revenue of $200,000 on yearly basis from her subscriber views and advertisements on her channel.

On the announcement of her talk show, A Little Late with Lilly Singh, she emerged as a guest on The Tonight Show and expressed her zest the show to host Jimmy Fallon, by mentioning that “Indian-Canadian woman with her own late-night show”. Lilly has grown up to be one of the highest-paid persons that have an average income of 10.5 Million USD per year as of 2020.

Lilly is a great example for those teenagers who are spending their lives in depression and how to be humble to all instead of being the richest person. “When you’re in a situation in which work needs to get done, put those emotions away. Emotions can cloud your judgment and reduce productivity.” ― Lilly Singh Quotes

“I don’t know who came up with this idea that it’s cool to hate on other girls, ’cause it’s not.” ― Lilly Singh Quotes

“There is a switch within all of us that we can flick from survive to conquer. Even though we need to survive sometimes, we shouldn’t get too comfortable in our life jackets.” ― Lilly Singh Quotes

“Think of discomfort as currency, it’s the price you pay to learn some pretty crucial things.” ― Lilly Singh “There’s always a way to be open and honest while also being respectful. Anyone who behaves other wise is just being lazy.” ― Lilly Singh Quotes

“Fighting for happiness is the hardest thing you’ll ever fight for, but it’s the only thing worth fighting for.” ― Lilly Singh Quotes “There is no shame in falling down but there is pride in getting back up.” ― Lilly Singh Quotes

“Don’t be afraid to ask for things. The worst that will happen is that you’ll be told no. Just remember to smile, stand tall, and look as adorable as possible.” ― Lilly Singh Quotes

“In my life I’ve gone through a lot of really hard times. I went through depression and had so many challenges that I overcame. And I overcame because I just decided to be happy.” ― Lilly Singh Quotes

“There is no escalators, there’s only staircases to success. There is no substitute for hard work.
” ― Lilly Singh “For anyone aspiring to be anything, I would like them to realise dreams require work. So work big time.” ― Best Lilly Singh Quotes

“You’re a human and you’re allowed to feel things. There’s no shame in that.” ― Lilly Singh Quotes

“It’s really important to talk to yourself and look at yourself in the mirror and love who you are.” ― Lilly Singh Her mission GirlLove is helping several girls of Kenya to earn money for their own education. Her worth can be earmarked by her works for underprivileged children. Being the only female to work for late-night shows she has made her fans celebrate the success of a comedian.

Talking about her awards and achievements, Lilly Singh has scored a number of them including Social Superstar of the year from MTV Fandom Awards(2015), Streamy Awards(2015) Two Teen Choice Awards(2016), People’s Choice Award as a favorite YouTuber(2017).

Her vlogs mostly contain the satirical video on the life of common people and also have a touch of Punjabi culture it is very appreciated by the audience of her channel. One of her popular videos includes the character of her parents that are fictional and played by herself only.

She has also been a part of several TV series like Dr. Cabbie, Ice Age, Tawk, Bad Moms, and many more. She has also released a song of her in 2014 with the title as #LEH along with her friend Kanwar Singh, rapper, author, and known as Humble The Poet. In 2016, Lilly has released one visual music video on YouTube, named “Voices“. The video has 5 songs presenting the “voices in her head”.

She moved to Los Angeles in the year 2014, where she collaborated with other YouTubers like Connor Franta and Fousey Tube.  Her income keeps on increasing year by year. She is an active participant in charity works.

As per the recent reports, Lilly Singh’s net worth is more than $20 Million that she acquires from her career as a singer, YouTuber, actress. With these amounts, you can easily calculate what her worth can be. But her worth is something more than money as she is always ready to support the unprivileged, girls who didn’t get equality, and other social causes.

10 Best Things To Do When You Feel Like Giving Up