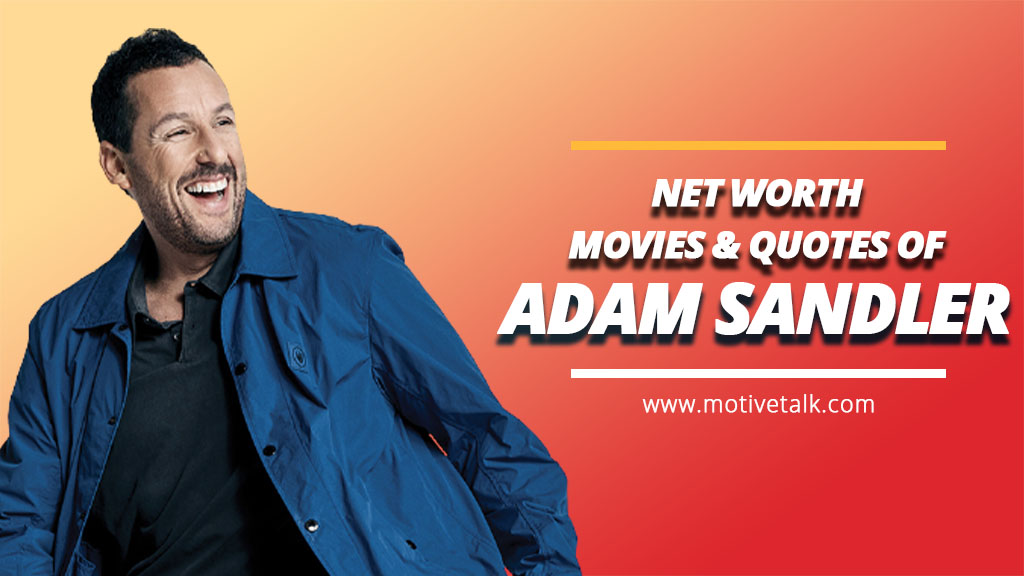 Adam Richard Sandler or better known as Adam Sandler was born on September 9, 1966, in Brooklyn, New York City, USA. Adam is a renowned American comedian, actor as well as a great filmmaker. He even has been a cast member for Saturday Night Live from the year 1990 to 1995 before entering the Hollywood movie world.

Adam Sandler is widely known for his comic roles like “Billy Madison” from 1995, Happy Gilmore from 1996, Big Daddy from 1999, and “Blended from 2014. He also gave his voice for the Dracula of the “Hotel Transylvania Franchise” from 2012 to the present.

He was born as the son of Judith “Judy” who was a nursery school teacher and Stanley Sandler who is an electrical engineer. He belongs to a Jewish family and is a descendant of Russian-Jewish immigrants.

His family moved to Manchester in Hampshire when Adam Richard was just six years old, there he went to Manchester Central High School.  He never aspired to be a humorist until he was 17 when his brother cheered him to act at the Boston comedy club. He then explored that there was a sense of natural comedy in him and then he started nurturing his talent while he was at New York University.

There he started performing regularly for the clubs on the University campus. He then graduated with a degree in Bachelor of Fine Arts in 1991 from Tisch School of Arts in New York University. In his teenage, Adam was in BBYO, which was a famous Jewish youth group.

After completing his graduation, he became consistent as a Stud Boy for a game show by MTV known as “Remote Control”. He got his first film “Going Overboard” in 1989 and then was noticed in a show “Saturday Night Live” from 1990 to 1995 where Sandler invented his different characters like Opera man, Cajun man, and Canteen Boy.

The Journey of Adam Sandler Movies and Career After appearing in his debut movie in 1989, Sandler continued performing at comedy clubs. Great comedian “Dennis Miller” at a comedy club in LA observed him this was when SNL producer “Lorne Michaels” chose him for his show on the former’s recommendation.

With that, he worked for making his name by appearing for the comical songs on the show like “The Thanksgiving Song”, and “The Chanukah Song”. Later, Sandler on “The Tonight Show” told Conan O’Brien that he along with Chris Farley was fired by NBC.

Adam appeared in the film “Coneheads” (1993) with Chris Farley, Jane Curtin, Phil Hartman, Dan Aykroyd, and David Spade. Then in his movie Airheads (1994), he co-starred the movie with Brendan Fraser. He then played the role of a grown man who goes on repeating grades from 1-12 just to earn his father’s respect in the movie “Billy Madison”.

The movie got huge success even after being criticized at a huge level. Following this, he appeared in “Bulletproof”, and  “Happy Gilmore” in 1996 and “The Wedding Singer” in 1998. Even though the earliest of his movies were successful in gaining enough attention but his movies, begin to receive positive and praiseworthy reviews with his movie “Punch-Drunk Love” of 2002.

A review of this film by “Roger Ebert” stated that Sandler has been wasting his career in earlier films that were not written well and had characters with no development. For this movie, he even got nominated for the “Golden Globe award”.

In 2009 he was starring in “Funny people”, a comedy-drama by “Judd Apatow’s” which was about a famous comedian with a terminal illness. This movie was released on 31st July 2009. The two movies; Punch-Drunk Love and Funny People, helped Sandler to be one of the top 135 people that were welcomed to join the “Academy of Motion Picture Arts and Sciences”.

Thereafter, he appeared in Disney Channel Original Series “Jessie” being himself in 2013. His other film titled “Hubie Halloween” was devoted to the memory of Boyce.

Sandler even formed his production company for movies named Happy Madison Productions, the name is derived from the titles of his movies “Happy Gilmore” and “Billy Madison”. In 1999, the first movie produced by the productions with an alumnus from Saturday Night Live Rob Schneider was “Deuce Bigalow: Male Gigolo”.

Most of the films released from the production house have received huge criticism and negative reviews and three of those were even considered as worst movies ever made.

Several other actors have faced trouble sometimes in performing different genres, but Adam Sandler was someone who proved his skills that he is made both for comic and dramatic roles and can effortlessly switch among them. He is also a great song and scriptwriter and has frequently produced amusing and entertaining material. Sandler tied knots with Jacqueline “Jackie” Sandler in June 2003. Later to the marriage, she was converted to Judaism, the religion followed by Sandler. The couple is happily married and is blessed with two daughters Saddie and Sunny. “I was just a young guy who was excited to become a comedian and an actor and I just wanted to get to do what I got to do.” ― Adam Sandler Quotes

“I do love the films I’ve done in the past. I work hard in my movies and my friends work hard and we’re trying to make people laugh and I’m very proud of that.” ― Adam Sandler Quotes

“I’m not making every decision due to my children. But I do hope they never see some movies I’m doing. But I do want to do more family-friendly movies.” ― Adam Sandler

“I think when I bought a house, that’s when I thought I felt like that’s a grown-up thing to do.” ― Adam Sandler Quotes “I say things, like every other parent, that reminds you of your own parents. One thing I do know about being a parent, you understand why your father was in a bad mood a lot.” ― Adam Sandler Quotes

“I had my moments of being humiliated, and then I had moments of doing something humiliating. I’m glad I lived out both roles.” ― Adam Sandler Quotes

“I was just a young guy who was excited to become a comedian and an actor and I just wanted to get to do what I got to do.” ― Adam Sandler

“I still get very scared when I step in front of a live audience.” ― Adam Sandler Quotes “I have a love in my life. It makes me stronger than anything you can imagine.” ― Adam Sandler Quotes

“In high school, I wanted to be a rock star and was in a lot of bands.” ― Adam Sandler Quotes

“I do love the films I’ve done in the past. I work hard in my movies and my friends work hard and we’re trying to make people laugh and I’m very proud of that.” ― Adam Sandler

“My comedy is different every time I do it. I don’t know what the hell I’m doing.” ― Adam Sandler Quotes “Feels good to try, but playing a father, I’m getting a little older. I see now that I’m taking it more serious and I do want that lifestyle.” ― Adam Sandler Quotes

“Chemistry can be a good and bad thing.” ― Adam Sandler Quotes

“I don’t know what drives me to succeed. I guess I was maybe in little league baseball as far as I wanted to be good at that. But school, I certainly wasn’t the best at that.” ― Adam Sandler

“I was just a young guy who was excited to become a comedian and an actor and I just wanted to get to do what I got to do.” ― Adam Sandler Quotes Adam supports the “Republican Party” and in 2007, he donated $1 million to the “Boys & Girls Clubs of America” in Manchester and also donated $2100 to New York City’s former mayor “Rudy Giuliani”. In 2014, Adam Sandler along with his production company Happy Madison was signed for four movies from Netflix. And in January, a similar deal was re-announced with a worth up to $275 million.

Whatever Adam has managed to accumulate is the result of his great efforts towards his work.