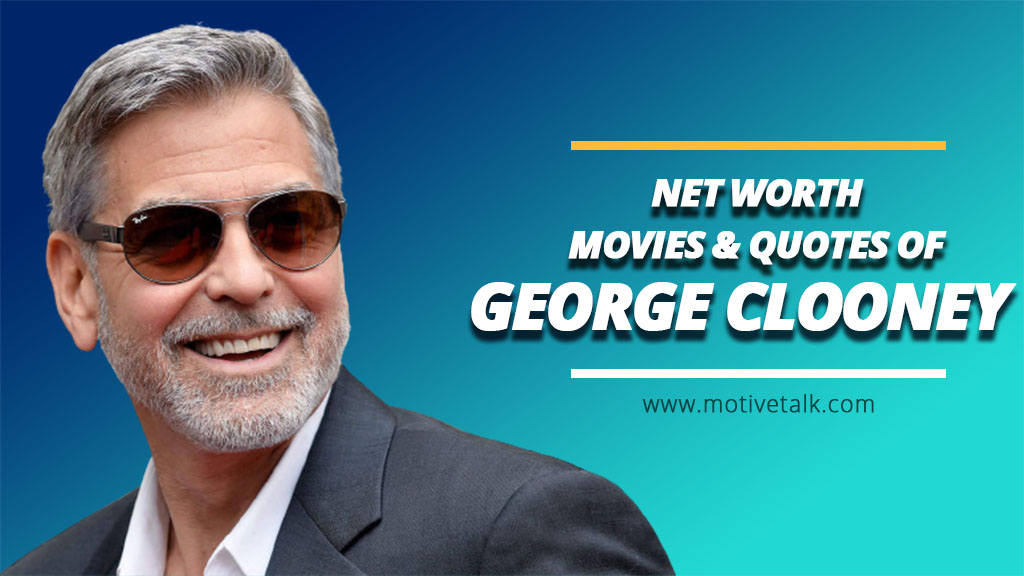 George Clooney is a well-known actor, producer, and writer in Hollywood. In this blog post, we will know about George Clooney Net Worth (500 Million USD), Movies List, short Biography, and Quotes. Let’s start the topic;

George Clooney better known as George Timothy Clooney is an American actor as well as filmmaker and philanthropist who was born on May 6, 1961, in Lexington, Kentucky, US. He has appeared in most of the movies released during the 1990s as the main lead.

Clooney is a man who is known for his good looks, versatility to perform, and later on, after years, he becomes a reputed & respected screenwriter and successful director.

George Clooney got to make his debut in Hollywood with a TV show in 1978. But he gained fame and recognition after some time with his character as Dr. Doug Ross in a medical drama “ER” that run continuously from 1994 to 1999.

The actor even got nominated for the “Primetime Emmy Award” due to his performance. However, while working on ER, he started getting several breathtaking roles like those of “From Dusk till Dawn”, “Out of Sight” and “Three Kings”.

The mother of George Clooney was a renowned beauty queen and city councilwoman while his father Nick Clooney is a former news anchor and popular TV host five years of whose work was dedicated to the AMC network.

His upbringing was done as a strict Roman Catholic, but in 2006, he said he didn’t know if he even believed in God or Heaven.

The early schooling was done at Blessed Sacrament School based in Fort Mitchell, Kentucky. He also joined “St. Michael’s School” in Worthington, Ohio and later to “Western Row Elementary School” in Mason, Ohio from the year 1968 to 1974.

Then his family decided to move back again to Kentucky when George was in seventh grade. But, during his middle school days, he acquired Bell’s palsy that left half of his face paralyzed.

Clooney didn’t complete his graduation besides the fact that he attended Northern Kentucky University (with broadcast journalism as a major) and then attended the University of Cincinnati.

Rather he begins making money by selling shoes for women, door-to-door insurance, and working for construction, tobacco cutting, and stocking shelves. Clooney’s initial goal in life was to be a baseball player even after having a background in show business. But, when he got failed in his auditions with the Cincinnati Reds, he moved to LA for pursuing acting as his career at the age of 21. Initial two years, he worked for appearance in TV sitcoms.

Even though he lands in some repetitive roles quite early for popular series including “The Facts of Life” and “Roseanne” but his contribution to TV was truly remarkable.

He got his big break in 1994, with the role of Dr. Doug Ross for medical drama “ER”. He starred in several movie series like “Batman & Robin”, “The Peacemaker”, “Out of sight” and later in 1999, George Clooney decided to leave the series ER to focus on his career. Then he got a big breakthrough with “Three Kings”.

Then he got a peculiar film by “Coen Brothers” that was titled “O Brother, Where Art Thou?” for which he was even rewarded with the “Golden Globe Award” for his great performance. His “Ocean’s Eleven” which was released in 2001 had a con artists’ group that robbed a casino.  In 2001, Clooney along with Soderbergh co-founded a production house as “Section Eight Productions”.

Then his directorial debut was made in 2002 with the movie “Confessions of a Dangerous Mind”, which was based on the autobiography of “Chuck Barris”, a famous TV producer.

Then in the year 2005, Clooney got starred in “Syriana”, which was grounded on Central Intelligence Agency’s former agent “Robert Baer” confessions of his service years in the Middle East. Unfortunately, on the set of “Syrian”, Clooney met with an accident that caused him brain injuries.

And later in the same year he produced, directed as well as starred in “Good Night, and Good Luck” that was about a TV journalist Edward R. Murrow for which he was even nominated in the Academy awards for the year 2006, with “Best Director” and: Best Original Screenplay” and also “Best Supporting Actor” for Syriana. His role in Syriana helped him win Oscar. He also performed roles in some tight-budget films like Combat Academy and Return to Horror High in 1987, Return of the Killer Tomatoes in 1988, Unbecoming Age (1992), and The Harvest in 1993. However, his role as Dr. Doug Ross was the one to help him got awarded.

In the 1990s George Clooney was noticed in some top movies like The American, Money Monster, From Dusk Till Dawn, One Fine Day, The Peacemaker, Out of Sight opposing Jennifer Lopez.

His 2000’s release “O Brother, Where Art Thou” got him a Golden Globe award, Empire Award as well as nominations for Satellite award. If you don’t drink coffee, I am suspicious of your character and will not invite you to my Italian lake home.” ― George Clooney Quotes

“It’s possible for me to make a bad movie out of a good script, but I can’t make a good movie from a bad script.” ― George Clooney

“An acting career usually has a shelf life of about 10 years before people get sick of seeing you.” ― George Clooney Quotes “It’s a humbling thing when you find someone to love. Even better if you’ve been waiting your whole life.” ― George Clooney Quotes

“You never really learn much from hearing yourself speak.” ― George Clooney Quotes

“I was very lucky to get well known much later in life. You need to have flopped quite a few times to get a sense of how little any of it has to do with you.” ― George Clooney “The hardest thing is trying not to correct everything on the Internet.” ― George Clooney Quotes

“You need to have flopped quite a few times to get a sense of how little any of it has to do with you.” ― George Clooney

You get better as an actor over time if you’re growing. Like singers.” ― George Clooney Quotes “When a man hits 40 is when roles just begin to happen. And for women, it doesn’t happen. I find that to be a very concerning issue.” ― George Clooney Quotes

“For me, the definition of a patriot is someone who will constantly question government.” ― George Clooney

“Directing is really exciting. In the end, it’s more fun to be the painter than the paint.” ― George Clooney Although ER was his initial drama, but the money that he managed to make with it TV show was not even comparable to the money he was from Warner Bros paid him. Warner Bros. waged him with $10 million dollars for his role.

It is believed that if George Clooney didn’t get enough busy in his career, he would have become a businessman in 2013 after co-founding “Casamigos Tequila”. He got paid when the Rande Gerber & Michael Meldman was sold to Diageo for worth $700 million dollars.

In the year 2010, it was estimated that George Clooney net worth was 500 million dollars. Moreover, in 2018, he has recognized as the world’s highest-paid actor as he made $239 million dollars with several advertisements and sales from Casamigos.

For the year 2020, it is evaluated that George Clooney’s net worth is standing at $500 million and it is believed the worth is only going to increase with his talent and Casamigos sales.