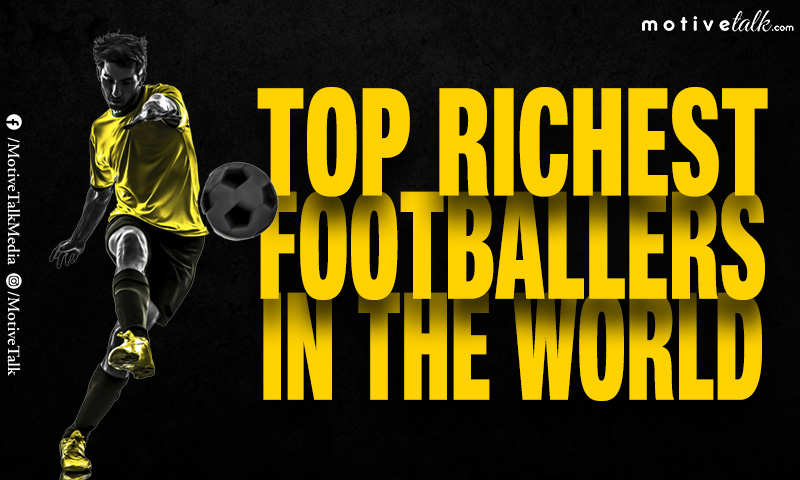 Are you curious to know about Richest Footballers in the World? Then you will get the answer today from this blog post.

Is Messi richer than CR7? Is he a billionaire? Is CR7 the richest among athletes? In what ranking among the richest footballers of the world does Neymar rank?

Is your favorite footballer, Pele on the list of the richest footballers? Are all these questions playing football in your mind? Then, that is what probably has dragged you did this article.

Football has always been a favorite sport of every generation. It is also one of the most-watched games by people irrespective of male or female. Playing football is really lucrative. And that is why some of the richest people in the world are also footballers.

We know how much curious you might be to know whether your favorite is there on the list or not. So without speaking further we would directly get to the list of top 11 footballers who are regarded as the richest among the other footballers in the world.

Stated below are the top 11 richest footballers in the world along with their net worth mentioned.

The former English professional football player and the current football manager, Wayne Mark Rooney Was born on 24th October 1985 in Liverpool, England. During his playing career, he has played as a forward player while also mastering various midfielders roles.

He is considered one of the greatest players of the generation. He has created records for teams where he has played including Manchester United and the national team of England. The estimated net worth of this 5 feet 9 inches tall footballer is said to be almost $145 million.

This Brazilian professional football player has an estimated net worth of $145 million. He made his debut when he was 16 years old in the year 2006. He’s played for a number of clubs like Chelsea AC Milan, Tianjin Quanjian, Sau Paulo, etc Before he finally settled as a player for Orlando City SC.

He is one of the brightest shining stars in the history of Brazilian footballers.

Originally named Ronaldo Luís Nazário de Lima, but popularly known as Ronaldo is a former Brazilian footballer who has now turned into a businessman. Ronaldo is one of the world’s greatest and best finishers people have ever seen.

He was born on 18th September 1976 in Rio de Janeiro, Brazil. He used to play as a striker. He has been an influence on many people who wanted to be a great striker like him. The estimated net worth of this great player is $160 million.

Maybe You Also Like: Top 9 Richest Cricketers in the World

Zlatan Ibrahimović, the Swedish professional football player was born on 3rd October 1981 in Malmö, Sweden. The 6 feet and 5 inches tall professional plays as a striker for the AC Milan club. All across the world, He is regarded as one of the most popular and greatest strikers in the history of football.

He is not said to be one of the biggest footballers for no reason. He has 31 trophies In his name.

Throughout his career, he has scored more than 570 goals which include over 500 goals for his club. The estimated net worth of this 40-year-old Swedish player is nearly $190 million.

He plays for Paris Saint-Germain Football Club and Brazil’s national football team. He is a professional football player who is very much loved by people all around the world and they regard him as one of the best and greatest players in the world.

The estimated net worth of this 5 feet 9 inches professional footballer is $200 million.

Dave Whelan the former footballer and a now English businessman was born on 24th November 1936 in Bradford, England. As a footballer, he has played for Professional football club associations like Crewe Alexandra and Blackburn Rovers.

He has been the chairman of Wigan Athletic Club for over 20 years and also the former owner of it.

He then passed it to his grandson, who later passed the ownership of it to an international entertainment corporation. The estimated net worth of Dave Whelan is $220 million.

Robert was born on 2nd May 1975 in London. He’s a former English player. He’s the current co-owner and president of the Inter Miami CF and also the Salford city. He was once a player of Manchester United, Preston North End, LA Galaxy, Paris Saint-Germain, AC Milan, Real Madrid, and also the England national team.

The only English player who won league titles for four different countries including England, Spain, France, and the United States.

Lionel Messi commonly called Leo Messi Was born on 24th June 1987 in Rosario, Santa Fe, Argentina. He’s the forward player and the captain of Argentina’s national football team. He also plays for Paris Saint-Germain. He is often regarded to be the best player in the world right now and is one of the greatest players of all time.

As a professional player until 2021, he had a dedicated football career playing for the team Barcelona. Likewise Ronaldo, Messi also has numerous titles, awards, and trophies.

Though this 5 feet 7 inches player is so popular, his net worth is however less than Cristiano Ronaldo. Messi’s estimated net worth is $400 million.

The top 3 Richest Football Players are below

Now time for everyone’s favorite CR7. Ronaldo was born on 5th February 1985 in Funchal, Madeira, Portugal. He plays for one of the most well-known premier league clubs, Manchester United, and also is the captain of Portugal’s national football steam team.

Cristiano Ronaldo throughout his career has bagged numerous awards and trophies. Though he is one of the most celebrated football players around the world, his net worth is still far from reaching billions despite his grand earnings. His estimated net worth is $450million.

Mathieu Pierre Flamini was born on 7th March 1984 in France’s Marseille. This 5 feet 10 inches professional player has played for multiple men’s football clubs, like Marseille on the French side, Crystal Palace and Arsenal on the English side, Milan from Italy, and Getafe on the Spanish side.

Apart from being a professional player, he is also a GF Biochemicals co-founder alongside Pasquale Granata. The estimated net worth of Mathieu Flamini is $14 Billion.

Caught you! You were wishing it to be either CR7 or Messi to be the richest one, but no! Faiq Bolkiah is the richest among all. On 9th May 1998 Bolkiah was born in Los Angeles, California, United States. He is a part of the ruling royal Bruneian family.

He earns billions, which is much greater than other players on the list. His estimated net worth is $20billion. He is a midfielder and has also captained the national team of Brunei and also plays for the Thai club, Chonburi.

Conclusion of Richest Footballers in the World according to 2022

Hi, I'm a Head Content writer at Motive Talk. I have been in this content industry for the past 2 years now. I am interested in various industries and I always keep myself updated with new trends and content. I can help you will all the SEO-friendly top-notch content you desired to have that will increase the engagement of your website.