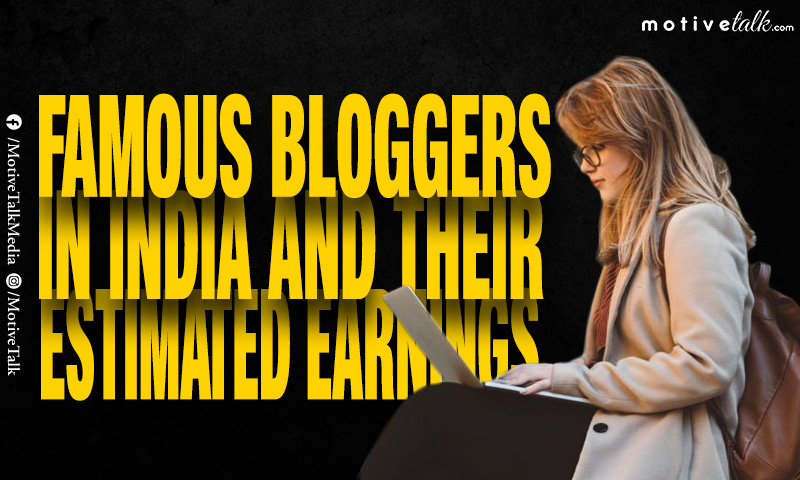 Blogging is the new passion among the people and to keep you motivated we are going to discuss the list of Top Bloggers in India and hope that it encourages you to keep on blogging. Not many bloggers reveal their actual earnings so it is a really difficult job to decide that holds the first position.

Famous bloggers in India are blogging on various topics of their choice, including Word press, travel, technology, Web Hosting, How to Do guides, and many more.

Blogging is not the only option to make money online, but only the most stable method. People are earning tons of money through freelancing, Instagram, Affiliate Marketing, TikTok, and YouTube. Among all these online sources blogging is considered to be the most stable source of income.

These Indian Bloggers are using Google Adsense, Affiliate Programs, and Direct Advertisement as a source of income. They are not only earning a good amount of money but also enjoy their life to the fullest without going to a 9 to 5 job. 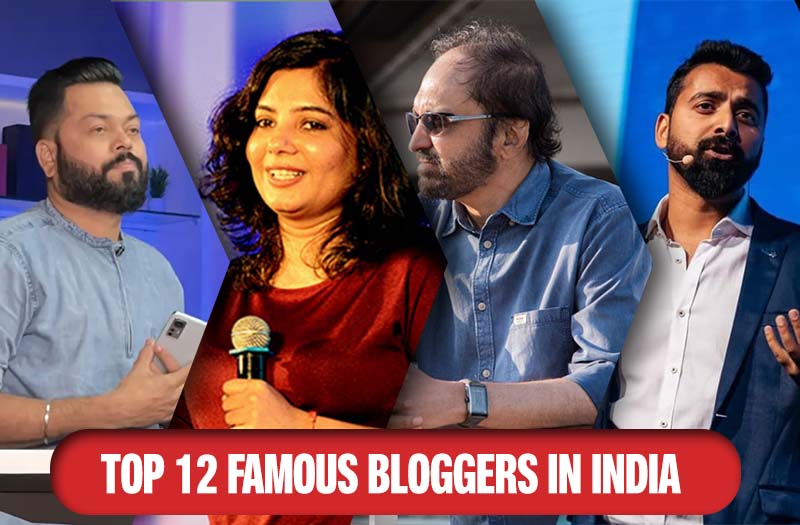 I am pretty sure that you heard about these famous bloggers in India or visited their blogs for valuable information. These bloggers are quite popular on the internet and receive millions of visitors on their websites on a regular basis. They started this work as a side hustle and are now earning a good amount of money. They have turned their hobby into a passion and a source of income and are inspiring millions of people around the world with their success stories.

Making money through blogging is not a very difficult job and it does not need a very huge investment. You need to consistently keep on blogging and your patience and talent will be noticed by the people. When people start appreciating your talent, it turns into money, which starts flowing into your bank account.

Let’s have a look at the Top 10+ famous Bloggers in India and their blogs.

If you have a good interest in blogging that this blogger’s name lies on the top of the list.  He is the most popular and first successful blogger from India who became a source of inspiration for many young bloggers. He was one of the first bloggers who shifted from a professional IT job to a full-time blogger and has been guiding ever since youngsters how they can make money by blogging.

Indian blogger’s hometown is in Agra and he has got a passion for computer science technology and following his passion he completed his graduation from IIT-Roorkee. In, 1999 he joined ADP, Inc in Hyderabad and managed their database for the next five years.

He quit his job and to follow his passion he came back to his hometown Agra and in 2004 he successfully launched a tech blog and named it Labnol.

The blog was How to guide consumer software and mobile apps that were free or cheap to use. Only his blog he explained to the layman the advantage of using software tools and technologies to make your work easy.

His site has an impressive ranking of 14,975 on the Global level and 2,313 in the Indian network.

He has never revealed his earnings but Indian bloggers Earning is estimated to be $80,000 (per month)

Next on the list of top 10 Famous Bloggers in India is the famous Harsh Agarwal whose blog ShoutMeLoud is one of the most prominent blogs in India.

Harsh Aggarwal is a qualified engineer by profession and even joined Accenture as an engineer in  2008. He quit his job just after five months and launched his blog in 2009.

In his own words, it was a very difficult choice to choose his job or follow his passion. But following his hunch he chooses to blog.

But soon after the launch of his blog he met with a tragic accident and was bedridden for seven months. He did not give up on his passion and updated his blog from a hospital bed.

He is not the owner of a blog, but a website MouthShut.com. He obtained his bachelor’s science degree from the State University of New York at Binghamton and launched his website in 2000.

The website is a famous portal for consumer research and web services. He stays in New York and 2012 he was included in the list one of the most successful Indian Entrepreneurs by Time magazine.

In the list of famous bloggers in India Sharda Sharma is the first woman to compete with men. Before launching her blog Your Story the entrepreneur has successfully worked as Assistant Vice President of CNBC TV18.

The blog is unique from all other blogs as it has a key focus on startups and entrepreneurial related stories. The digital platform after its launch in 2008 has successfully published 60,000 stories about promising entrepreneurs.

She has hired a team of 5-6 bloggers in Banglore who focus on highlighting the best entrepreneur in their fields.

Her blog has a whopping 3.6 million views every month and has a global ranking of 9,805 and an Indian ranking of 639.

It is believed that a famous blogger earns $30,000 (per month) through Adsense.

He broke the myth that blogging is the field in which only youngsters can shine. The 56-year blogger is an exception in the blogging realm.

He launched his blog TheWindowsClub.com in the year 2009. The blog guides amateurs in fixing their windows bugs and operating system in a simple manner.

He then expanded his blog service and started offering Windows Tweaker and the Fix Win Windows repair tool which is freeware software offered by Windows. His initiative was successful and the blog now offers more than 80 freeware software and is considered to be the largest online resource for free software.

Are you thinking of buying a new mobile phone and are confused about which one to buy in your budget? Or are you not sure about your favorite mobile’s features or want to compare it with some other model?

All your problems related to mobile research will be easily solved by this blog. Famous blogger Varun Krishnan gives you the best reviews and comparisons about the latest mobile phones launched in the market.

His blog is estimated to have 1.8 million viewers/visitors every month. The site has a global ranking of 19,756 and 1,973 in Indian ranking.

Indian blogger and owner of the most famous mobile phone blog FoneArena have an estimated income of $22,000 per month.

The Rajnikanth of Top Bloggers in India is an expert in programming. His blog is followed by people who love programming and all the latest web development can be found on his blog.

He is basically from Chennai, India, but is currently living in the U.S. He launched his blog  9Lessons.info in the year 2009. The blog provides codes for Website Designing like AJAX, PHP, and many other website designing tools.

Top Bloggers in India have ranked IT geek Arun Prabhudesai in the seventh position. Before starting his successful blogging career, he worked in the IT industry for more than 10 years starting from 1996.

He launched his blog Trak. On 1st May 2007 after he went to the U.S.A. The blog highlights the Indian entrepreneurs and startups with an Indian twist. It sometimes also highlights and focus on Technology and Web-related topics.

He is not only a blogger but also a successful blogger with 1 million subscribers to his tech channel. His blog has an income of $15,000 per month.

His Social Media Handles are

The website has 63,000 viewers visiting their website daily and has a global ranking of 26,386. The site is quite popular in the U.S and European countries for their honest reviews about Apple products.

The blogger is the master of all niches. Launched in the year 2009 his blog savedelete.com covers all the topics relevant to fashion, technology, health, travel, and blogging.

He is a famous blogger from Jaipur who is passionate about the latest technology trends. He is a gym enthusiast himself and writes about health-related latest topics on his blog.

He is a mechanical engineer himself and provides valuable tech-related tips on his blog. Apart from this, he gives many tips about the latest software in the market and comparison with the rest.

He believes that people are confused and afraid of the financial market in the world. They are generally manipulated by the people who are related to the finance world to earn good profits for themselves.

He demystifies all your confusion through his blog JagoInvestor related to the financial sector. He has been guiding on his blog about retirement plans, Systematic Investment Plan (Sip)  and best policies in which we can invest.

Financial management and independence is our basic right and if managed properly even a small amount can turn into a significant sum in the future.

His website ranks 1,01,434 on the google ranking and is visited by 16,000 viewers daily to understand the investment sector. He also gives an insight into the Mutual Fund sector and gives you suggestions about the best fund in which investments can be made.

Don’t forget to visit the blog of one of the Top Bloggers in India to get a better insight into financial management.

Famous Indian women travel blogger who quit her IT job in 2011 to pursue her dream of traveling around the globe. She is a famous vegan, storyteller, solo traveler, and environmentalist. She is an inspiration for many women around the world to follow their passion and live life on her terms.

She launched her blog shooting star in the year 2012 and 2013 she sold most of her belongings and has been living a nomadic life ever since. Through her blogs, she motivates to step out of their comfort zones and explore the earth and its natural beauty.

Through her journey she has lived with many indigenous tribes of the world and people can see their lifestyle and traditions through her blog.

Her Social Media Handles are

Blogging is quite a good alternative for your daily job. Get inspired by these bloggers who quit their job and followed their passion and changed it into a stable source of income.

Blogging is quite popular in India nowadays and we hope you can select your niche and start a successful blog.

Top Freelance Websites to Work from Home – Get $1000 Easily