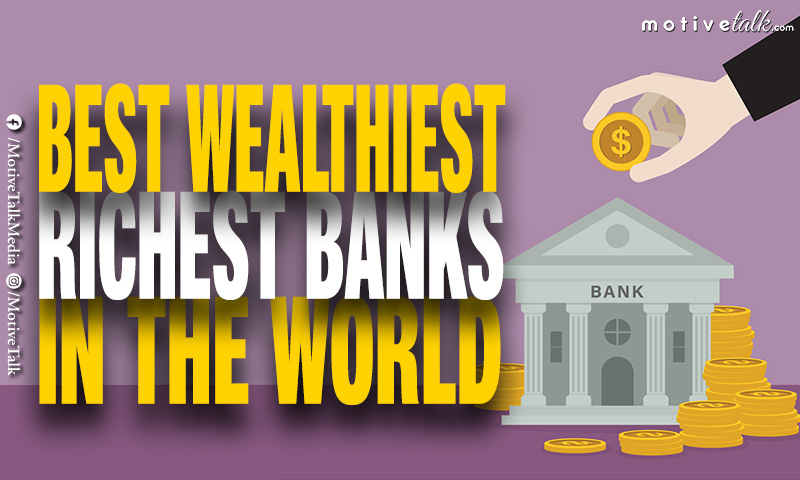 Are you curious to know the top Wealthiest or Richest Banks in the World? Then the answer is in this blog post!

The big companies, businesses, or individuals are generally the customers of the banks other than them few types of institutional clients are also customers of banks.

There are a lot of banks existing in the world. There are small banks with fewer assets and wealth or there are also rich and large banks with a good amount of wealth and assets.

However, the actual definition of a commercial bank has changed over time.

But now the main work of commercial banks is to cater to the needs of their customers which include large or small businesses, individuals from different professions, or other types of institutions, and the banks offer services like account opening, wealth management credits, or loans, money exchange, etc.

We will make is the list with the help of Companies Market Cap, and Investo Pedia.

As discussed before, banks are very important financial institutions and they have a very vital role to play in the global market.

There are many banks present in the world, some are small and some are large in terms of assets or any other characteristics.

Therefore, here is a list of the 11 Richest or Biggest Banks in the world. They are as follows:-

The main headquarters of Citibank is situated in New York City. This bank has branches in more than 40 countries including India.

As Of June 2021,  Citibank Is said to be the eleventh richest bank in the world. Basically, in the year 1998 Citicorp collaborated with a travelers group and as result, it formed an investment banking company named Citigroup Inc.

This bank was started as an organization to cater to the needs of the farming industry but later it grew over time. The Citi Agricole bank is considered the biggest financial institution in the world seen in the history of banking institutions.

The Credit Agricole banking group increased its services in the year 1990 and became a full-time banking service providing company on an international level.

The Credit Agricole Financial institution has its total assets in Billions which is $2386 billion.

9. The Bank of America Corporation

The Bank of America is the 9th richest bank in the world. In the year 1998, the organization National Bank conquered BankAmerica which gave rise to the formation of Bank of America.

The result of the following concertation or this purchase was the establishment of Bank of America. Currently, Bank of America is a multinational Investment Bank and a Financial banking company that provides services related to finance.

The Bank of America is also awarded the title of second Richest bank in the United States of America. Initially, this bank was formed in San Francisco, California but now its headquarters are situated in Charlotte, North Carolina.

The bank provides a wide range of financial products and services to businesses, big and small companies, and other types of institutions along with which it also provides usual banking services and credits to individuals.

Maybe You Also Like: Richest Rockstar In The World

BNP Paribas S.A is an international banking Organisation that has its headquarters in France. This bank was established in the year 1848 as a French national bank.

Since then the banking group has experienced a variety of changes especially after forming BNP Paribas S.A by collaborating with Banque Nationale de Paris and Paribas in the year 2000.

The total assets of BNP Paribas S.A are $2946 Billion.

JP Morgan Chase and Co bank are also considered a Financial services holding company. As per Magnify Money 2021,  JP Morgan Chase Bank is said to be the seventh richest bank in the world.

JP Morgan Chase Bank headquarters are situated in New York City, New York. The total assets of JP Morgan Chase and Co. are $2.68 Trillion which makes it 7th the richest bank in the world.

HSBC Holdings is a British Investment Bank with Financial Service providing company that has been recognized as a multinational institution.

This bank was established in British Hong Kong when the Hong Kong and Shanghai Banking corporation were being merged and formed this banking group.

The institution was established in London, England in 1991. The full legal name of this institution was considered to be very long, that is the reason why the institution’s name was being changed and it was named HSBC Holdings which is its present name.

This banking institution is the oldest institution that has undergone a great amount of modernization.

Today everybody is aware of HSBC Holdings because the institution has put an effect on the global financial markets by offering great Financial deals and services to people.

The total assets of HSBC Holdings company are $ 2.71 Trillion

4. The Bank of China

So basically, the Bank of China is the parent company of BOC associated with administration and management.

However, these two institutions are legally separated and work independently. But these two banking institutions do discuss matters like Insurance marketing, and securities services offered to their customers. The Bank of China has a total amount of assets of $ 3.27 trillion.

3. The Agricultural Bank of China

This is the 3rd largest banking institution in the world. With a total amount of assets of $3.57 trillion, The Agricultural Bank of China is the richest bank in the world.

This bank is also popularly known as ABC or AgBank. This bank is a member of the People’s Republic of China. AgBank has its headquarters in the Dongcheng District of Beijing.

The Agricultural Bank of China is basically a financial service providing institution in mainland China where it offers domestic business products and along with it also offers corporate and personal financial services, treasury operations, and wealth management.

The bank offers a variety of services in countries like Hong Kong, Dubai, Sydney, Singapore, New York, London, and Tokyo.

The China Construction Bank Corporation is the second wealthiest bank in the world.

The headquarters of this super-rich and wealthy banking institution is located in Beijing, China. The bank provides a wide range of financial products and services from personal banking to individuals and corporate accounts.

China Construction Bank provides its services in more than thirty countries and regions around the world.

The bank offers services such as Investment banking, help in financing, life insurance, wealth management, asset management, and pension plans. The China Construction Bank Corporation has a total amount of assets of $ 3.65 trillion.

1. Industrial and Commercial Bank of China

As of 2021, The Industrial and Commercial Bank of China is said to be the richest bank in the world.

The headquarters of this bank is situated in Beijing, China.

Conclusion Richest Banks in the World

Banks are generally Financial institutions that provide financial products and services which include wealth management, asset management, insurance services, pension plans, credits and debit cards, and Investment services to small and large businesses, companies, individuals, and all types of institutions.

The article showed and explained briefly the 11 richest banks in the world according to ascending order.

Through this article, it has been observed that the richest bank in the world is the Industrial and Commercial Bank of China with a total amount of assets of $ 4.32 trillion.

Top Freelance Websites to Work from Home – Get $1000 Easily