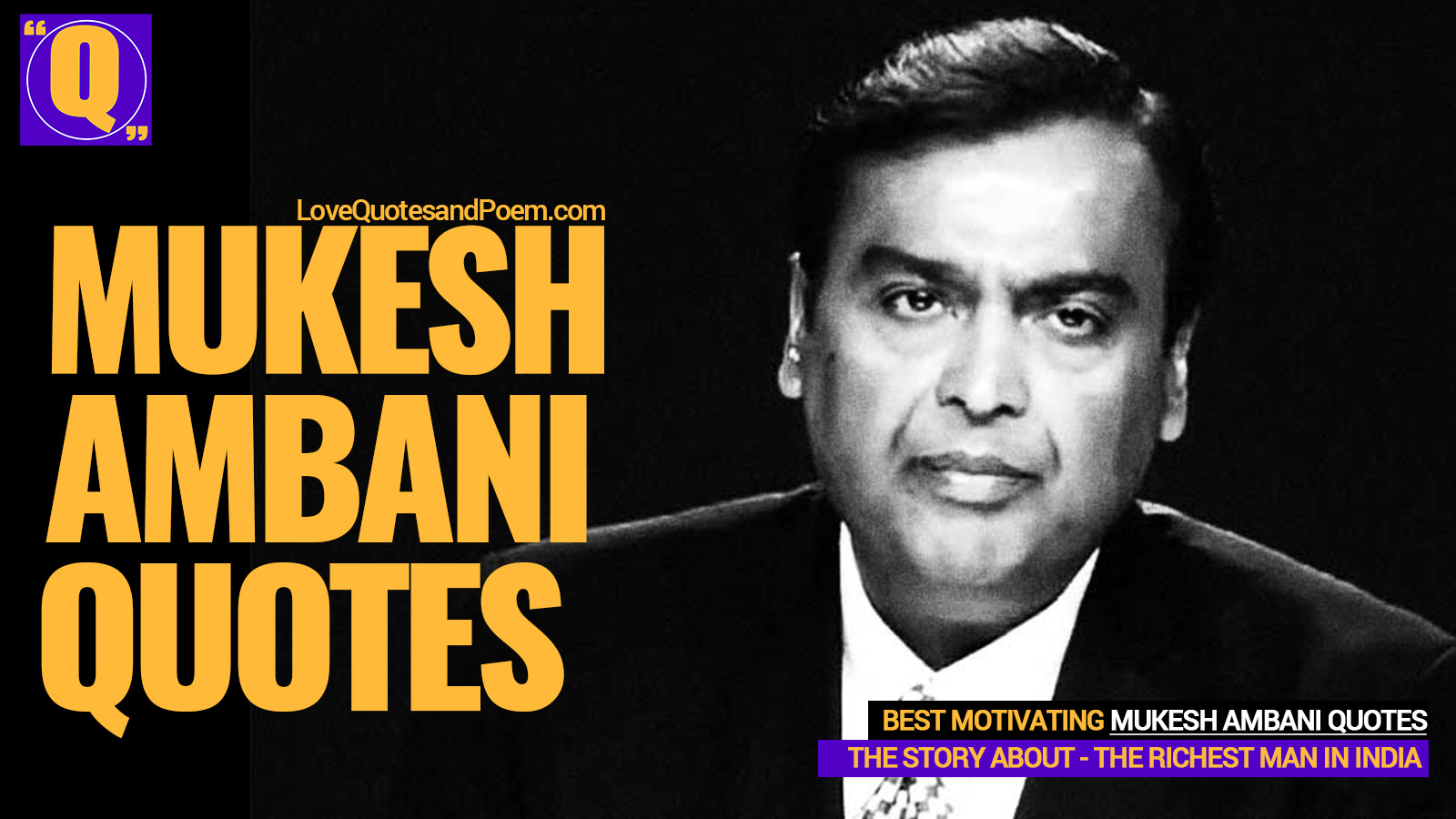 Mukesh Ambani is an Indian billionaire Businessman and he is the richest man in Asia. This blog is about inspiring Mukesh Ambani Quotes and a short biography of Mukesh Ambani!

Mukesh Ambani Birth: Born on 19 April 1957 to business tycoon Dhirubhai Ambani and Kokilaben Ambani, Mukesh Ambani is a name for whom no words are required for introduction.

Mukesh Ambani is an outstanding Business Tycoon. He is an engineer and the largest shareholder of Reliance, a company that he inherited from his father.

According to a survey done by Forbes, he is the wealthiest man in India and ranks on the thirteenth position globally.

He has three more siblings, brother Anil Ambani and two sisters Nina Kothari and Dipti Salgaocar. He married Nita Ambani in 1985 and is blessed with 2 sons Anant and Akash and a beautiful daughter Isha.

At the time of his birth, his parents were staying in Yemen and they shifted back to India in 1958.

His father after shifting started the business of spices and trade in which he was quite successful. Mukesh joined his family business and later expanded it to various other fields like telecommunications, refining, and petrochemicals, retails, and many other services.

The Ambani family is also famous for its extravagant marriages and charity programs. They have established their company name globally and is considered in the list of top most companies both in National and International grounds.

After the demise of his father Dhirubhai Ambani on 6, July 1992 the two brothers legally split the company.

After the split, Mr. Mukesh Ambani got the rights for Reliance Industries Limited and Indian Petrochemical Corporation.

After the split, the real journey of Mukesh Ambani began whereby he expanded his company to establish the country’s largest petroleum refinery in Jamnagar. The refinery can produce 6,60,000 per day and power generated infrastructure.

He also expanded his business towards the retail market and opened Reliance Malls all over the nation. Their brand Reliance Fresh takes an initiative to provide organic and fresh vegetables to its customers at a reasonable price.

He did not make all these accomplishments in one day but it was a lifelong journey started by his father and he is still following the path lead by his father. He has got full support from his family which is his life pillar. His children have also now joined his business and are learning and working under him. They are also bringing new changes to the company based on the trends of their generation and the future of Reliance is in safe hands.

27 Inspiring Mukesh Ambani Quotes – That Will Boost Your Confidence

“You have to manage money. Particularly with market economies. You may have a great product, but if your bottom line bustm then that’s it.” ― Mukesh Ambani Quotes

“I don’t think that ambition should not be in the dictionary of entrepreneurs. But our ambition should be realistic. You have to realise that you can’t do everything.” ― Mukesh Ambani

“I have turned into a big nature fan as well… I can afford it more today. These childhood influences have shaped me into what I am today.” ― Mukesh Ambani 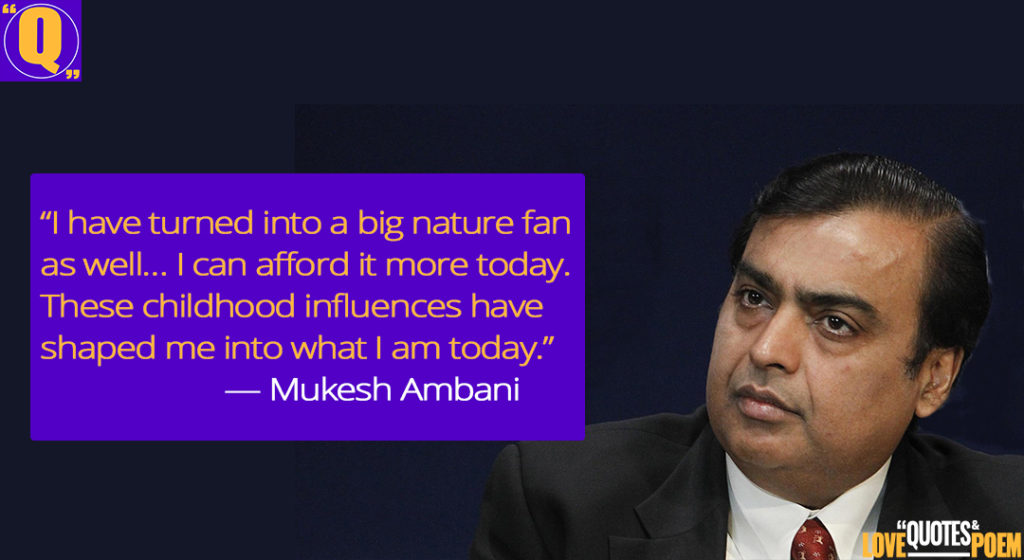 “Relationships and trust. This is the bedrock of life.” ― Mukesh Ambani

“Today I see a billion people as a billion potential consumers, an opportunity to generate value for them and to make a return for myself.” ― Mukesh Ambani Quotes

“I think that our fundamental belief is that for us growth is a way of life and we have to grow at all times.” ― Mukesh Ambani 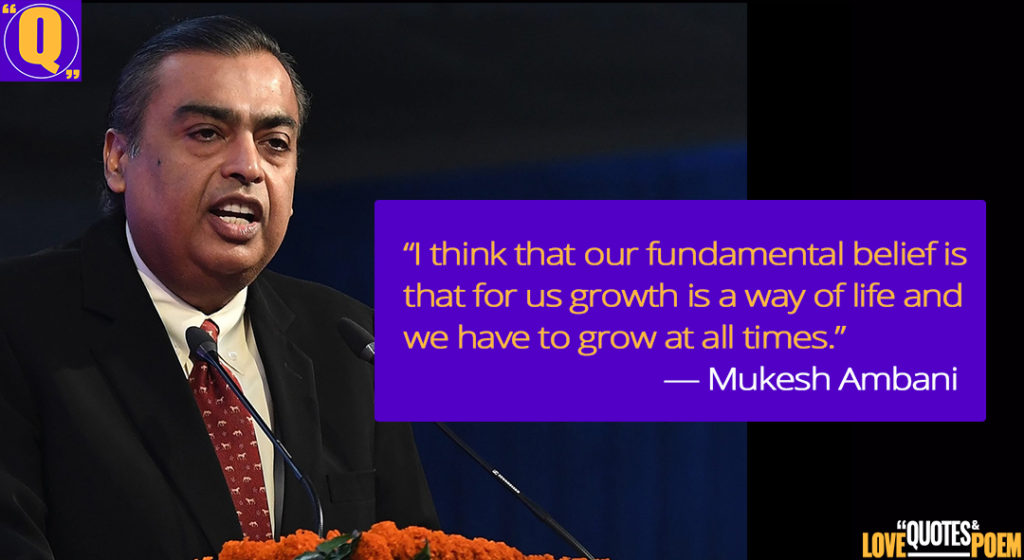 “It is important to achieve our goals, but not at any cost.” ― Mukesh Ambani

“Mahatma Gandhi’s dream of self-reliance can be attained by making use of Internet and technology.” ― Mukesh Ambani Quotes

“I personally think that money can do very little. And this has been my experience all across.” ― Mukesh Ambani 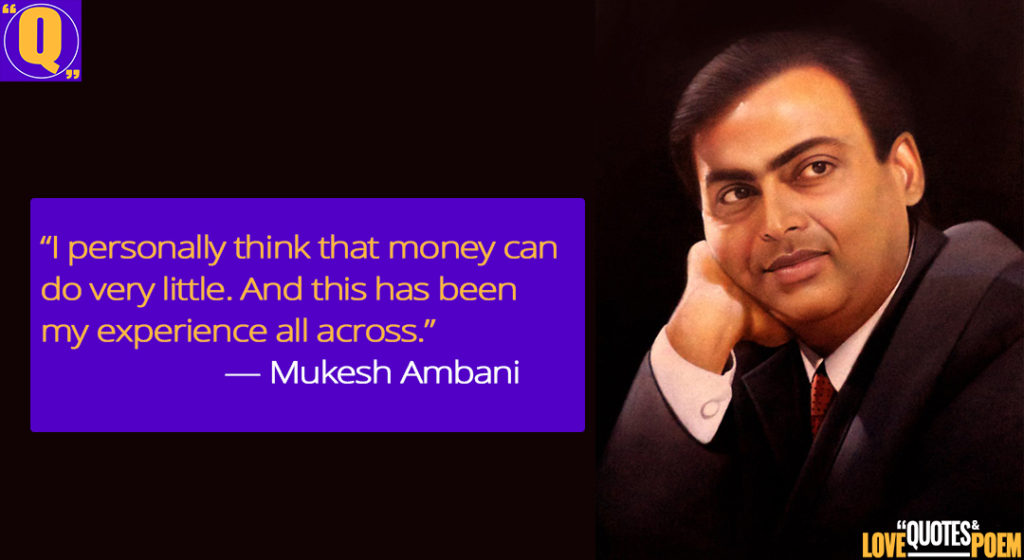 “Any business that has the soul purpose of making money is not worth doing.” ― Mukesh Ambani

“It is important to remember, there are no overnight successes. You will need to be dedicated, single-minded, and there is no substitute to hard work.” ― Mukesh Ambani Quotes 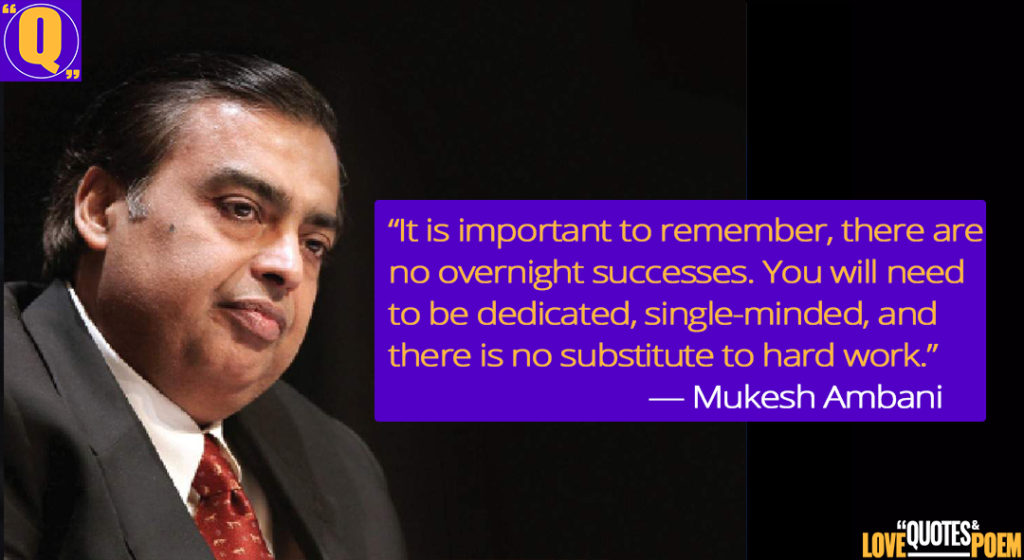 “My big advantage was to have my father accept me as first-generation.” ― Mukesh Ambani

“Broadband and digital services will no longer be a luxury item – a scarce commodity – to be rationed amongst the privileged few.” ― Mukesh Ambani Quotes “The Treaty of India is that all our billion people count and they have aspirations.” ― Mukesh Ambani

“People first want to spend money on food — that is common across the world. The second, in India, is education. In many parts of the world, it comes way down the list of priorities. So, there is a huge opportunity.” ― Mukesh Ambani Quotes

“You have to manage money. Particularly with market economies. You may have a great product, but if your bottom line goes bust, then that’s it.” ― Mukesh Ambani “We are now investing in each of our businesses to achieve substantial earnings growth in the future and create further value for millions of our shareholders.” ― Mukesh Ambani

“Fill your years and minds with melodies of optimism.” ― Mukesh Ambani

“I personally think that money can do very little. And this has been my experience all across.” ― Mukesh Ambani

“In the journey of an entrepreneur, the most important thing is self-belief and the ability to convert that belief into reality.”
― Mukesh Ambani Quotes

“I think our fundamental belief is that for us growth is a way of life and we have to grow at all times.”
― Mukesh Ambani

“Everybody has equal opportunity, and I think that is true for everything.”
― Top Mukesh Ambani

“If there are some losses that you take, then we’re all big boys – we shouldn’t be crying.”
― Mukesh Ambani Quotes

“I am a big believer that technology shapes mankind.”
― Top Mukesh Ambani

Mukesh Ambani’s hard work, strong business sense, and the focused view have taken the Reliance Group to immeasurable heights. They have now ventured in many other fields like the Indian Premier League where they own a team Mumbai Indians.

They are also credited for starting a football league in India, known as Indian Super League. The Ambani family resides in an expensive building in Mumbai named Antilia which has as an estimated net worth of $ 1 billion.

I guess all Mukesh Ambani Quotes will inspire you for sure.

Best Ratan Tata Quotes – That Will Change Your Views