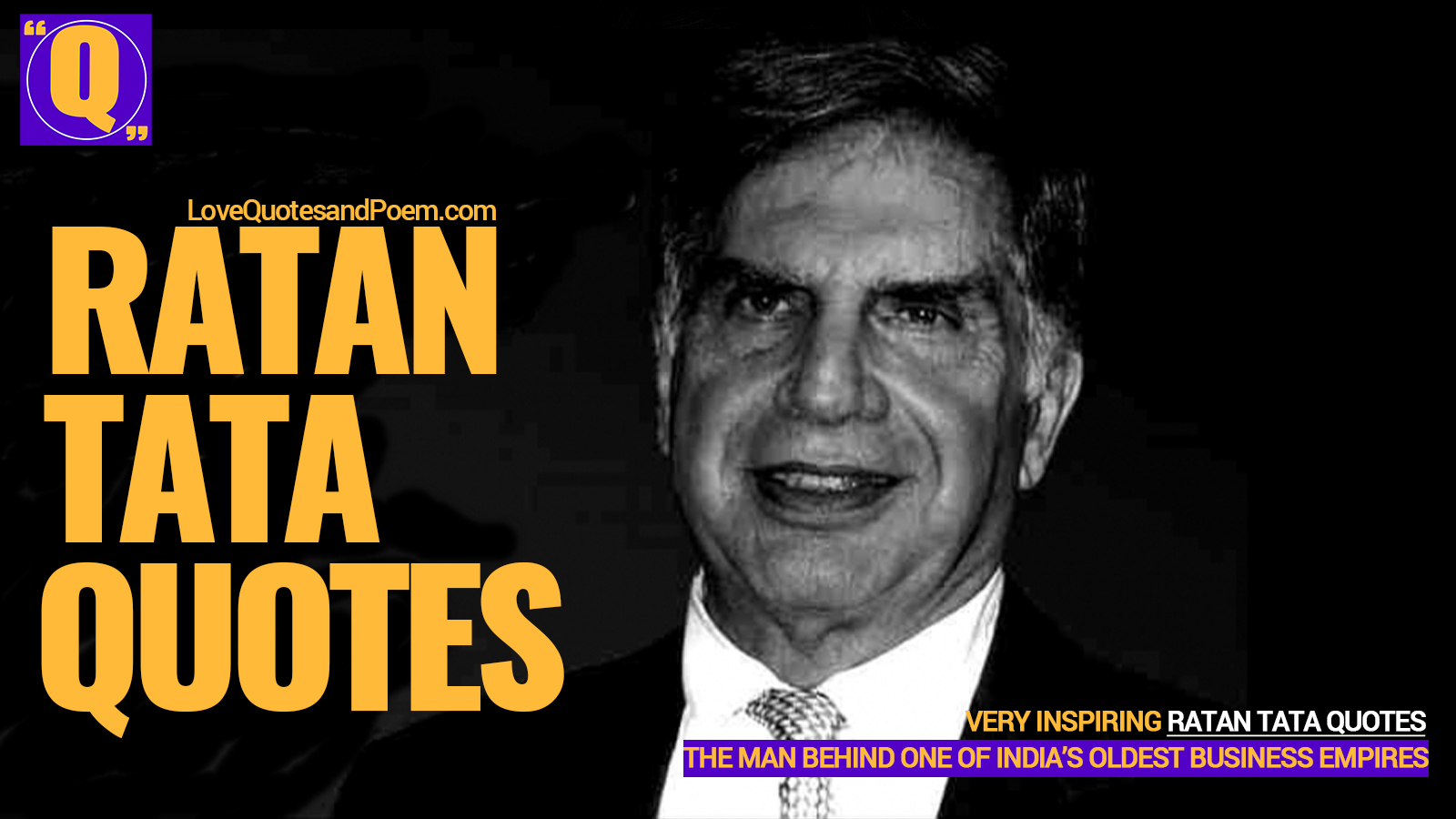 Tata the big name of the business industry. So here we will discuss the Ratan Tata Quotes and his short Biography. So further do, let’s start ;

Ratan Tata’s Birth: On 28, December 1937 Naval Tata and Sonoo were blessed with a baby boy in Bombay. The boy was named Ratan Naval Tata,ex-chairman of the conglomerate TATA Group. He has a stepbrother, Noel Tata from his father’s second marriage. Ratan Tata belongs to the famous Tata family which is known for its industries and philanthropy.

He has done B.Arch from Cornell University, New York, and after completing his education he came back to India and joined his family business. He was made the chairman of the National Radio and Electronics Co. in 1971 under the Tata Group. His uncle J.R.D Tata appointed him the chairman of the Tata Group in 1991 after seeing his potential which could take the company to new heights. He didn’t disappoint his uncle and under his leadership, the company expanded gradually and aimed at globalizing the business.

It is noted that during his 21-year tenure as the chairman of the Tata Group the revenues have grown 40 times and profit by 50%. In the first step to globalizing the company, the company acquired Tetley Tea a London-based company in 2000 at the cost of $431.3 million. Other acquisitions were like South Korea’s Daewoo Motors for $102 million and Corus Group for $11.3 billion. The latter was the largest acquisition made by an Indian company on a global level as in 2007.

The next largest acquisition was of Land Rover and Jaguar for $2.3 billion from Ford Motor Company. He is also noted for launching the NANO car which costs approximately 1 Lakh Indian rupee and was commonly called the “People’s Car” because of its affordable price.

Mr. Tata is a strong supporter and apostle of education, medicine, and rural development. He is a noted Indian philanthropist and is working towards the development of the needy and poor people through his charitable trust of whom he is the head. He is the head of MIT Tata Center of Technology and Design which is concerned with the challenges of resource-constrained communities and assists them with the required help.

31 Motivating Ratan Tata Quotes – That Will, Change Your Views

“Young entrepreneurs will make a difference in the Indian ecosystem.” ― Ratan Tata

“IT and the entire communications business clearly have the greatest potential for growth. But if you’re talking about sheer size, the steel and auto industries will remain at the top.” ― Ratan Tata Quotes “The day I am not able to fly will be a sad day for me.” ― Ratan Tata Quotes

“I have two or three cars that I like, but today, Ferrari would be the best car I have driven in terms of being an impressive car.” ― Ratan Tata

“I have always been very confident and very upbeat about the future potential of India. I think it is a great country with great potential.” ― Ratan Tata “I would say that one of the things I wish I could do differently would be to be more outgoing.” ― Ratan Tata

“I don’t believe in taking right decisions. I take decisions and then make them right.” ― Ratan Tata

“Ups and downs in life are very important to keep us going, because a straight line even in an ECG means we are not alive.” ― Ratan Tata Quotes 9 Motivating Ratan Tata Quotes Are Above

“Power and wealth are not two of my main stakes.” ― Ratan Tata

“What I would like to do is to leave behind a sustainable entity of a set of companies that operate in an exemplary manner in terms of ethics, values and continue what our ancestors left behind.” ― Ratan Tata

“I may have hurt some people along the way, but I would like to be seen as somebody who has done his best to do the right thing for any situation and not compromised.” ― Ratan Tata Quotes “Business need to go beyond the interest of their companies to the communities they serve.” ― Ratan Tata

“Britain needs a real push. It needs nationalism. The sort of spirit that comes during a war. It needs people really to want to see the UK sitting again, maybe not as a colonial power, but as an economic power.” ― Ratan Tata Quotes “At Tatas, we believe that if we are not among the top three in an industry, we should look seriously at what it would take to become one of the top three players. Or think about exiting the industry.” ― Ratan Tata Quotes

“The strong live and the weak die. There is some bloodshed, and out of it emerges a much leaner industry, which tends to survive.” ― Ratan Tata “Power and wealth are not two of my main stakes.” ― Ratan Tata

“There are many things that, if I have to relive, maybe I will do it another way. But I would not like to look back and think what I have not been able to.” ― Ratan Tata

“I have been constantly telling people to encourage people, to question the unquestioned and not to be ashamed to bring up new ideas, new processes to get things done.” ― Ratan Tata “Deal with crisis in such a way that you can hold your head high and sleep well at night.” ― Ratan Tata Quotes

“I’ve often felt that the Indian Tiger has not been unleashed.” ― Ratan Tata

“India needs to come out of its socialist pattern of doing things on a rationing basis.” ― Ratan Tata Quotes

“People still believe what they read is necessarily the truth.” ― Ratan Tata

“I think there are many honest businessmen.” ― Ratan Tata Quotes

“There’s a lot of interest in Nano outside India.” ― Ratan Tata

“Challenges need to be given to an organization.” ― Ratan Tata

“Take the stones people throw at you. and use them to build a monument.” ― Ratan Tata Quotes

Ratan Tata is known for his business ethos and altruism. He is humanistic and after he retired from the conglomerate he is working ahead of the various charitable trust which is working towards the betterment of the lower-class people. For his contribution towards his motherland, he has been awarded Padma Vibhushan in 2008 and Padma Bhushan in 2000.

I hope these inspiring Ratan Tata Quotes are motivating you.