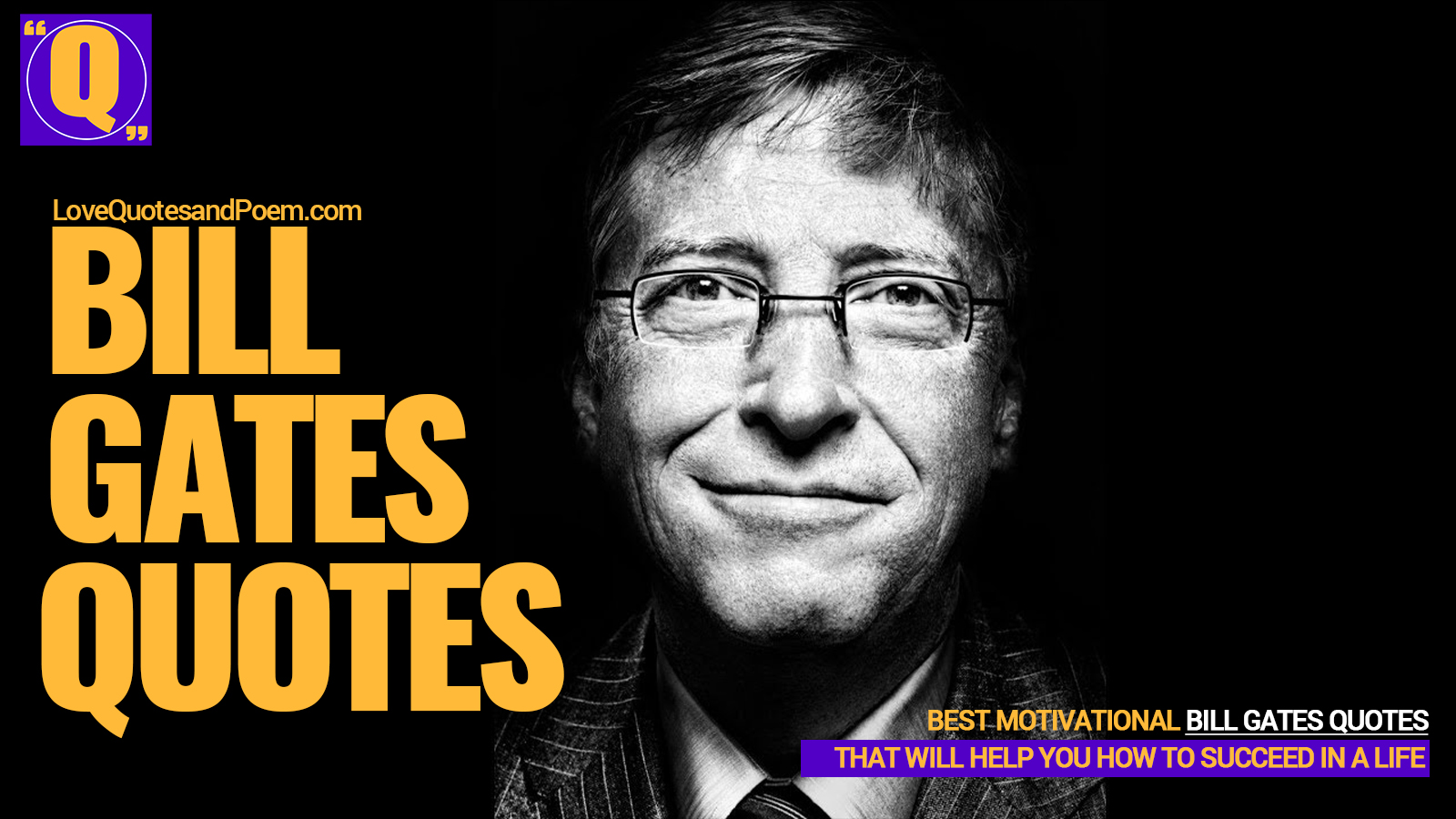 Bill Gates the famous personality and co-founder of Microsoft. In this blog post, you can get the Most Inspiring and Motivational Bill Gates Quotes.

A software developer, business tycoon, philanthropist and co-founder of Microsoft, William Henry Gates III  is a name that is bound of no introduction. Bill Gates was born on 28th, October 1955, in  Seattle, Washington. His father Bill Gates Sr. was an advocate by profession and his mother  Mary Maxwell Gates was an active member of a non-profit organization.

From a very young age, business and programming were two areas in which he took a keen interest. He wrote his first program at the age of 13. He founded Traf-O-Data, a traffic counting company in his high school days, and sold it to the local government.

In,1975 Bill Gates with his hometown friend Paul G. Allen started developing software for microcomputers while studying at Harvard University. They both, later on, established the company Microsoft. The company became a huge success when he successfully sold the operating system MS-Dos to IBM.

Gates is a gifted shrewd businessman he manipulated the large corporation to completely depend on them for software in running them. Even IBM’s competitor companies also turned to gates to design the software fo their computers operating system software.

Because of the success of Microsoft, Bill Gates became the ultimate King of the PC industry. He became a billionaire by 1986 as garnered a huge sum of money being the company’s largest individual shareholder. With the growth of Microsoft’s publicity Bill Gates became a public figure and was known for his charities.

In 1995 & 1996 the Internet bubble hit the market and Microsoft also started focusing on it. Bill gates developed an economical and consumer solution for the Internet and Windows CE was launched in the market. Windows was quite easy to understand and could be used to access the Internet. Windows was a huge success and is to date the most used Operating System software on the desktop and Laptop.

Bill Gates married Melinda Ann gates on 1st January 1994 on Hawaiian island and the family is blessed with three children. The family resides in Xanadu 2.0, on a side of a hill and facing Lake Washington. A catholic by religion his family believes in the customs of the Catholic Church and regularly visits the church.

Bill Gates is a philanthropist and is the founder of Bill & Melinda Gates Foundation which aims at global health and development. It also focuses on community and education causes and organizes many competitions throughout the globe to find and assist the true talent.

He is not only the richest man in the world but also lies in the top position of the greatest philanthropists because of the charities done by him.

“Computers are great because when you’re working with them you get immediate results that let you know if your program works. It’s feedback you don’t get from many other things” ― Bill Gates

“In terms of doing things I take a fairly scientific approach to why things happen and how they happen. I don’t know if there’s a god or not.” ― Top Bill Gates Quotes “If you give people tools, and they use their natural abilities and their curiosity, they will develop things in ways that will surprise you very much beyond what you might have expected.” ― Bill Gates Quotes

“Technology is just a tool. In terms of getting the kids working together and motivating them, the teacher is the most important.” ― Bill Gates Quotes “Like almost everyone who uses e-mail, I receive a ton of spam every day. Much of it offers to help me get out of debt or get rich quick. It would be funny if it weren’t so exciting.” ― Bill Gates

“Well, Steve Jobs, I think it’s more like we both had this rich neighbour named Xerox and I broke into his house to steal the TV set and found out that you had already stolen it.” ― Bill Gates

“The vision is about empowering workers, giving them all the information about what’s going on so they can do a lot more than they’ve done in the past.” ― Bill Gates Quotes Most Inspiring Bill Gates Quotes Are Below

“If you can’t make it good, at least make it look good.” ― Bill Gates

“If you think your teacher is tough, wait ’til you get a boss. He doesn’t have tenure.” ― Bill Gates

“Like my friend Warren Buffett, I feel particularly lucky to do something every day that I love to do. He calls it ‘tap-dancing to work.” ― Bill Gates Quotes “What’s amazing is, if young people understood how doing well in school makes the rest of their life so much interesting, they would be more motivated. It’s so far away in time that they can’t appreciate what it means for their whole life.” ― Bill Gates

“When a country has the skill and self-confidence to take action against its biggest problems, it makes outsiders eager to be a part of it.” ― Bill Gates “Exposure from a young age to the realities of the world is a super-big thing.” ― Bill Gates

“I really had a lot of dreams when I was a kid, and I think a great deal of that grew out of the fact that I had a chance to read a lot.” ― Bill Gates “Be nice to nerds. Chances are you’ll end up working for one.” ― Bill Gates

“I failed in some subjects in exam, but my friend passed in all. Now he is an engineer in Microsoft and I am the owner of Microsoft.” ― Bill Gates Quotes

“In this business, by the time you realize you are in trouble, it’s too late to save yourself. Unless you’re running scared all the time, you’re gone.” ― Bill Gates “Television is not real life. In real life, people actually have to leave the coffee shop and go to jobs.”
― Bill Gates Quotes

“It’s fine to celebrate success but it is more important to heed the lessons of failure.”
― Bill Gates

“Life is not fair, get used to it.”
― Top Bill Gate Quotes

“Before you were born, your parents weren’t as boring as they are now. They got that way from paying your bills, cleaning your clothes, and listening to you talk about how cool you thought you were. So before you save the rainforest from the parasites of your parent’s generation, try delousing the closet in your own room.”
― Bill Gates Quotes

“When you have money in hand only you forget who are you but when you do not have any money in your hand, the whole world forgets who you are. It’s life!”
― Bill Gates

“The general idea of the rich helping the poor, I think, is important.”
― Top Bill Gate Quotes

“As we look ahead into the next century, leaders will be those who empower others.”
― Bill Gates Quotes

“Don’t compare yourself with anyone in this world. If you do so, you are insulting yourself.”
― Bill Gates

“Your most unhappy customers are your greatest source of learning.”
― Top Bill Gate Quotes

All 31 Motivating Bill Gates Quotes Are Above.

Bill Gates is gifted with a practical and down-to-earth personality. His innovative thoughts give sparks to the new inventors to work hard and taste success. His quotes guide us all to live a simple, smarter and wiser life.

What is your favorite Bill Gates Quotes? Please comments below.