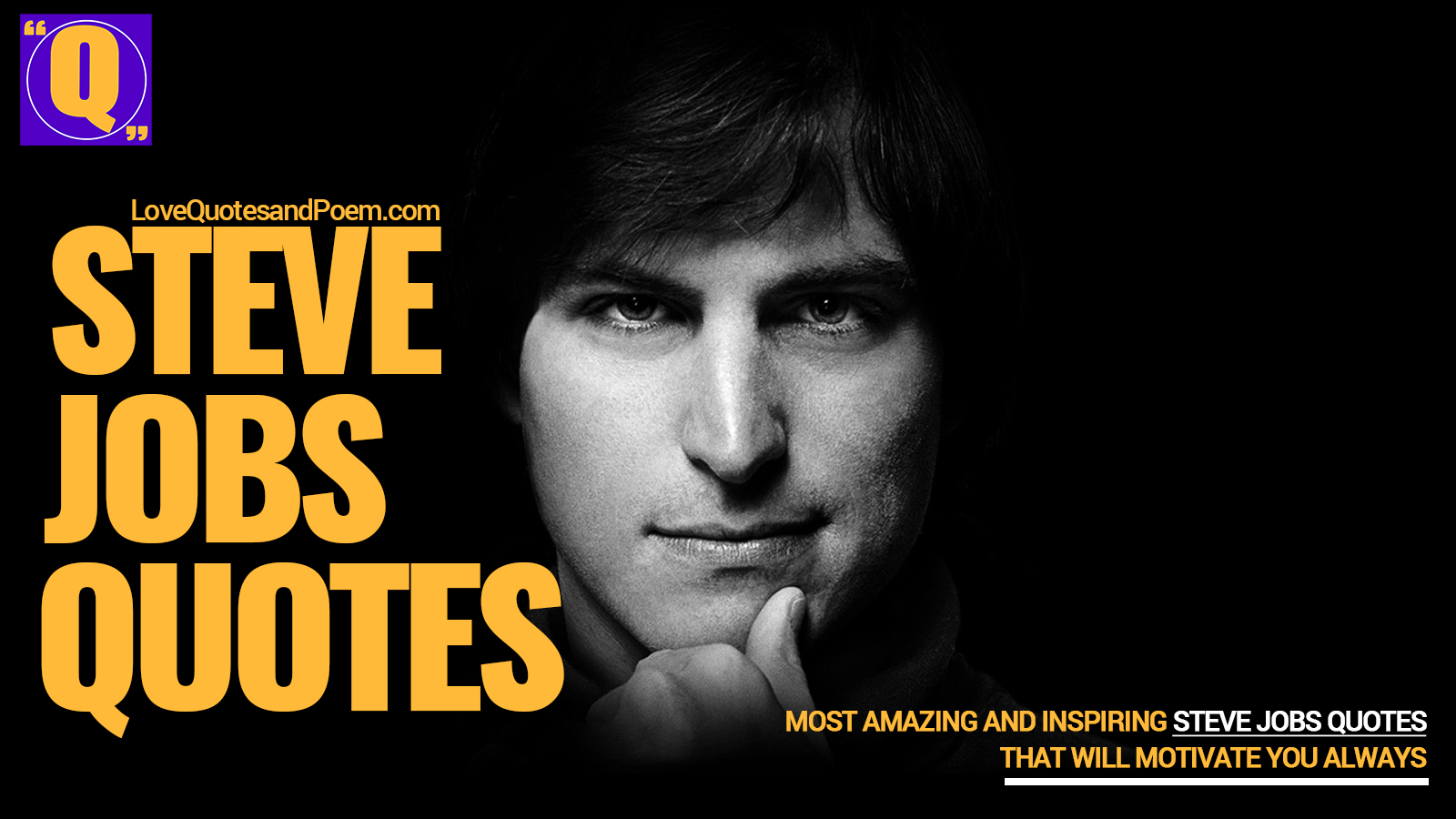 In this page, we will discuss about Most Inspiring Steve Jobs Quotes, that will always motivate you for sure.

Steve Jobs was born on Feb 24, 1955, in San Francisco, USA. The two university students, Joanne Schieble and John Jandali. They were both unmarried at the time, and jobs were given up for adoption. Later on, Steven was adopted by Paul and Clara, whom he always considered being his real parents. He lived with his adoptive family in Mountain View, within the area that would later become known as Silicon Valley.

Jobs father Paul is fascinating about electronics, and he encouraged him (Steve jobs) to experiment with new things with the electronics in their garage. This is the first base, to make an interest in electronics, gadgets, and design.

Steven’s shooling in California. And after high school, steven enrolled Reed College in Portland, Oregon. But due to lacking direction, he dropped out of college after six months. At college, he attended a calligraphy course which was too much fascinated him. And he loves typography.

In the year of 1974, Steve traveled with Daniel Kottke to India to search for spiritual enlightenment. In India, they stay an Ashram of Neem Karoli Baba in Kainchi. He and his friend stay a few months in India, during this time he became aware of Buddhist, and he also experimented with psychedelic drugs, in one interview, jobs said that these counter-culture experiences were instrumental in giving him a wider perspective on life and business.

In 1976, Jobs and Wozniak (another apple computer co-founder) invented the first Apple computer. In the beginning, Apple Computer was started Jobs’ family garage. This is the short and simple story about Steven Pual jobs or Steve Jobs. “Details matter, it’s worth waiting to get it right.” ― Steve Jobs

“Sometimes when you innovate, you make mistakes. It is best to admit them quickly, and get on with improving your other innovations.”
― Steve Jobs Quotes “Your time is limited, so don’t waste it living someone else’s life.”
― Steve Jobs

“Don’t let the noise of others’ opinions drown out your own inner voice.”
― Steve Jobs

“It’s really hard to design products by focus groups. A lot of times, people don’t know what they want until you show it to them.”
― Steve Jobs “My favorite things in life don’t cost any money. It’s really clear that the most precious resource we all have is time.”
― Steve Jobs Quotes

“The only way to do great work is to love what you do.”
― Steve Jobs “Innovation distinguishes between a leader and a follower.” – Steve Jobs

“The greatest thing is when you do put your heart and soul into something over an extended period of time, and it is worth it.”
– Steve Jobs 15 Most Inspiring Steve Jobs Quotes (Above)

“Remembering that you are going to die is the best way I know to avoid the trap of thinking you have something to lose. You are already naked. There is no reason not to follow your heart.” – Steve Jobs

“I’ve always been attracted to the more revolutionary changes. I don’t know why. Because they’re harder. They’re much more stressful emotionally. And you usually go through a period where everybody tells you that you’ve completely failed.”
– Steve Jobs

“Things don’t have to change the world to be important.” – Steve Jobs “Sometimes life hits you in the head with a brick. Don’t lose faith.”
– Steve Jobs

“Design is not just what it looks like and feels like. Design is how it works.”
– Steve Jobs Quotes

“You should never start a company with the goal of getting rich. Your goal should be making something you believe in and making a company that will last.” – Steve Jobs A man who has great Leadership quality, full dedication with their work, motivating people, very hard-working, inspiring everyone.

So if you are business-minded people or entrepreneurs. Then these Inspiring Steve Jobs Quotes will, of course, motivate you.  And if you are interested to read Steve Jobs biography, then the biography will boost up your confidence, mind setup as well.

I guess all Steve Jobs Quotes will motivating you for sure.