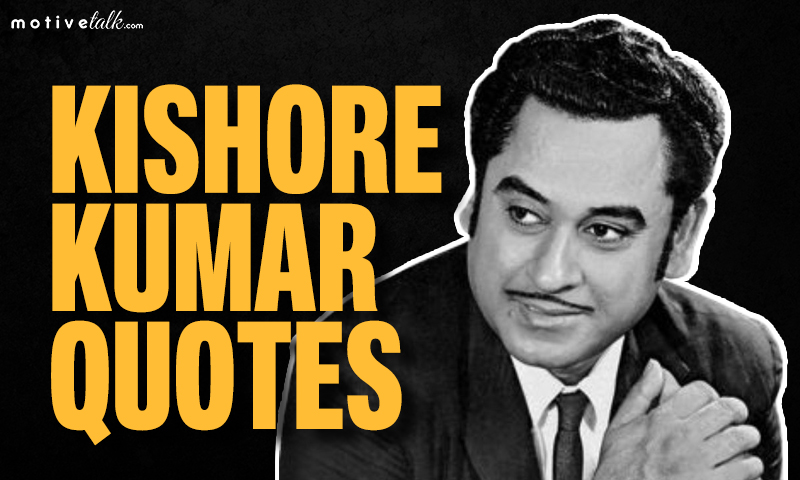 In that blog post, we will discuss about a short biography of the most versatile singer and actor of Indian Cinema History, Kishore Kumar as well as share some of Kishore Kumar Quotes and Dialogues.

Kishore Kumar was an Indian versatile personality who had a successful career as a singer, actor, producer, lyricist, scriptwriter, and many more.

He was a gifted soul who excelled in many fields and created timeless classics which we still enjoy to listen and watch.

His father Kunjalal Ganguly was a famous lawyer and his mother Gouri Devi was a homemaker from a wealthy background.

Together the couple was blessed with three sons and one daughter. Kishore was the youngest of all the siblings and was originally named Abhas Kumar Ganguly by his parents.

His elder brother Ashok Kumar established himself as a successful Bollywood actor. He was highly inspired by his Elder brother and decided to join the industries. He got himself a position as a singer to sing in the chorus in Bombay Talkies.

In his early days he never took his acting career seriously. His elder brother Ashok Kumar saw him as an actor material and got him roles in movies. But he was too focused on his singing career.

It was only the success of his movies like “Naukari” and “Ladki” he took his acting career seriously. From the period of 1955 and 1966 he acted in many successful movies as a successful hero.

He even tried his hand in producing movies and produced a timeless classic “Chalti Ka Naam Gadhi(1958)“ which was a huge success.

The movie starred all the three brothers with Madhubala as the lead actress who was romantically involved with Kishore Kumar.

His experimental duet song “Aake Seedhi Lagi Dil Pe”  for the movie Half-ticket is one of the most ticklish Bollywood songs to date. S.D Burman appreciated Kishore Kumar a lot in his early years and inspired him to develop his style instead of copying K.L Saigal.

He developed a yodeling singing style for himself which he earlier used for Dev Anand.

He was highly influenced by three people all his life Rabindranath Tagore, K.L Saigal, and Hollywood actor-singer Danny Kaye.

He hung their portraits in his home Gouri Kunj and he used to daily bow before them to pay his respect to them.

He married four times in his life and had two sons from his marriages. His first marriage with  Ruma Guha Thakurta with whom he had a son Amit Kumar ended in divorce in 1958.

His second marriage was with famous actress Madhubala who died due to heart disease. His third marriage with Yogeeta Bali also ended in a divorce.

He found his true love and his last wife  Leena Chandavarkar with whom he was married until his death. The couple was blessed with a boy named Sumit Kumar.

He was very famously known for his quote “No Money, No Work“. He used to throw tantrums at producers who refused to give him his dues and would take any measures to take out the money they owned him.

“Every place of the world is beautiful in the sight of love.” ― Top Kishore Kumar Quotes

“If you fail in your endeavor, never be disheartened. It’s up to you to get back on track. It’s your strength that makes you to move closer to your goals and dreams.” ― Kishore Kumar

“A supporting brother is of no use, your own child from your belly is of no use, finally only money is of use.” ― Top Kishore Kumar Quotes

“I’m mad, true. But only about one thing. Horror movies. I love spooks. They are a friendly fearsome lot. Very nice people, actually, if you get to know them. Not like these industry chaps out here.” ― Kishore Kumar Quotes

“Asha tells me until when will you hide, today I’ve read the language of your eyes.” ― Kishore Kumar

“Most of the things that we desire in life are expensive. But truth is that the things that really satisfy us are absolutely free: love, joy and laughter.” ― Kishore Kumar Quotes

“I hate my life as much as a mother loves her child.” ― Top Kishore Kumar Quotes

“Until a person becomes something in life … even his dear ones act as strangers.” ― Kishore Kumar Quotes

“They used to feed on cashew nuts during the days of the monarch, but now they don’t even get enough corn and wheat to eat.” ― Kishore Kumar

“A friend is the one who comes in when the whole world has gone out.” ― Top Kishore Kumar Quotes

“I’m incomplete without you, just like lentil soup without salt, like rice without lentil soup and Bengal without rice.” ― Kishore Kumar Quotes

“Every day is a new beginning. Every day gives opportunity to prove yourself better and better, to do something good and to prove your self-worth.” ― Kishore Kumar

“The difference between the poor and the rich is not only of the status but also of the heart.” ― Kishore Kumar Quotes

“Good business, rats. One can make money from them if one is enterprising.” ― Kishore Kumar

“The destiny of a child shines only with the tears of a mother.” ― Kishore Kumar Quotes

“Love is the name of a thing that teaches a person how to sacrifice.” ― Kishore Kumar

The great legend took his last breath on 13 October 1987 in his residence in Bombay. He never took formal training in singing but his work is a masterpiece of Indian Cinema. He experimented in many ways and gave us the best works which are a source of inspiration for many singers and actors.

We hope that his quotes inspire you to experiment with your dreams and become successful.

I hope you like all the Kishore Kumar Quotes!