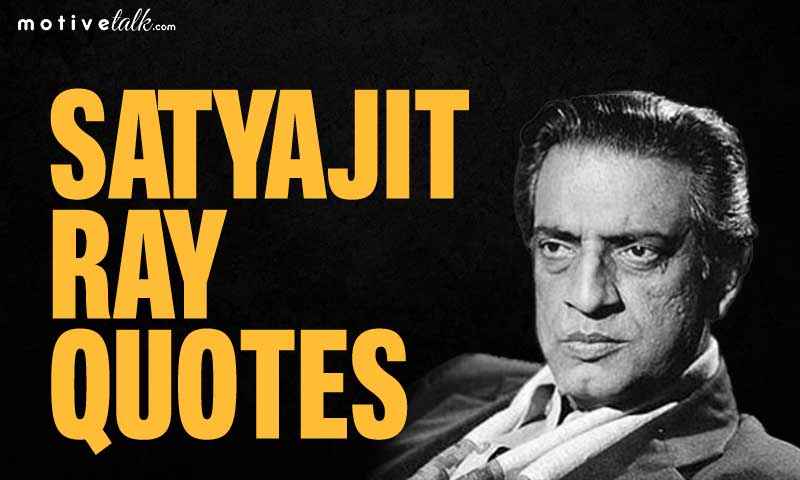 In that blog post, you know about a short biography of legend Indian filmmaker Satyajit Ray and some Satyajit Ray quotes.

Satyajit Ray was born on 2nd May 1921 in Calcutta, India. His family was largely associated with literature writings whose works are considered to be the masterpiece of Indian literature.

His father Sukumar Ray was a writer of Abol Tabol which were children’s books and his mother Suprabha Ray was a housewife.

He was only three years old when his father passed in 1923 and he was the only child in the family.

On his mother’s insistence, he attended Shantinektan, largely due to his respect and love for Rabindranath Tagore.

He never regretted his decision as he learned oriental art and his thinking cultivated under painters like Nandalal Bose and Benode Bihari Mukherjee.

In 1947, Ray founded the Calcutta Film Society along with his friend  Chidananda Dasgupta. Ray was highly influenced by foreign movies and seriously studied those movies when they were screened in his society. His American friends kept him well informed about the latest trending American movies which he not only enjoyed watching but also learned a lot from them.

In,1949, he tied the knot with his childhood sweetheart Bijoya Das who was also his first cousin. The couple was blessed with a boy Sandip Ray who is also a director by profession. Ray was highly influenced by Jean Renoir for whom he worked free when he was filming The River in Calcutta. Ray discussed his idea about Pather Panchali and was highly encouraged by him to follow his passion.

Ray decided to make his film based on classical literature Bengali Pather Panchali with an amateur cast and crew. The novel was based on the life of Apu and his family.

The movie took three years to complete due to a shortage of funds. In,1955 after taking a loan from West Bengal Government he was finally able to complete the movie and was acclaimed a movie of pure cinema.

His International career got a pace with his next movie  Aparajito which was a sequel to Apu’s further life journey.

The movie was his outstanding work which won him a Golden Lion at Venice Film Festival. The trilogy ended with Apur Sansar featuring Sharmila Tagore and Soumitra Chatterjee.

Some of his noted works are Charulata(1964), Devi(1960), Paras Pather(1957), and many more. He also revived his grandfather’s children magazine Sandesh which he edited till 1992 until he died. Let’s have a look at some of his quotes which greatly influence us to follow our passion.

“The director is the only person who knows what the film is about.” – Satyajit Ray Quotes

“Cinema’s characteristic forte is its ability to capture and communicate the intimacies of the human mind.” ― Satyajit Ray Quotes

“Ever since Two Daughters I’ve been composing my own music.” – Satyajit Ray Quotes

“At the age when Bengali youth almost inevitably writes poetry, I was listening to European classical music.” ― Satyajit Ray Quotes

“Somehow I feel that an ordinary person–the man in the street if you like – is a more challenging subject for exploration than people in the heroic mold. It is the half shades, the hardly audible notes that I want to capture and explore.” – Satyajit Ray Quotes

“I don’t understand these national awards, because half of those who sit in judgement over Indian films do not… possess the competence to evaluate a film correctly.” ― Satyajit Ray Quotes

“I was interested in both Western and Indian classical music.” – Satyajit Ray Quotes

“Particularly in the final stages I always find that I’m rushed. It’s dangerous when you’re rushed in the editing stage, most of my early films are flawed in the cutting.” ― Satyajit Ray Quotes

8 Satyajit Ray Quotes Are Above

“Dominus Omnium Magister. It means God is the master of all things.” ― Satyajit Ray Quotes

“I wouldn’t mind taking a rest for three or four months, but I have to keep on making films for the sake of my crew, who just wait for the next film because they’re not on a fixed salary.” – Satyajit Ray Quotes

“For a filmmaker, an Oscar is like a Nobel Prize, you know. So I am very happy… delighted. There is nothing more after this. I cannot hope to get anything more prestigious.” ― Satyajit Ray Quotes

“My cameraman and I devised a method, which we started using from my second film, which applies mainly to day scenes shot in the studio, where we used bounced light instead of direct light. We agreed with this thing of four or five shadows following the actors is dreadful.” – Satyajit Ray Quotes

“I had developed this habit of writing scenarios as a hobby. I would find out which stories had been sold to be made into films and I would write my own treatment and then compare it.” ― Satyajit Ray Quotes

“Well the Bombay film wasn’t always like how it is now. It did have a local industry. There were realistic films made on local scenes. But it gradually changed over the years.” – Satyajit Ray Quotes

“When a new character appears in your tale, you must describe his looks and clothes in some detail. If you don’t, your reader may imagine certain things on his own, which will probably not fit whatever you say later on.’ So” ― Satyajit Ray Quotes

“It was only after Pather Panchali had some success at home that I decided to do a second part. But I didn’t want to do the same kind of film again, so I made a musical.” – Satyajit Ray Quotes

“When I write an original story I write about people I know first-hand and situations I’m familiar with. I don’t write stories about the nineteenth century.” ― Satyajit Ray Quotes

“If the theme is simple, you can include a hundred details that create the illusion of actuality better.” – Satyajit Ray Quotes

“Last, but not least — in fact, this is most important — you need a happy ending. However, if you can create tragic situations and jerk a few tears before the happy ending, it will work much better.”
― Satyajit Ray Quotes

“Most of the top actors and actresses may be working in ten or twelve films at the same time, so they will give one director two hours and maybe shoot in Bombay in the morning and Madras in the evening. It happens.”
― Satyajit Ray

“When I’m shooting on location, you get ideas on the spot – new angles. You make not major changes but important modifications, that you can’t do on a set. I do that because you have to be economical.”
― Satyajit Ray Quotes

“I’ve made seventeen or eighteen films now, only two of which have been original screenplays, all the others have been based on short stories or novels, and I find the long short story ideal for adaptation.”
― Satyajit Ray Quotes

“My films play only in Bengal, and my audience is the educated middle class in the cities and small towns. They also play in Bombay, Madras and Delhi where there is a Bengali population.”
― Satyajit Ray

“There is a ban on Indian films in Pakistan, so that’s half of our market gone.”
― Satyajit Ray Quotes

“The conception of background music is changing. You use less and less of it these days.”
― Top Satyajit Ray Quotes

“Sometimes a director is making three films. Perhaps he is shooting a film in Madras and a film in Bombay and he can’t leave Madras as some shooting has to be done, so he directs by telephone. The shooting takes place. On schedule.”
― Satyajit Ray

“You cannot go beyond a certain limit in your expenditure if you want to bring back money from your local market, which is very small after Pakistan.”
― Satyajit Ray Quotes

“I think they quite like me when I work because I’m one of the safer directors to back, because even if my films don’t bring their costs in back home, once they’re shown outside of India they manage to cover the costs.”
― Satyajit Ray

“What is attempted in these film is of course a synthesis. But it can be seen by someone who has his feet in both cultures. Someone who will bring to bear on the film’s involvement and detachment in equal measure.”
― Satyajit Ray Quotes

“Bicycle Thief is a triumphant discovery of the fundamentals of cinema, and De Sica has openly acknowledged his debt to Chaplin.”
― Top Satyajit Ray Quotes

The great legend died on April 23, 1992, in Calcutta. During his lifetime he won 32 National Film Awards, Padma Bhushan in 1965, and India’s highest civilian award Bharat Ratan posthumously. He is the second person after Chaplin to receive a doctorate after Oxford University. In 1992 shortly before his death the Academy of Motion Pictures awarded him an honorary Oscar and remains the country’s best-known filmmaker internationally. He was a noted Internationally acclaimed director and has been included in the list both at the National and International levels. We hope that his quotes and works inspire all the new talents around the world.

I hope you like all the Satyajit Ray Quotes!

Motivational Grant Cardone Quotes That Will Change Your Life Forever