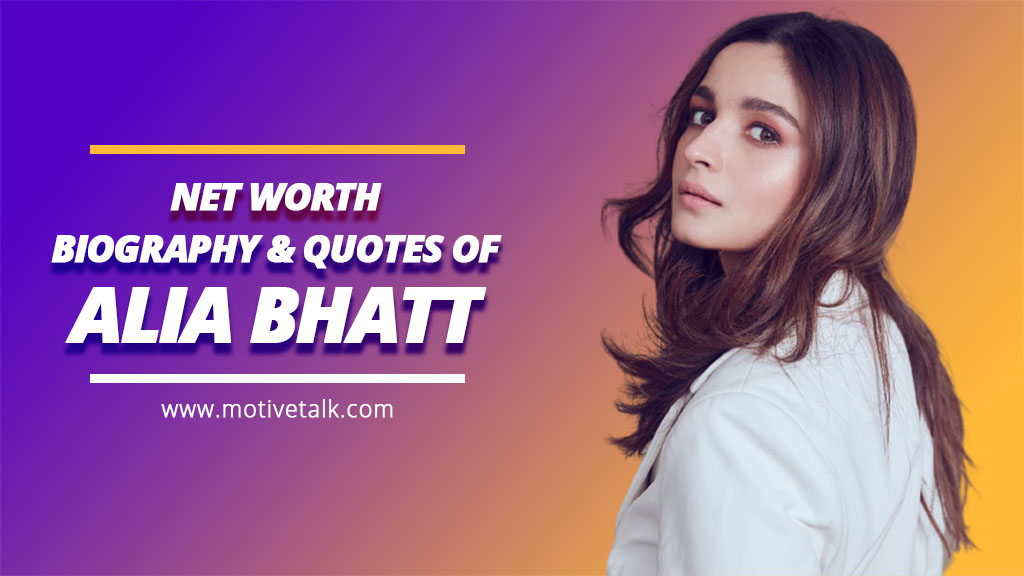 In this post, we will talk about Alia Bhatt’s Net Worth (21.7 Million USD), short Biography, Career, And Alia Bhatt Quotes. Without further ado, let’s start the topic;

Bhatt family is one of the well-known families of the Bollywood film fraternity with lots of talent coming from the family as actors and directors. The youngest one in this family is Alia Bhatt who is a talented actress and singer.

She is marked as one of the highest-paid actresses as of 2019 and also received many awards which include 4 Filmfare awards. Let’s see some more facts about this versatile and talented actress. Born as the youngest princess of Mahesh Bhatt and Soni Razdan, Alia was very cute in her childhood. She was very chubby in her childhood and hence her family and friends called her “Aloo” out of love. In her childhood, she made her debut in the thriller movie “Sangharsh” where she played the child role of Priety Zinta. She was born on 15th March 1993 in Mumbai. Alia owns British citizenship. Her father is Gujarati and her mother is Kashmiri pandit. She has an elder sister Shaheen and two half-siblings, Pooja Bhatt and Rahul Bhatt. Her cousins Emran Hashmi and Mohit Suri are also in Bollywood as actors and directors.

Alia Bhatt did her schooling at Jamnabai Narsee school. She didn’t go to college. She turned vegetarian in 2015. Some of her hobbies include cooking, singing, playing the piano, and many more. She has a tattoo “patakha” written on the back of her neck.

Alia has a sweet tooth as she loves desserts like Rasgulla, moong halwa very much. Her favorite actors in Bollywood are Shahrukh Khan, Govinda, and Ranbir Kapoor of course. In Bollywood, she likes Leonardo DiCaprio. Her favorite musician is A.R. Rehman and she loves cats a lot. She has been in many relationships since she was in class 6th. She recently broke up with her co-star, Siddharth Malhotra from her debut movie Student of the year. Now she is in a relationship with Ranbir Kapoor, whose breakup history is also very long. “For me, changing my physical appearance for a character is never a problem. If I have to look a certain way for a role, I just do it.” ― Alia Bhatt Quotes

“I’m almost a feminist and believe if a girl wants to do something, she should be able to do it in the same way that a man is able to, which is sometimes a problem in our country.” ― Alia Bhatt Quotes

“Smell is something that attracts me instantly. So if the guy smells nice, there is an instant attraction.” ― Alia Bhatt Quotes “I didn’t have any fixed goals when I joined the film industry. I don’t particularly feel ‘successful,’ but I am grateful that my career is going well.” ― Alia Bhatt Quotes

“I don’t know how to measure success. I have been fortunate that I got exciting films to do and work with talented directors who brought out the best in me.” ― Alia Bhatt

“My whole being and approach to work is shaped by Karan Johar. From him, I have learned that people should love to work with you, and you should give out warmth and energy to them.” ― Alia Bhatt “You just have to ensure that you make good films because audiences today have become picky and smart, and rightfully so.” ― Alia Bhatt

“I think the success that I have is due to hard work and destiny. It is important to stay grounded and not take things for granted.” ― Alia Bhatt Quotes

“I think your first gut feeling is the correct feeling.” ― Alia Bhatt

“Whenever I like a new song, I play it on loop and dance to it. That’s my therapy.” ― Alia Bhatt Quotes “I think each character is different for me, but I am a director’s actor. So if I get the right vision and right guidance from my director, I think sky is the limit for me.” ― Alia Bhatt Quotes

“It’s important that the director and actor have good chemistry, and not just the actors.” ― Alia Bhatt

“I’m here to be an actor who wants to be remembered for her roles and her films rather than her looks.” ― Alia Bhatt

“A romantic date for me is sitting in pajamas and being with a guy with whom I can be myself.” ― Alia Bhatt Quotes “I don’t find these technical things like flowers and chocolates romantic at all. I think Valentine’s Day makes no sense.” ― Alia Bhatt Quotes

“What makes my father different is the fact that he calls himself mad.” ― Alia Bhatt

“I will never wear something I’m not comfortable in, and if I do, you’ll see it in my face, and it’ll be a complete faux pas.” ― Alia Bhatt

“I would rather be stupid than pretend to be intelligent.” ― Alia Bhatt Quotes

“I am a very private person. I don’t like to talk about things until someone asks about them.” ― Alia Bhatt Quotes Career and Net worth (Lifestyle) Alia Bhatt debuted in the Bollywood industry with the blockbuster movie Student of the Year. She beat 400 approx girls to bag the role of Shanaya in this movie. She trained for 3 months and lost 15 kgs for this audition.

Alia did many hit movies after that like Highway, 2 states, Humpty Sharma ki Dulhaniya, Badrinath ki Dulhaniya. Due to her hit movies in 2014, she was noted as a top actress that year. Currently, she is working on Sadak 2 with her sister Pooja Bhatt, Aditya Roy Kapoor, and Sanjay Dutt.

This huge income comes to her for the movies she works upon, singing g and of course the endorsements. She loves to enjoy her lavish lifestyle most and has a huge collection of gowns, handbags, and cars. She has a big car collection which also adds up to her net worth. Some of them are listed below:

Public Image and the Singing Career Alia Bhatt also made her singing debut in the movie Highway when she sang “Sooha Saaha” which is a soul-soothing song. She also sang the unplugged version of “Samjhawan” in the movie Humpty Sharma ki Dulhania and then the famous song “Ik Kudi” in Udta Punjab with her co-star Diljit Dosanjh.

Alia Bhatt was featured in Forbes Asia 30 under 30 in 2017 and she was at 8th position in 2019. That year she was listed as the highest-paid actress in India. In 2018’s list of 50 most desirable women, she holds the first position. She also does a large number of brand endorsements like Maybelline, Coca-Cola, Garnier, and many more.

Aliya Bhatt, the sweet lovely girl, is one of the hіghеѕt-раіd асtrеѕѕеѕ іn B-Town.  Apart from her Bollywood career, she is mostly in. limelight, and most of the time she is caught by Paparazzi – all Reddit hoes up her boyfriends, parties, her lavish lifestyle, and of course her silly as well as controversial statements.

She is one of the most mocked actresses and has lots of memes on her name due to her bad IQ level and instant reply in the media.

Final Words for Alia Bhatt Quotes, Biography And Net Worth

Alia Bhatt showed that if we work hard and have passion then we can do anything and become successful just the way she is now. We wish Alia a great future ahead!

Arijit Singh’s Net Worth And Quotes