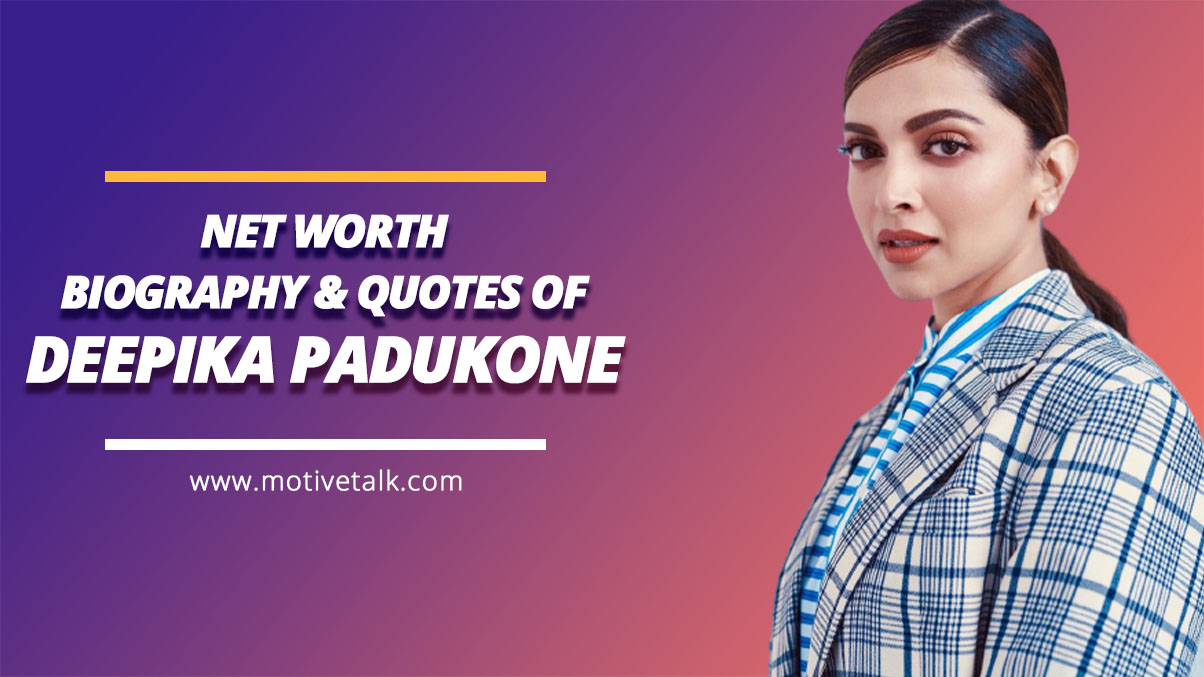 Here you will get Deepika Padukone Quotes, Net Worth (40 Million USD), and her top Movies list. Without further ado, let’s start the topic; Deepika Padukone, daughter of a famous badminton player Mr. Prakash Padukone, is one of the famous Bollywood celebrities at present. She is one of the brilliant performing highest-paid actresses of her time. She is the reigning queen of the Bollywood industry. Top actors, directors, and producers want to work with her.

She is not just popular in India but has also a large fan following overseas. In 2018, Deepika was featured in Time magazine where she was included in the list of 100 most influential people in the world. Deepika Padukone was more interested in badminton and she was a  national level player herself, but her destiny was entirely different from what she thought for herself. She was not meant to be a badminton champion. She started taking interest in the glamour world.

From her college days, she was involved in her modeling career. Her destiny brought her to the Bollywood industry.  She started her journey by being a fashion model and soon bagged an important role in a Kannada movie titled Aishwarya.

She was lucky enough to debut in her Bollywood film with none other than the Bollywood King Khan “Shahrukh Khan”. Her debut film Om Shanti Om was a blockbuster movie and Deepika was noticed and well appreciated for her acting. This film was based on a rebirth and revenge saga and Deepika was completely fit for the role.

Now let’s see her struggle in the Bollywood industry. As she was more interested in modeling, she started concentrating more on that since her school days. She aspired to be one of the popular fashion models. By 2004, she took modeling as a full-time profession which helped her in paving the way for the Bollywood industry. The day was not that far to get recognition and big brand endorsements on her way! “If two actors have an equal creative give and take between them, it translates beautifully on the screen.” ― Deepika Padukone Quotes

“I don’t like differentiating between art and commercial cinema.” ― Deepika Padukone

“I am the universe. Infinite in every direction. This is my choice.” ― Deepika Padukone Quotes “I need my man to be mine. I need attention from him. I need to be loved. I need to be nurtured. I also need peace and stability in my relationships.” ― Deepika Padukone Quotes

“I talk to my parents everyday and every move that I make, every endorsement that I do, every film that I do and my everyday activities are all discussed with them.” ― Deepika Padukone Quotes

“To me, the mind and body are one. I’m very transparent in a way, and people can very easily make out what mood I’m in.” ― Deepika Padukone “I have always been focused on my job. No profession allows you the luxury of being half-focused. If you’re not into it, you’re not there” ― Deepika Padukone Quotes

“I think what you achieve in your life is the result of your own talent and hard work.” ― Deepika Padukone

“I’m a shy person. I contradict my own profession, because Im an introvert in a very glamorous world.” ― Deepika Padukone Quotes “I have a lot of friends, but my biggest fear is loneliness. My biggest nightmare every day is to go back home alone.” ― Deepika Padukone Quotes

“I don’t think you need any kind of backing here in the industry. I think what you achieve in your life is the result of your own talent and hard work.” ― Deepika Padukone Quotes

“Relationships or not, I believe that people don’t need to know about my life beyond a certain point.” ― Deepika Padukone Maybe You Also Like: Alia Bhatt Quotes and Net Worth She was featured in Himesh Reshammiya’s popular music video “Naam Hai Tera” which helped her to bag the dream role of Shanti Priya is one of the super hit films of that year which is “Om Shanti Om“. Director Farah Khan saw her in the music video and decided to cast Dipika in her film Om Shanti Om.

She received the best debut film award for the same movie and was also nominated for the best actress award for Om Shanti Om. Since then, she has never looked back and has given hit after hit movies to this Bollywood industry. She has given lots of blockbuster super hit movies and has amazed the viewers with her acting skills and screen presence. She was in a serious relationship with Bollywood actor Ranbir Kapoor which was not a successful one. Yet, Dipika was very much serious about her relationship but it failed to disappoint. After Ranbir Kapoor, she dated one of the finest actors of Bollywood, handsome hunk Ranveer Singh. They were in a relationship for more than 6 years and tied the knot on 14th November 2018 in Italy. Now, the couple is happy and is enjoying their marital life. She is one of the successful & beautiful personalities in the Hindi film industry. With her great acting skill, she is able to create a big empire for herself.

By April 2019, her estimated net worth is around 40 USD million (Rs 295 crores). The main sources of her income are big brand endorsements, movies, and fashion products under the brand “All About You“.

With the skills she acquires and the kind of projects she takes on, so her net worth will be double & triple. She also works with several international fashion brands apart from doing Hollywood movies.

In 2018, this actress was featured in Times under 100 most influential people in the world. We wish her all the best for her upcoming projects in the Bollywood & Hollywood industry.