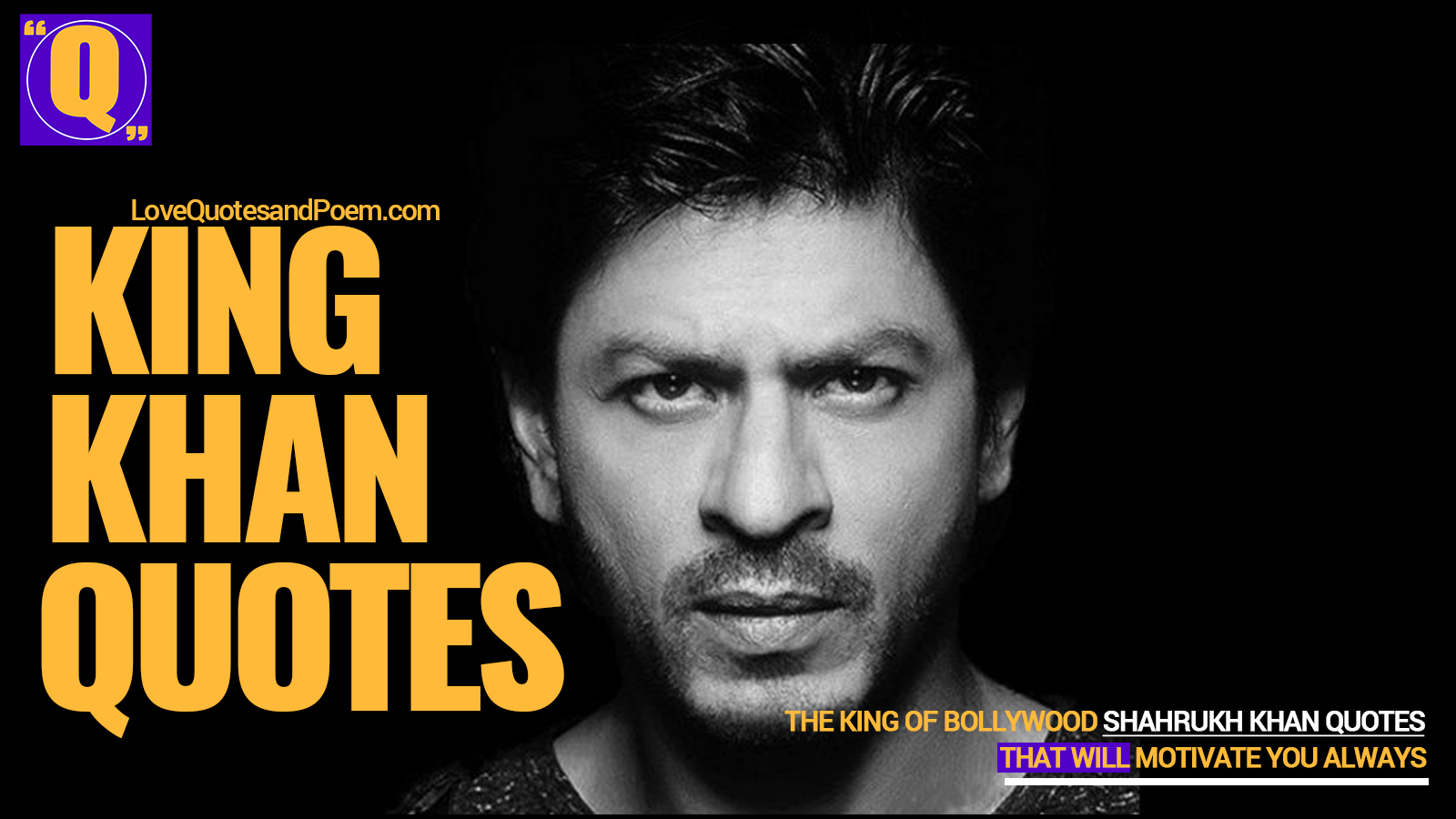 If you are searching for Shahrukh Khan Quotes, then you are in the right place. This is SRK’s biography as well.

Shahrukh Khan also named SRK. He has so many names like “King Khan“, The King Of Bollywood“. An Indian actor, film producer, and television personality was born on 02 November 1965 in New Delhi. He is a Muslim. His father is Meer Taj Mohammed Khan and his mother’s name is Latif Fatima.

SRK’s father, Mir Taj Mohammed, was 10 years older than his wife, Fatima. He was not only well educated but well-read too. He did MA, LLB, and knew six languages – Persian, Sanskrit, Pushtu, Punjabi, Hindi, and English. In fact, he was the youngest freedom fighter of his time.

SRK started his schooling from St. Columba’s High School in New Delhi. At that point in time, his father had a transportation business. SRK was good at sports as well. He was good at playing hockey and football. SRK was once quoted saying that he was quite a good student, though he never studied throughout the year. The only time he studied was the night before the exam.

After the school, Khan enrolled herself in Hansraj College Delhi to earn his bachelor’s degree in Economics. After his college, he pursued his master’s degree in mass communication at Jamia Millia Islamia University Delhi. Once SRK was quoted saying that “Education to him means being aware of everything that happens around us“.  Once he revealed that Electronics was his favorite subject. He even got the highest marks in electronics when he passed out. English and Economics were his other two favorites. Acting career: Khan started his acting career with TV shows like Fauji, Circus, Doosra Keval, Dil Dariya, Wagle ki Duniya. In Which Annie Gives It Those Ones & Mahan Karz. He later came to Mumbai to act in TV serials based in Mumbai like Circus, Ummeed and became very close to TV personalities like Saeed Mirza, Kundan Shah, and Aziz Mirza.

The first movie which was released was Deewana which was released in June 2002. He followed up with blockbuster hits like Raju Ban Gaya Gentleman, Bazigaar, Darr. He also made negative roles in movies like Darr, Ram Jaane, & Anjam.

He also made loving romance movies like Kabhi Haan Kabhi Naa, Yes Boss, Pardes, but his biggest blockbuster came when he made Dilwale Dulhania Le Jayenge under the Yash Chopra banner, directed by Aditya Chopra.

SRK later won the Filmfare Award for Best Actor for DDLG. It is the longest-running film in the history of Indian cinema. As of 2020, over 25 years after its first release, it is still being shown at the Maratha Mandir theatre in Mumbai. “Everyone has their own way of expressing happiness.” ― Shahrukh Khan

“Success and failure are both part of life. Both are not permanent. ” ― Shahrukh Khan Quotes

“The only time I don’t work is when I am asleep. ” ― Shahrukh Khan “Success is not a good teacher, failure makes you humble.” ― Shahrukh Khan

“There is only one religion in the world – hard work.” ― Shahrukh Khan “I work hard, like I’m sure everyone else does, and I’m very honest with the work I do. ” ― Shahrukh Khan

“There is no such thing as normal. Normal is just another word for lifeless.”– Shahrukh Khan

“My biggest achievement is that I can make people smile just by my presence.”– Shahrukh Khan Quotes “There might come a time when you feel lonely. That is when your creativity will be like your best friend.”– Shahrukh Khan Quotes

“A moment will come when there isn’t anything that’s going right. But don’t panic. With a little embarrassment, you will survive it. All you have to do is make a move and move on a bit.”– Shahrukh Khan

“Art is more important than the artist – have no attachment to your own art. It is regressive, move on.”– Shahrukh Khan “Every morning I wake up and think of the same thing that this is the first shot of my life so I better make it stick.” – Shahrukh Khan Quotes

“Making the mistake of thinking your dreams will take flight without you having to flap madly at those wings to get up into the sky, is plain silly.”– Shahrukh Khan “If you don’t like something don’t do it, and if you’re doing something then you better like it. It is as simple as that.” ― Shahrukh Khan

“Each time we face our fear, we gain strength, courage, and confidence in doing.” ― Shahrukh Khan “I realize that things don’t always need to be functional to fulfill a need. Sometimes when things are broken, the greatest creativity emanates from their fragments.” ― Shahrukh Khan

“If you Believe in Yourself, Things Come True.” ― Shahrukh Khan Quotes

“Youngsters are the most discerning audience. They want entertainment, they want issues.” ― Shahrukh Khan “I have lived in Mumbai for more than 20 years, have my domicile here, my home and family here.”
― Shahrukh Khan Quotes

“Cinema in India is like brushing your teeth in the morning. You can’t escape it.”
― Shahrukh Khan

“When people call me God, I say, no, I’m still an angel or saint of acting. I still have a long way to go.”
― Shahrukh Khan Quotes

“There is no right time and the right place for love, it can happen any time.”
― Top Shahrukh Khan Quotes

“I’m an actor, I’m not a politician.”
― Shahrukh Khan Quotes

“There’s a personal me, there’s an actor me and there’s a star me.”
― Shahrukh Khan Quotes

“I truly believe my job is to make sure people smile.”
― Top Shahrukh Khan Quotes

“My life may seem glamorous from the outside but off-screen it’s as ordinary as anyone else’s.”
― Shahrukh Khan Quotes

“Even though I am fantastic looking, I am still quite intelligent.”
― Shahrukh Khan

“Whether people like it or not, my marketing thought is if you keep something in front of people for too long, they get used to it.”
― Shahrukh Khan Quotes

“You can love me or hate me but you can’t ignore me.”
― Top Shahrukh Khan Quotes

“I don’t teach my children what is Hindu and what is Muslim.”
― Shahrukh Khan Quotes

“Whenever I fail as a father or husband, a toy and a diamond always work.”
― Shahrukh Khan

“I do have a close circle of friends and I am very fortunate to have them as friends. I feel very close to them I think friends are everything in life after your family. You come across lots of people all the time but you only make very few friends and you have to be true to them otherwise what’s the point in life?”
― Shahrukh Khan Quotes

“I think love can happen at any age, it has no age.”
― Top Shahrukh Khan Quotes

Shahrukh Khan is married to Gauri Khan. They have a son Aryan, and a daughter Suhana, they also became the parents of a third child, named AbRam, who was born through a surrogate mother. I guess all Shahrukh Khan Quotes will inspiring you for sure.

Amitabh Bachchan Quotes – That Will Help You Succeed In The Workplace