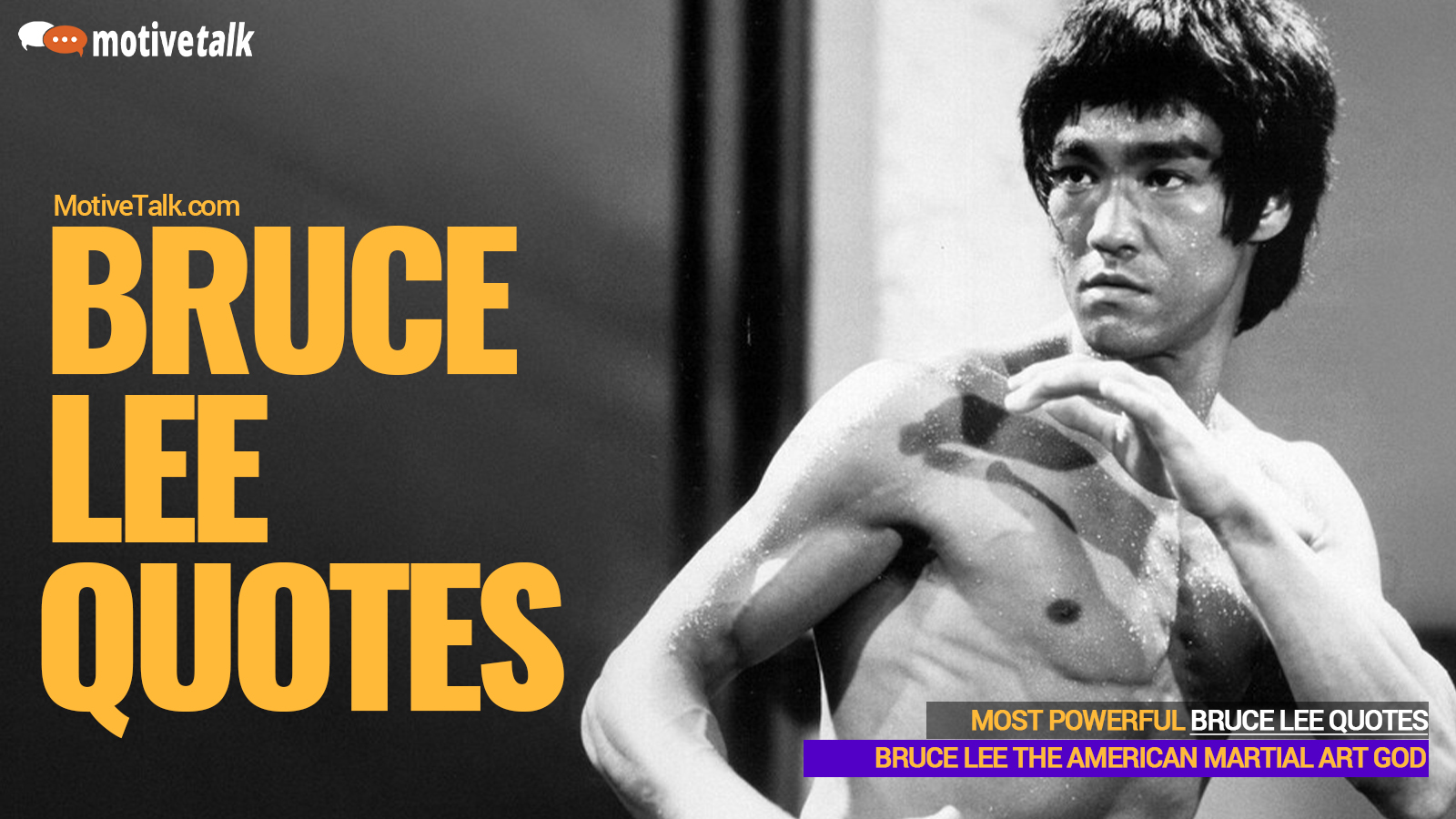 Bruce Lee is an American & Chinese martial artist. In this article, you will get 20+ very inspiring and best Bruce Lee Quotes. All Quotes from Bruce Lee are very motivating for everyone.

Born on 27th November 1940 Bruce Lee was one of the greatest martial artist and movie actors. Though he died at the young age of 32 he is still considered one of the most influential people in the world who inspired many generations to achieve big in life.

He was a true hero both in real life as well as reel life. People keep on fighting with competitors all their lives without realizing that true competitor is themselves. Always work hard to achieve big in life by self improvisation. He inspired us to not waste energy in defeating others but focus all your energy on improving ourselves.

He never asked people to look for a role model in their life so that they can replicate their path and get success. He inspired people to believe in themselves and inspire them to achieve your goals. I have believed in your faith and values so that others also believe it.

Lee Hoi-Chuen his father was an artist in opera music and film and it was his father who introduced him to the movie world. His mother Grace Ho was a housewife. Bruce Lee was the couple’s fourth child and when he was three years old the family returned to Hong Kong. He used to work as a child artist in movies.

He completed his Primary education from Tak Sun School and high school at St. Francis Xavier’s College. He learned boxing from Brother Edward in his school days who use to teach boxing to school teams. In 1958 at the age of 18, he won the “Kung Fu Fighting” tournament which was a boxing competition held for school level boxing championship and proved his potential.

His parents got worried about him as he was caught by the police in a serious fight in Hong Kong and did not wish him to carry out his martial arts training any further as his abilities could be fatal to others.

He was a USA citizen so he moved there with his sister to complete his graduation. He used to give part-time martial arts coaching to people where he met his future wife Linda. She was not only his good student but also quite beautiful and he later married her. The couple was blessed with two children, Brandon Lee (late) and Shannon Lee.

He was Hollywood’s first martial arts superstar who gained popularity worldwide. He earned name and fame and influenced many people with his hard work and won their hearts.

In 2014 he was voted as the best fighter who lived on earth. Time’s Magazine has enlisted him in the list of 100 most influential people in the world. He was not only an actor, but also an accomplished writer, director, screenwriter, and philosopher. His movies are still considered a masterpiece. “Life’s battles don’t always go to the stronger or faster man. But sooner or later the man who wins, is the man who thinks he can.” ― Bruce Lee Quotes

“A wise man can learn more from a foolish question than a fool can learn from a wise answer.” ― Inspiring Bruce Lee Quotes

“In order to control myself I must first accept myself by going with and not against my nature.” ― Bruce Lee Quotes “Mistakes are always forgivable, if one has the courage to admit them.” ― Motivating Bruce Lee Quotes

“Don’t pray for an easy life. Pray for the strength to endure a difficult one.” ― Motivating Bruce Lee Quotes

“Love is like a friendship caught on fire. In the beginning a flame, very pretty, often hot and fierce, but still only light and flickering. As love grows older, our hearts mature and our love becomes as coals, deep-burning and unquenchable.” ― Quotes of Bruce Lee

“Life itself is your teacher, and you are in a state of constant learning.” ― Quotes of Bruce Lee

“Balance your thoughts with action. If you spend too much time thinking about a thing, you’ll never get it done.” ― Quotes of Bruce Lee Rest 10 Quotes of Bruce Lee is Below

“Learning is never cumulative, it is a movement of knowing which has no beginning and no end.” ― Bruce Lee Quotes

“Simplicity is the key to brilliance.” ― Inspiring Bruce Lee Quotes

“The spirit of the individual is determined by his dominating thought habits.” ― Motivating Bruce Lee Quotes

“Do not allow negative thoughts to enter your mind for they are the weeds that strangle confidence.” ― Bruce Lee Quotes

“Life is never stagnation. It is constant movement, un-rhythmic movement, as we as constant change. Things live by moving and gain strength as they go.” ― Quotes of Bruce Lee “Use only that which works, and take it from any place you can find it.” ― Inspiring Bruce Lee Quotes

“There is “what is” only when there is no comparing and to live with “what is” is to be peaceful.” ― Inspiring Bruce Lee Quotes

“For it is easy to criticize and break down the spirit of others, but to know yourself takes a lifetime.” ― Quotes of Bruce Lee

“If you always put limits on everything you do, physical or anything else, it will spread into your work and into your life. There are no limits. There are only plateaus, and you must not stay there, you must go beyond them.” ― Quotes of Bruce Lee

“Notice that the stiffest tree is most easily cracked, while the bamboo or willow survives by bending with the wind.” ― Inspiring Bruce Lee Quotes “If there is a God, he is within. You don’t ask God to give you things, you depend on God for your inner theme.” ― Motivating Bruce Lee Quotes

“Defeat is a state of mind; No one is ever defeated until defeat has been accepted as a reality.” ― Inspiring Bruce Lee Quotes

“The stillness in stillness is not the real stillness; only when there is stillness in movement does the universal rhythm manifest.” ― Quotes of Bruce Lee

“Always be yourself, express yourself, have faith in yourself, do not go out and look for a successful personality and duplicate it.” ― Motivating Bruce Lee Quotes He had the ability of thinking out of the box which made him successful at every path of his life. He inspired everyone to believe in their dreams which can be achieved through hard work. Share quotes to inspire yourself and your friends & family.

Please let me know in the comments section, what is your favorite quotes?