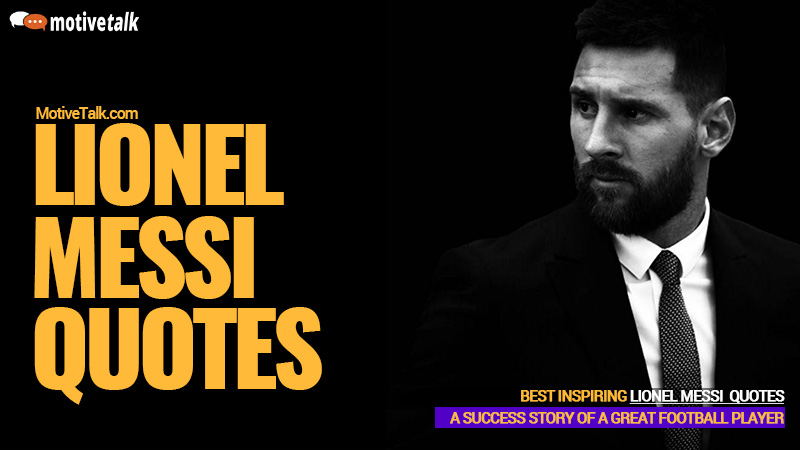 In this blog post, we will discuss Lionel Messi’s life. A short biography, the Best Lionel Messi Quotes, and his Success Story. Let’s start now;

Lionel Andrés Messi(Leo) or popularly known as Lionel Messi was born on 24th June 1987 in Rosario, Argentina. His father’s name was Jorge Messi, he worked as a steel factory manager. His mother Celia Cuccittini worked at a magnet manufacturing shop.

He had a passion for football from a very young age and joined Local Club Grandoli at the age of 4. Messi changed his club at the age of six and joined Rosario Club. At the age of ten, he was diagnosed with growth hormone deficiency.

The Barcelona Club in Spain agreed to pay for the medical expenses required for his treatment and was then shifted to Spain when he was 13 years old.

Professionally he has played for the Barcelona club throughout his career. He is a constructive goal scorer and the at the same time creative play-maker.

In 2005 he won the FIFA World Youth Championship and in 2008 during Summer Olympics he won Olympic Gold Medal. He is the highest-paid professional sports star along with Ronaldo and also earns a large sum through endorsements.

He is famously known for his endorsement of Adidas. He is quite skilled and skillful on the field despite his height of 5’7″ and weighing 67kg. He maintains his balance quite well on the field and manages both teams quite efficiently.

Under his captaincy, Barcelona has won many championships. He is a left-footed player and easily controls the ball and passes the ball to other players without any difficulty.

Over the years his game has notably improved along with his team management skills.

He was the highest-paid football player in France for five consecutive years. In 2011 and 2012 Time Magazine enlisted in the list of  “Most Influential People In The World”.

In 2016 he took retirement from active football but at his Fan’s request, he returned in 2018.

Under his Leadership, the Barcelona team qualified for the 2018 FIFA World Cup and attained the third position in the 2019 Copa America.

On 30th June 2017, Lionel Messi married his childhood sweetheart Antonella Roccuzzo whom he has known from the age of five.

The couple is blessed with three sons Thiago, Mateo, and Ciro. He is a renowned philanthropist and throughout his career, he is associated with many charities and is noted for his charitable works. “This is why I didn’t go out to parties and many other things. I am successful because I made sacrifices for success.” ― Lionel Messi Quotes

“I go out and do the best I can in each game, and I don’t think about the fouls other players will commit or whether I might be injured. It only does you harm to worry about those things.” ― Lionel Messi Quotes

“What I do is play soccer, which is what I like.” ― Lionel Messi Quotes “Whether it’s a friendly match, or for points, or a final, or any game, I play the same. I’m always trying to be my best, first for my team, for myself, for the fans, and to try and win. ‎” ― Quotes of Lionel Messi

“I like to score goals but I also like to have friends among the people I have played with.” ― Motivational Lionel Messi Quotes

“Some people say my style of play is innate, but I’m not sure if that’s me or not. Honestly, I do play on instinct. On the pitch, I’m always looking for the best move or decision at any given time. I never want to do what the opposition would be expecting.” ― Quotes of Lionel Messi “I think my desire to always get better, to always want more, to always be my top critic, and accepting the good and the bad.” ― Lionel Messi Quotes

“Goals are only important if they win games.” ― Quotes of Lionel Messi

“When the year starts the objective is to win it all with the team, personal records are secondary.” ― Lionel Messi Quotes “Every year I try to grow as a player and not get stuck in a rut. I try to improve my game in every way possible. But that trait is not something I’ve worked on, it’s part of me.‎” ― Quotes of Lionel Messi

“Being named among the best at something is special and beautiful. But if there are no titles, nothing is won.” ― Motivational Lionel Messi Quotes

“My ambition is always to get better and better.” ― Lionel Messi Quotes “Barcelona is my life, they have brought me to where I am today, I could not leave, I don’t want to leave. My heart stays with Barcelona.” ― Motivational Lionel Messi Quotes

“I still have a lot of room for improvement. For example, I want to shoot equally well with both feet.” ― Quotes of Lionel Messi

“I’m never satisfied. I always push my limits and I always try to get better every day.” ― Lionel Messi Quotes “I have fun like a child in the street. When the day comes when I’m not enjoying it, I will leave football.‎” ― Quotes of Lionel Messi

“Everything that’s happened to me in my career has been special, even the tough times because they leave marks on you that shape your life.” ― Motivational Lionel Messi Quotes

“I don’t know, I’ve liked football since I was a kid and I’ve always dreamt of becoming a professional footballer, I never thought of any other job.” ― Lionel Messi Quotes “On a personal note, I think it won’t be until after I’ve retired that I’m fully aware of what I’ve done or what I’ve gone on to achieve in my career.” ― Motivational Lionel Messi Quotes

“Sometimes you have to accept you can’t win all the time.” ― Quotes of Lionel Messi

“You cannot allow your desire to be a winner to be diminished by achieving success before and I believe there is room for improvement in every sportsman.” ― Quotes of Lionel Messi “This is much more than I dreamed about as a boy. I want to thank football in general for what it has given me.” ― Quotes of Lionel Messi “To be honest, I never realized it. I never really thought that I was going to be really good or not. I just wanted to make my dream come true.” ― Quotes of Lionel Messi

As of 2019 his net worth was assumed to be $400 million which brings in the top list of richest sports players in the world.

He is a leading goal scorer who breaks many records of the previous players in this field.

With the help of Adidas, he has been established as the brand ambassador of many endorsements which earns him a lot of revenue.

He established his charitable trust in 2007 known as The Leo Messi Foundation which works towards children’s sports, education, and health care.

In 2010 UNICEF appointed him their Goodwill ambassador and he makes a lot of contributions to the association.