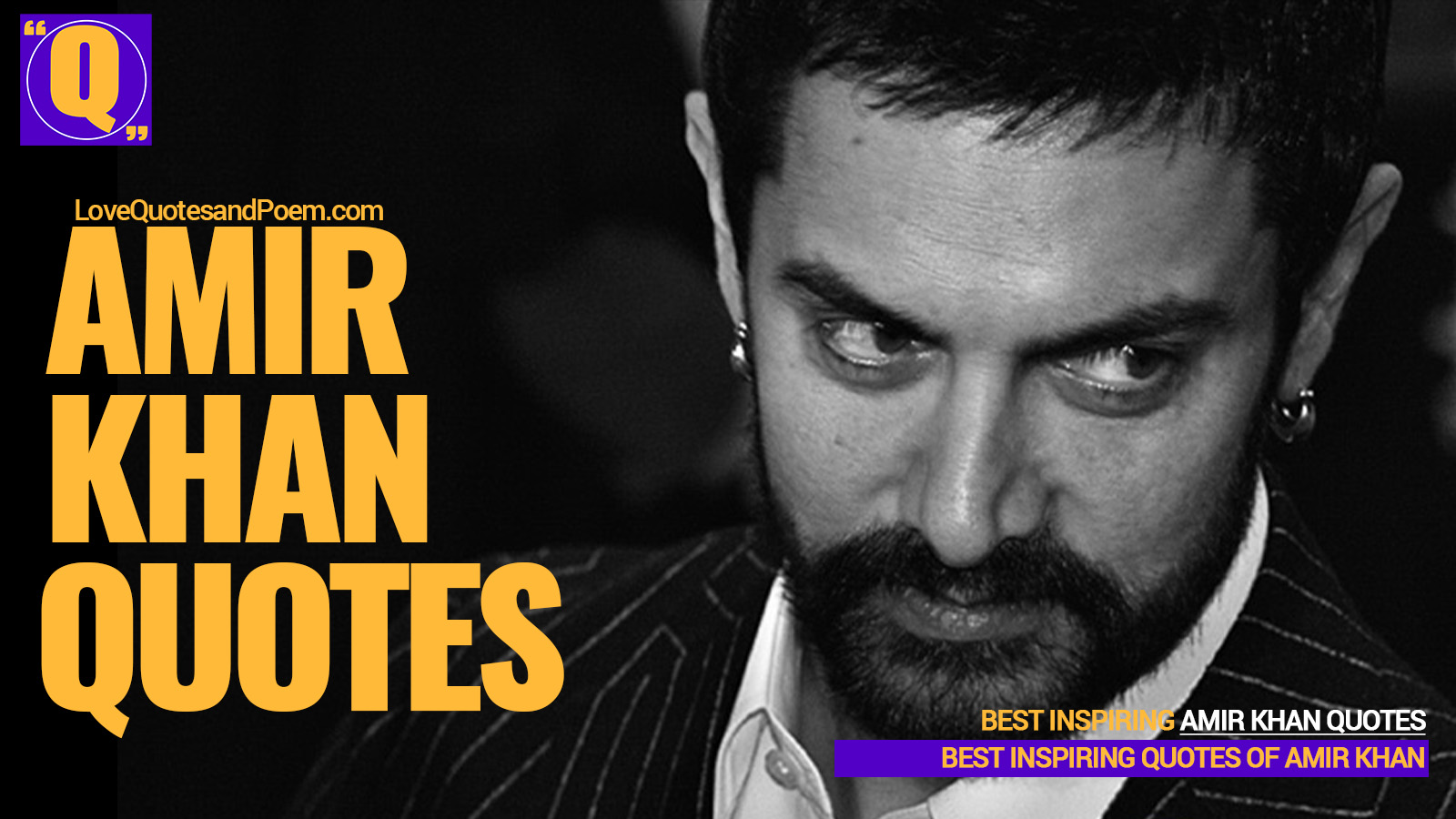 His father was a famous Bollywood producer Tahir Hussain and his mother’s name was Zeenat Hussain. He has three kinfolk brothers Faisal Khan and two sisters Farhat and Nikhat Khan.

Aamir Khan is a well-known and influential actor who is recognized and popular on both the National and International levels. He has proven his talent with his acting skills and choice of movies most of which have been box-office hit. He is quite appreciated in the industry for his professionalism and works on only one project at a time.

He began his acting career when he was only 8 years old in the movie Yaadon Ki Baarat where he appeared as a child actor.

He gained recognition in the industry through his movie Qyamat Se Qyamat tak which won him the Best Male Debut Trophy in the Filmfare Awards. The movie bagged a total of seven awards in the Filmfare. He created a romantic hero image for himself after acting in movies like Dil(1990), Jo Jeeta Wahi Sikandar, and Dil Hai Ki Manta Nahi.

He also acted in many comedy genre movies like Andaz Apna Apna, Raja Hindustani, and Ishq and established himself as a versatile actor. His actual fame with the internationally recognized movie Lagaan(2001) which is considered a Landmark movie in Indian cinema. The movie got a nomination in the Academy Awards in the best foreign-language film category.

The list of his Highest grossing movies at the Box office includes Taare Zameen Par, 3Idiots(2009), PK(2014), and Dangal. Dangal is the real-life story of Mahavir Singh Phogat and his struggles to establish his daughters as International Wrestling Champions.

“Satyamev Jayate” was the television debut for the professional actor. The show focused on the social issues prevalent in India and how people are dealing with them. He tried to show the social problems prevalent in-country and how the people are getting affected by them. Apart from this, he suggested many expert opinions on how these problems can be solved in the country. He was highly appreciated for his efforts to bring a change in society.

In 2010, he was awarded the country’s highest civilian award Padma Bhushan. He is quite known for his humanitarian works and has founded the “Paani Foundation” with his wife Kiran Rao. The NGO works in Maharashtra in the area of drought and also helps in watershed Management. UNICEF has delegated him as the brand ambassador for Child Nutrition and care.

“I am raising my voice as a citizen of the country. I don’t want to enter politics.” ― Aamir Khan

“Our society covers these problems with a veil. All I want is an open discussion.” ― Aamir Khan 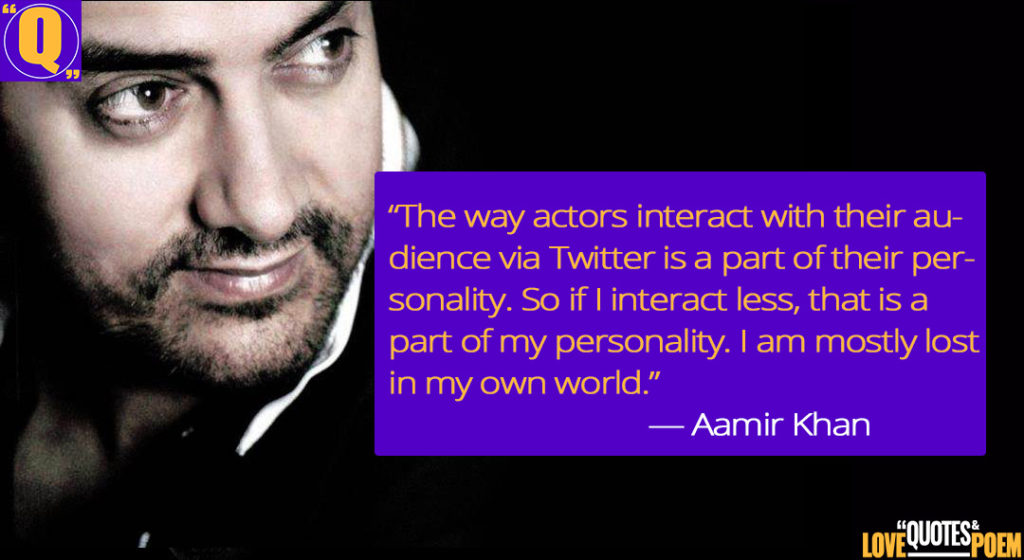 “Film making is like fighting a war with leadership at the front.” ― Aamir Khan

“If need be, I will even meet the Prime Minister. But I want the people who are at the receiving end and who know the problems first-hand to talk to him.” ― Aamir Khan

“Badminton is like ballet dancing. It requires a lot of control, strength, mind play and measured movement.” ― Aamir Khan 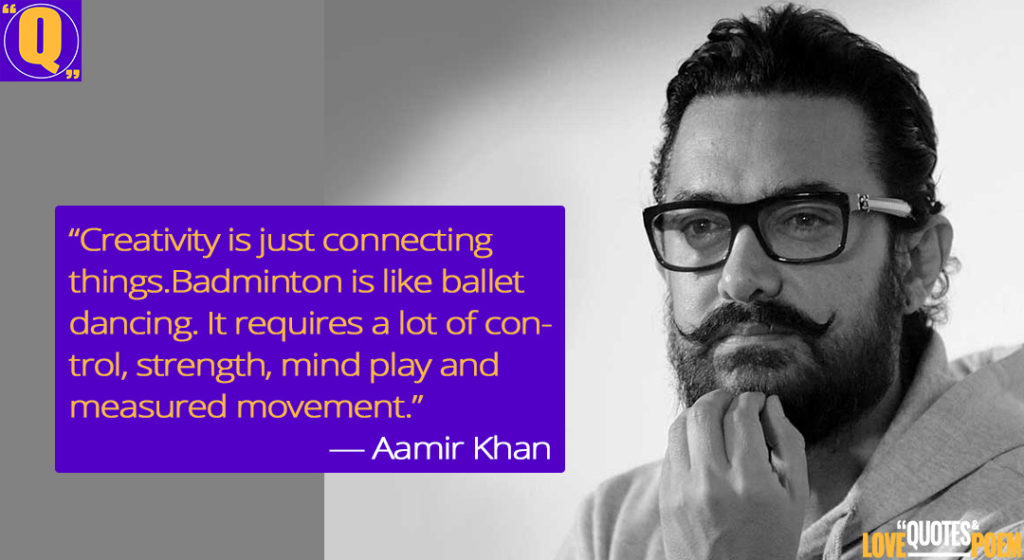 “I don’t believe in strategies. I love what I am doing, that’s the main thing.” ― Aamir Khan Quotes

“I personally feel that I should support people who are doing good work and people should also support such good work.” ― Aamir Khan

“When I was new, I didn’t know where my career will go. Initially, my films were not even successful, but then I learned a lot from my mistakes.” ― Aamir Khan Quotes 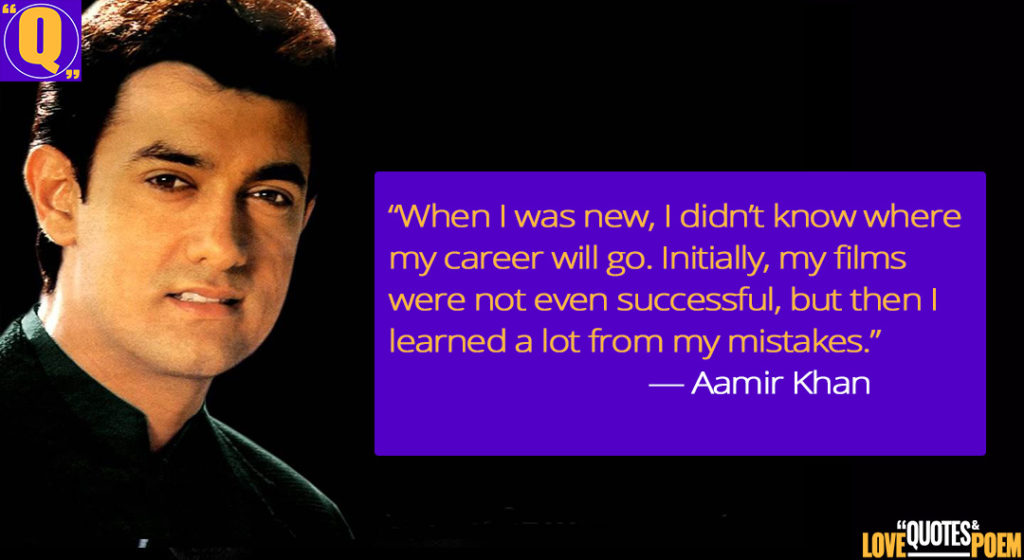 “I enjoy the love I receive from my fans and my audience. But I think I know what is real for me and what is not.” ― Aamir Khan

“I am happy that I have entertained people and made them happy.” ― Aamir Khan Quotes

“The journey that I have undertaken, meeting people from all walks of life and learning from them, has been my biggest achievement.” ― Aamir Khan 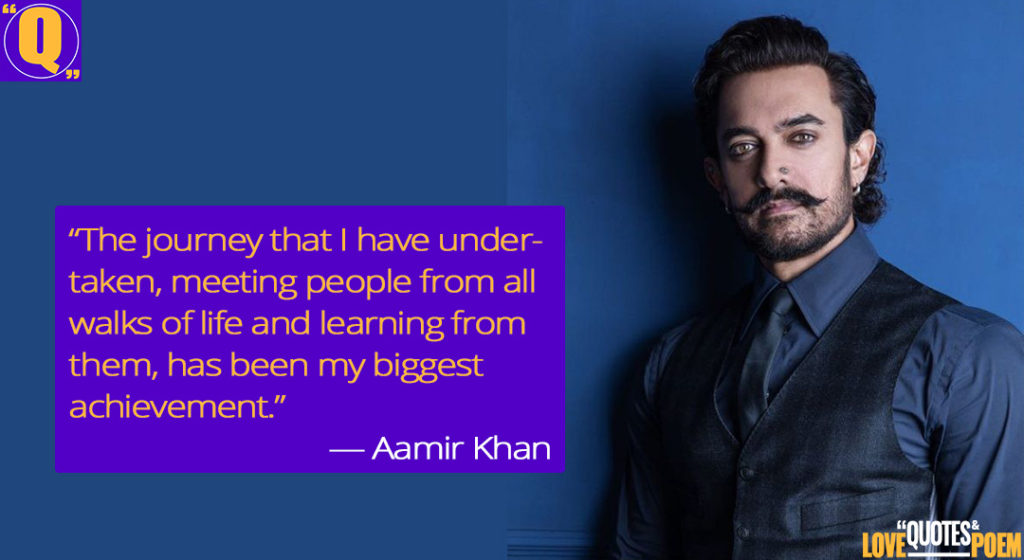 12 Aamir Khan Quotes are Above

“I Am More Spiritual Than Religious; Besides I Am Not A Fanatic.” ― Aamir Khan

“I do what I feel is right. I do not fear to walk on a new path and take risk.” ― Aamir Khan

“I have had unsuccessful films, but I learned a lot from those films. I give my failures as much importance as my success.” ― Aamir Khan Quotes “When I am shooting a film, then everything goes soft focus. My family also complains that I don’t give them time.” ― Aamir Khan

“I feel that, in India, we have films that have tackled various issues over the years, but perhaps one of the issues that we’ve tackled less is the issue of caste-ism. That’s an issue we’ve more or less stayed away from… although we touched on it briefly in some films like ‘Lagaan.’” ― Aamir Khan 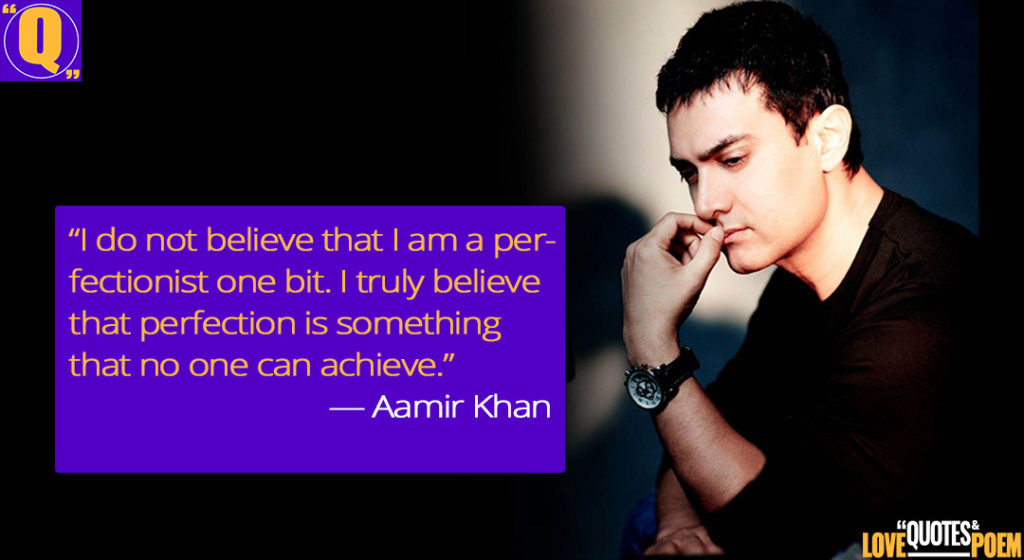 “If a script has that effect on me during a reading, then it is definitely a film I want to be part of.” ― Aamir Khan

“I am not a perfectionist. Perfection doesn’t exist in real life. It’s the wrong title for me.” ― Aamir Khan

“I am not a perfectionist. Perfection doesn’t exist in real life. It’s the wrong title for me.” ― Aamir Khan “For me, acting is not a job. It is something I love. I don’t do these things for awards or rewards. I do them because I love challenges.”
― Aamir Khan

Last 6 Aamir Khan Quotes are Below

“My films are so new and unique that I don’t know where I will end up. Fear keeps me alert. And it’s also a part of an excitement.”
― Aamir Khan Quotes

“If a script has that affect on me during a reading, then it is definitely a film I want to be part of.”
― Aamir Khan

“When I prepare for a role, I try to get inside the character’s head and understand him.”
― Top Aamir Khan Quotes

“Education is very important. Maybe it in a formal way or an informal way.”
― Aamir Khan Quotes

“What I have learned in sports, useful in my real life.”
― Aamir Khan

“What failure teaches you is the biggest lesson in your life.”
― Top Aamir Khan Quotes

Aamir Khan through his humanitarian works and shows works hard for the upliftment of society. Aamir Khan’s quotes are a source of inspiration for the youth to inculcate a positive attitude in their actions.

Popularly known as the “Mr. Perfectionist” his movies depict his versatile style and also convey a positive message to the society.

Some Famous Movies of Aamir Khan:

Amitabh Bachchan Quotes – That Will Help You Succeed In The Workplace