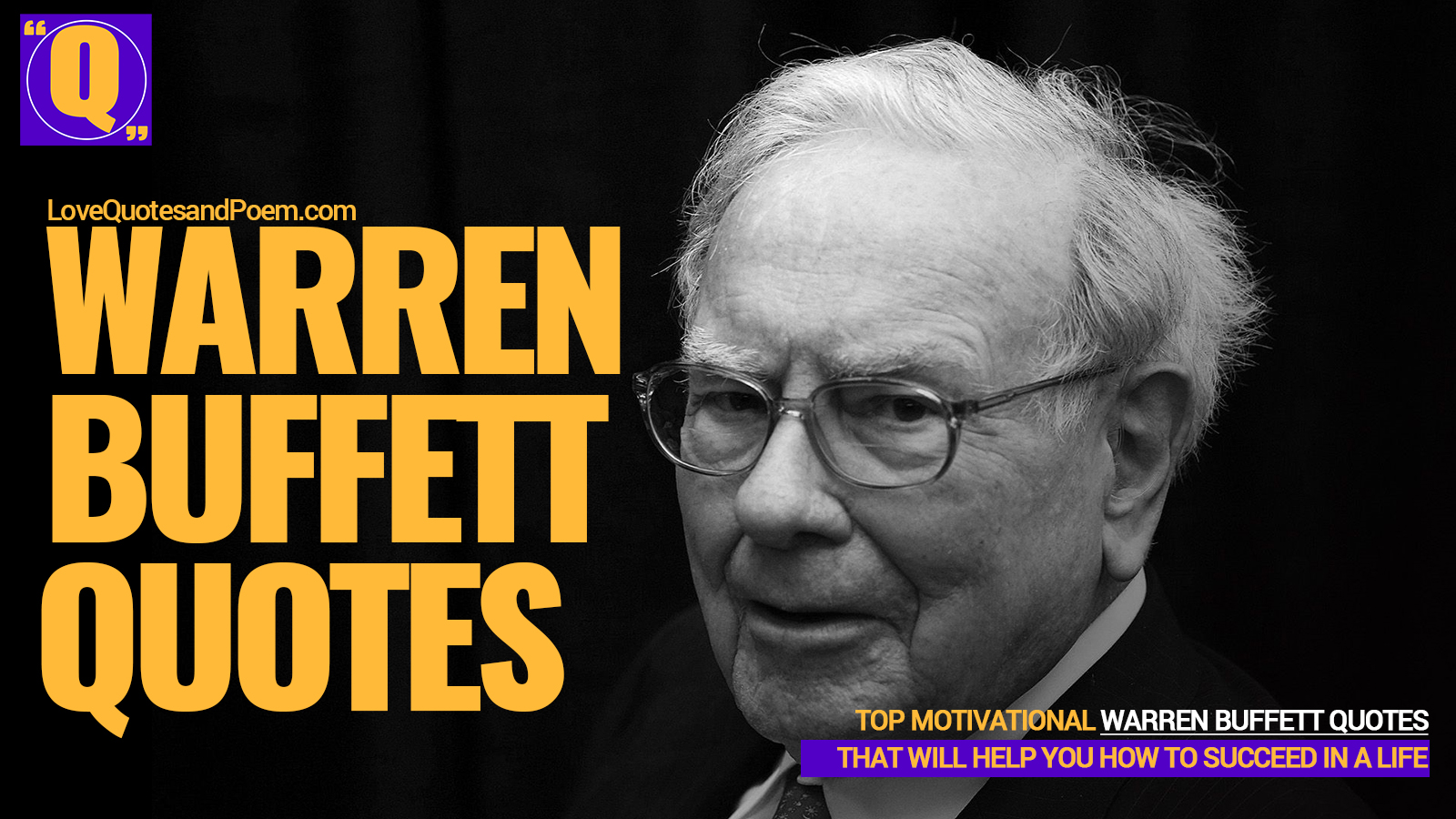 Warren Buffett is a world-famous businessman from the USA. His short biography and Warren Buffett Quotes, you will get from here. So let start from the starting;

Warren Buffett Birth: Warren Edward Buffet is an American businessman and philanthropist born on 30 August 1930 in Omaha, U.S. He is acknowledged as the CEO of Berkshire Hathaway and a philanthropist. At a young age after reading “One Thousand Ways To Make Money” he got inspired and developed a life goal to become rich.

He did not accumulate all his wealth in one day but it is his hard work done throughout his life which helped him to accumulate enormous wealth. His famous words for his life journey that if you see someone under shade is because they planted a tree a long time ago truly describes his inner vision.

His father Howard Buffett was a leader and member of Republican whereas and his mother Leila Stahl Buffett was a housewife. He was interested in doing business from an early age but was disregarded by his father who pursued him to first complete his education. During his childhood days, he used to sell Coca-Cola, chewing gum & newspaper, and helped his father in their grocery store.

His father was a stockbroker and he acquired trading knowledge from him. During his school days, he used to make $175 a month, and in high school the income raised to $1200 and by the end of his education, he was already making $10000 a month.

He married Susan Thompson and had three children together Susan Alice Buffett, Howard Graham Buffett, and Peter Buffett. He started living separately from his wife from 1977 but remained married until she died in 2004.

His second wife Astrid Menks whom he married in 2006 on his 76 birthday was his companion living with him for a long time and was already sixty years old when they got married. He loves to play the ukulele and is famous for playing the instrument sometimes at the shareholder meeting.

He believes in Simple Living and High Thinking lifestyle and is against spending money to live a lavish style. He openly criticizes government policies which are designed to assist the rich people only. He has vowed to donate 80% of how wealth and donates his money to foundations like Bill & Melinda Gates Foundation which focus on health and education. He also donates to the charitable foundations established by his children Susan A. Buffett Foundation which focuses on women’s reproduction and health.

Saving money and investing it judicially is his childhood hobby. His childhood hobby has helped him to accumulate the wealth which he owns today. His quotes work as a motivation to invest in the stock market wisely and to develop a habit of saving and spending money wisely.

“Investors should remember that excitement and expenses are their enemies.” ― Warren Buffett

“Cash is to a business as oxygen is to an individual: never thought about when it is present, the only thing in mind when it is absent.” ― Warren Buffett Quotes “Whether we’re talking about socks or stocks, I like buying quality merchandise when it is marked down.” ― Warren Buffett 6 Inspiring Warren Buffett Quotes Are Above

“Only when the tide goes out do you discover who’s been swimming naked.” ― Warren Buffett

“Wall Street is the only place that people ride to in a Rolls Royce to get advice from those who take the subway.” ― Warren Buffett

“When trillions of dollars are managed by Wall Streeters charging high fees, it will usually be the managers who reap outsized profits, not the clients.” ― Warren Buffett Quotes “Speculation is most dangerous when it looks easiest.” ― Warren Buffett Quotes

“Someone’s sitting in the shade today because someone planted a tree a long time ago.” ― Warren Buffett

“Buy a stock the way you would buy a house. Understand and like it such that you’d be content to own it in the absence of any market.” ― Warren Buffett “An investor should act as though he had a lifetime decision card with just twenty punches on it.” ― Warren Buffett

“If you aren’t willing to own a stock for ten years, don’t even think about owning it for ten minutes.” ― Warren Buffett Quotes

“When we own portions of outstanding businesses with outstanding managements, our favorite holding period is forever.” ― Warren Buffett “Do not take yearly results too seriously. Instead, focus on four- or five-year averages.” ― Warren Buffett

“American business – and consequently a basket of stocks – is virtually certain to be worth far more in the years ahead.” ― Warren Buffett Quotes

“The stock market is a no-called-strike game. You don’t have to swing at everything — you can wait for your pitch.” ― Warren Buffett “The most important thing to do if you find yourself in a hole is to stop digging.” ― Warren Buffett

“I just sit in my office and read all day.” ― Warren Buffett

“You are neither right nor wrong because the crowd disagrees with you. You are right because your data and reasoning are right.” ― Warren Buffett “In the business world, the rearview mirror is always clearer than the windshield.” ― Warren Buffett “Remember that the stock market is a manic depressive.” ― Warren Buffett

“Time is the friend of the wonderful company, the enemy of the mediocre.” ― Warren Buffett

“The three most important words in investing are ‘MARGIN OF SAFETY’.” ― Warren Buffett Quotes

“Never invest in a business you cannot understand.” ― Warren Buffett

President Barrack Obama awarded the Presidential Medal Of Freedom to Warren Buffet in 2011 for his contribution to the society. He is not only a shrewd businessman but also a respectable personality who is loved and honored by everyone.

He holds the second position on the list of people concerned with charities. He always guides people to save, spend, and invest money judicially.